Why I Choose to Be Vulnerable

Our latest piece comes from Brother Luck, chef/owner of Lucky Dumpling and Four By Brother Luck in Colorado Springs, Colorado and two-time Top Chef contestant. Below, the Chefs Boot Camp for Policy and Change alum shares his struggles with depression and suicidal thoughts, and how his time on television inspired him to make positive mental health a priority for himself, and for the hospitality industry as a whole.

“Brother, please pack your knives and go.” Padma Lakshmi stares directly into my eyes as she bids me another farewell. I’m overwhelmed by feelings of disappointment in myself and mental exhaustion—again. A second-chance loser.

I’ve just lost Bravo’s Top Chef for the second time in a year. Why did I say yes when the producers asked me to come back for another season? Why was it so important that I prove myself on this show, regardless of how that choice would affect others?

Standing in front of the judges’ table, I’m graciously thanking Tom Colicchio, Padma, Graham Elliot, and Ken Oringer for the opportunity, but inside I am completely broken. I keep it together as I slowly walk off the set, but I’m telling myself that I had never been good enough to be there or have a chance of winning. I don’t come from a high-profile, Michelin-starred restaurant, or have the endorsement of working for a celebrity chef. I am simply an ordinary chef with large-volume production experience. I may have a ton of heart, but I am an imposter.

As I walk into the trailer to film my exit interview, I begin to break down. “I’m done, I can’t do this anymore, I can’t keep feeling rejected, ” I tell the show’s producer. My entire tough-guy persona—the “Last Chance Kitchen Bogeyman”—begins to wash away, revealing a scared man who doesn’t know how to handle this surge of emotion. I’ve just completed a historic run on Last Chance Kitchen (LCK), earning a spot back in the contest, only to be kicked off Top Chef on the very same episode. The producers are already suggesting that I can do it again and regain my title as LCK champion, but how many last chances do I get before it’s really over? I start hyperventilating; my anxiety skyrockets. I can’t keep putting myself through this gauntlet for the benefit of entertaining strangers. For the first time in a long time, I am truly scared about where that path would lead me.

About two years ago, my therapist diagnosed me with post-traumatic stress disorder (PTSD). I laughed and told him that I’d never enlisted or seen active duty like many of my military friends who “actually suffer from PTSD.” He pointed to the scars left by my childhood: the death of my father; the loss of relationships with my remaining family members; the constant presence of violence in my adolescence; the abuse from those who should have been protecting me. Although I wasn’t aware of it at the time, I developed a victim’s mentality at a very young age, becoming a survivalist in stressful situations. My greatest strength—my endless perseverance—was actually fueled by pain and anger. Every time I tapped into those feelings to “get it done,” I suffered from serious mental exhaustion. I had built some strong walls around my heart, and my brain could no longer sustain the pressure of guarding my emotions.

Losing Top Chef for the second time finally crumbled all of my defenses, uncovering my biggest insecurity: feeling undeserving of happiness or love.

When Padma tells you to “pack your knives and go,” it begins what the producers call “the cool-down process.” My first cool-down was pure rage—I paced the exit interview room like a caged lion. The second time I had the exact opposite response, which caught me off guard and scared me.

After finishing my second exit interview and stating that I would not be returning to LCK, I was placed back into sequester. Being sequestered after an elimination on Top Chef is part of the competition, and I thought I knew what to expect from my experience during the previous season. The problem is that, once you’re eliminated, you don’t get to go home and refuel. It’s a six- to eight-week commitment, which means you’re stuck in a hotel room until the production team is ready to film the next round of LCK.

I knew that I was dealing with a serious episode of depression, and I wanted everyone to feel my pain. I’m sure that I was miserable to be around, but inside I couldn’t shake the need to be distant. Even calling my wife didn’t relieve the anger or sadness. Living in that hotel room and feeling like nobody cared about me sparked memories of childhood neglect. I struggled with thoughts of suicide because it felt like the only way someone would finally pay attention. I was alone, scared, and cornered by my personal demons.

I spoke to the network’s therapist and shared my need to leave. I had to get back to an environment where I felt people cared about me. The next morning, the news broke that Anthony Bourdain had committed suicide. I watched the details unfold on television alone in my room and began to cry. I don’t know if that morning was divine intervention, but I’m grateful that it forced me to confront my downward spiral. I sat in that lonely hotel room all day drinking whiskey and refusing to be cooperative or approachable. Eventually, production agreed that I would be allowed to go home.

Returning to Colorado didn’t magically ease my depression. I pushed others away and distracted myself by staying busy. I immediately went to my restaurant and packed up for a nonstop week of events: cooking at Aspen Food and Wine, flying to New York City to participate in a James Beard House dinner, and then serving hundreds at Denver Cochon.

My wife was the one who suffered the most during this time. She had to watch me destroy myself and pray that I wouldn’t be the cause of my own demise. Finally, she convinced me to talk to my therapist. I spoke with him about my feelings of neglect, being suicidal during sequester, and overworking myself because I was too scared to be alone with my thoughts. I knew that I was being harmful to myself and justified it by pretending I was just working hard to become successful.

My therapist’s response surprised me. He told me that even though I’ve struggled with these emotions for years, this was most likely the first time I had ever chosen a different coping mechanism. Before, I had always picked loneliness, telling myself I was too busy to build relationships that required me to put in additional work or offer trust. Now, I saw that there were people in my life who cared about my well-being, and I finally wanted to embrace their love and support. My challenge was to start being vulnerable.

I left my therapist’s office that rainy afternoon telling myself that I wanted and deserved to be happy. Staring at my reflection in the rearview mirror of my truck, I made a pact with myself: “Brother Luck, you don’t want to die, because people really love you for just being you. Embrace them, trust them, and be proud of who you’ve become.”

A few months later, I’m standing in a 200-year-old dairy barn in the Hudson Valley, watching a lamb get slaughtered. The James Beard Foundation has invited me out for their Chefs Boot Camp for Policy and Change. I start talking to a Foundation staff member about my struggles and how important I believe it is to talk about mental health. As we’re chatting, I notice that a young cook is listening to our conversation. She starts to cry.

She tells me that she recently gave up cooking because it was causing so much damage to her mental health. The aggressive, fast paced, male-dominated kitchens that she had been working in felt like a bad career decision, and she was in the middle of taking a break to reevaluate her life. This young cook thanked me, explaining that she’d “never heard a chef talk about being vulnerable so openly.”

When I step back and look at the past year, I realize that I’m no longer the same person who had that mental break on the Top Chef set in Kentucky. Competing on Top Chef was always a dream of mine, and I’m so grateful that was I able to accomplish that goal. But now I’m done chasing validation and begging others to accept me. My idea of success is maintaining my priorities of faith, family, and work, in exactly that order.

Acknowledging that depression, insecurity, and anxiety are a part of my life has made me aware of the need to not only find help for myself, but also for others. I want them to know that it’s okay to be scared, anxious, or depressed, because you’re not alone. Many people are going through similar feelings, but most just hide it because they’re not ready to deal with it yet. The only way to really help someone who’s dealing with mental health issues is to share your own story and make them feel less crazy.

I started my journey by speaking up when I felt most uncomfortable—when I most wanted to stay quiet or hold in the pain.  Advocating for mental health around the country in front of students, soldiers, industry colleagues, or troubled adolescents means I constantly have to relive my pain in public. But over and over, I’m told that someone has now found courage or hope.

I’m done chasing validation and begging others to accept me.

I now understand that my story is meant to be shared. I’m no longer ashamed of who I really am, and I don’t want to hide behind a mask and keep the world from meeting the real Brother Luck. Our industry is full of broken and damaged people who are numbing their pain through alcohol, drugs, violence, or solitude. I’m amazed by the opportunities out there to make an impact in someone’s life. Just within my own restaurants, I can add value to the lives of my team members by simply slowing down and listening.

I believe we can achieve real change in the industry, even if we just make a few shifts in how we run our businesses. Inspired by the practices of another restaurant group in Colorado, I recently introduced #soberweek to my restaurants. It’s a personal challenge to the whole staff to not consume alcohol, promote shift drinks, or engage in after-service social hours for seven days. Instead, we offer early morning activities like yoga in the restaurant, volunteering at a rescue mission, or hiking in the mountains to discourage the late nights that we’ve all become accustomed to. My hope is to raise awareness and promote a healthy mental and physical lifestyle for industry employees. The restaurant business has always glorified harsh working conditions, long work hours, and addiction, but I think it’s time for change. Our past will always be a part of who we are, but it doesn’t have to define who we can become.

Learn more about how you can support better mental health in the restaurant industry through the "I Got Your Back" project.

Brother Luck is the chef/owner of Lucky Dumpling and Four By Brother Luck in Colorado Springs, Colorado. Learn more at fourbybrotherluck.com. 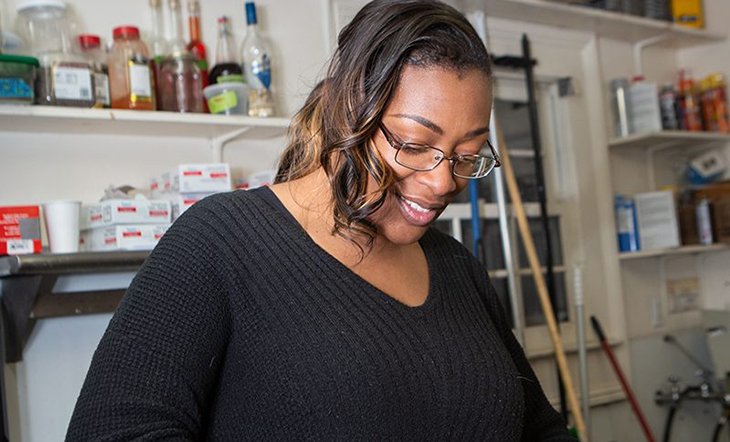