Why Investing in Staff is Good for Business

Below, Laurie Woolever explores the career of WEL alumna Christine Cikowski, from Chicago’s fine-dining kitchens to pop-up dinners to her current role as chef and co-owner of the lauded and pioneering Honey Butter Fried Chicken, where staff well-being comes first.

“Our business is doing very well,” says Christine Cikowski, chef and co-owner of Chicago’s Honey Butter Fried Chicken. “It’s not just because we have delicious fried chicken—although we do.”

They do indeed: Matt Kirouac of Serious Eats called it “some of the best fried chicken Chicago has ever seen, impossibly succulent and sheathed in a crispy golden-brown crust.” Readers of the Chicago Tribune and Chicago Magazine have named Honey Butter their choice for the city’s best fried chicken.

But good chicken isn’t everything, says Cikowski, an alum of the Beard Foundation’s Women’s Entrepreneurial Leadership program. “The people making it actually like coming to work. They feel taken care of, and invested in their work. They're making better food, giving better service. Our sales have gone up every single year.”

Since opening Honey Butter in 2013, Cikowski and co-owner Joshua Kulp have made it a priority to take care of their employees in ways that have long been thought impossible in the American restaurant industry. A few months into the life of the business, they began to offer health insurance for employees and dependents. Employees accrue paid sick leave and time off. All are entitled to staff meal twice daily, whether or not they’re working on a particular day. New parents can take paid family leave and are offered flexible scheduling to accommodate the demands of childcare. And, Cikowski and Kulp have instituted gainsharing, in which profit disbursement to employees is tied to the meeting of specified financial goals.

“There are two driving forces for doing the kind of work that we do, the most obvious being ethical. We can't run a business and not provide these things for the people who are working hard to make us successful.

“In the last few decades, chefs have become more interested in well-grown products, sustainable farming, and animal welfare. We’ve turned inward, and look to treat our staff members with the same care and attention,” says Cikowski, a Kendall College School of Culinary Arts alum who has worked in restaurants since the age of 16, including nearly two years at Chicago’s acclaimed Blackbird.

The other motivation for offering workers robust benefits is that “it’s actually good for your business, financially,” she says. “It just costs more up front. It's a long-term game. You don't see it on the day-to-day; you see it on the year.

“Benefits are super-expensive, but we decided to figure out how it could be done,” she says. By implementing a price increase on the food, negotiating a price decrease on raw materials, extending the operating hours, and redesigning the kitchen for greater efficiency, Cikowski and Kulp freed up the capital necessary to invest in their employees’ well-being. “If you can't afford to take care of your employees,” she asks, “what kind of business do you have?

Cikowski says the results are tangible: “People stay longer; they're more loyal. Last year we retained 70 percent of our employees, and our profits are at 12 percent. We’ve been recognized for having amazing service; everyone is so nice and friendly and helpful. Why is that? We're hiring good people, for sure, and when they feel taken care of, they do a better job.”

Cooks and servers at Honey Butter all earn fair hourly wages, with the business eschewing the traditional tipped service model that puts the onus on the notoriously fickle public.

“Let's be honest,” says Cikowski. “Not everybody leaves 20 percent on their check, even if they think they do. It's too often based on the color of people’s skin, what they look like, their age, their gender, whether they flirt with you or not. It’s profiling.”

Cikowski and Kulp met as culinary students, becoming friends through bonding over their shared interests in social justice issues and desire to put their beliefs in practice in the realm of hospitality. In 2004, spurred by a small but dynamic underground supper club movement documented in the New York Times, the two secured a catering license and began cooking for paying guests in Cikowski’s living room, under the guise of the Sunday Dinner Club.

“We just started doing it. There was no business plan, there was no investment. We bought a bunch of plates, folding tables and tablecloths, cleared out my living room and started doing dinners,” she says. They continue to operate the Club, though it’s since relocated to an event space. “It’s a chance for us to sharpen our skills and hone our craft as chefs, serving a seasonal five-course menu that changes a couple times a month.”

As for Honey Butter, Cikowski and Kulp are working on attracting investors for expansion strategy that will help them maintain the workplace culture they’ve established, and she’s using the skills and wisdom she acquired as a participant in the WEL program.

“Being surrounded by like-minded people, and being able to get that support and education, those tools for success, has really helped,” says Cikowski. “We want to make changes at the systemic level, as well as at the industry level. We do it for ourselves, and we do it for our employees.”

--
Laurie Woolever is a writer, editor, and co-host of the food-focused podcast Carbface for Radio. She lives in New York. 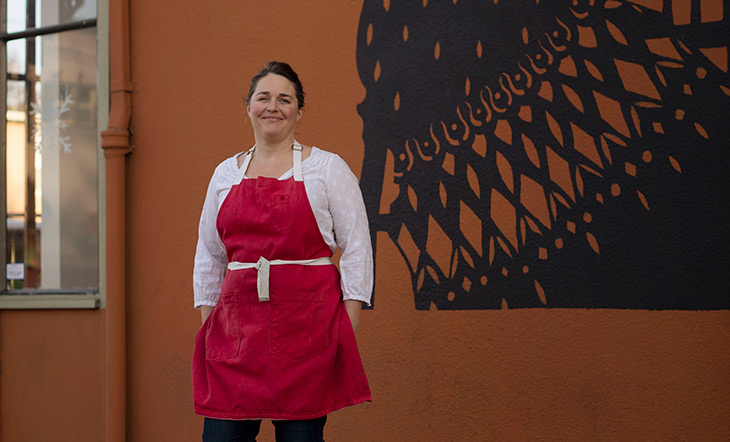 For This Chef, The Greatest Success is Finding Balance