Why You Should Get to Know Jamaican Food

Restaurants have to cater to a lot of different dietary restrictions these days, from gluten and nut allergies to moral, religious, or health preferences around meat and animal products. For chef Kwame Williams, however, this panoply of palates is not so different from the host of cultural influences that make up the Jamaican cuisine he was raised on. At his two restaurants in New Jersey, the JBF Chefs Boot Camp for Policy and Change alum focuses on creating dining experiences where everyone has a place at the table. We chatted with Williams about the inspiration behind his menus, his work around childhood nutrition, and how he plans to keep standing up and speaking out.

JBF: Tell us a little about Ital cuisine, and how this Jamaican/Rastafari philosophy informs the food you serve at Vital Dining.

Kwame Williams: Ital is derived from the word “vital," and espouses natural, pure, and clean living. In Jamaican and Rastafari culture, it's believed that one should eat food grown from the earth around them. The Ital lifestyle is a very strict, vegan, plant-based diet, which for some people even excludes salt. My original concept for Vital Dining was vegan, but my sisters, who are co-owners, fought me on it. I ended up falling in love with our opening menu, which was not vegan, but embodied more of the complexity of Jamaican culture and ideology beyond just Ital.

Jamaica’s national motto is “out of many people, one,” which refers to the melting pot of influences on its culture, from Spanish to Asian to British to African. That means that in every household you’re going to have a wide variety of dietary habits. It’s pretty common that in one family you’ll have a Rasta uncle who’s a strict vegan, a couple of pescatarians, a grandmother who eats pork, and maybe some cousins who eat beef. So at a typical holiday dinner there’s always a lot of different types of food that everyone can eat.

Nowadays in America, various dietary restrictions are becoming more prevalent, and I felt like it was important to create a space for people to eat where no one feels excluded. So the concept at Vital is true to Ital principles at its core, yet rather than exclude meat eaters, we instead strive to provide the freshest, purest product that is as close to nature as we can get with everything we serve.

JBF: Are there any traditional Ital dishes on the menu now?

KW: We don’t really serve traditional Ital dishes, but a lot of the vegan items on Vital’s menu are influenced by the lifestyle. For example, we looked at pepper pot, which is a traditional Ital dish of brothy green soup that uses callaloo, a type of mustard green. At Vital, we take callaloo and use it to make a dip.

Our callaloo dip is vegan and has the consistency of spinach–artichoke dip, which makes it more appealing for the diners who are less familiar with Jamaican food. The flavors are slightly different, since we’re not using spinach, and instead of cream and cheese, we’re using coconut milk, which is a nod to Jamaican cuisine.

JBF: You’ve done a lot of work, both when you were cooking in New York City, and now out in New Jersey, on childhood nutrition. How did you become interested in the issue?

KW: As a father of three, childhood nutrition is a subject that has been on my mind for some time. A few years ago, I began to be a little more health-conscious and became really interested in understanding how everything is grown and how animals are raised, which made me want to get my children to eat more vegetables.

I did a little bit of work with Edible Schoolyards when I was working as a chef in Harlem, but since I opened my restaurant in Montclair, I’ve been working more with local New Jersey programs. I’ve done a number of events with Montclair Community Farms, where I’m either speaking to students or just going out with them and helping them plant and garden.

For one of those classes I work with seventh graders, and a part of their responsibility is to maintain the garden. The organization reached out to me because they had a surplus from the garden, and they didn’t have anything to do with all this produce the children had grown. At first, I took that surplus and it became the soup of the day at Vital. Now we sell a smoothie at the restaurant, and one dollar from each purchase goes to that garden program. They’ve since bought a truck and are doing a mobile farmers’ market, stocked in part with the vegetables the children are growing. The mobile farmers’ markets travel to the elderly living complexes around town, and provides the residents with easy access to fresh produce. It’s an amazing program that’s reaching people at both ends.

JBF: What is one thing that a family can do to improve the quality of the food their children are eating?

KW: Get them involved in the growing and/or the cooking of the food. The more involved a child is, the more open they are to trying new things. The more pride they can take in every meal, the more meaningful a good meal becomes to them.

JBF: Since you attended the Chefs Boot Camp in March has there been anything advocacy-related that you have felt particularly excited about or proud of?

KW: I feel like I’ve just scratched the surface. Coming out of Boot Camp, it was a little bit overwhelming. I felt like I wasn’t doing enough. Now, a few months later, I’m becoming more active and really starting to focus on different areas like children nutrition, food waste, and more. I’m actually working on a documentary on African-American chefs and what opportunities are available to them in the restaurant industry. Another thing coming up is that I’m supposed to be speaking at the United Nations on July 14. When I first got the email, it seemed really daunting, like, I’m playing with the big boys now! There’s a group that is presenting different perspectives on land acquisitions, climate change, and the impacts on each country’s agriculture and overall health, and they’ve asked me to speak on behalf of Jamaica.

Beyond these individual efforts, my ultimate goals are to be a pillar in whatever community I may have a restaurant in, to have my businesses be shining examples of ethical restaurants, and to use my voice to spread that message nationwide.

Get a taste of Kwame’s cooking with his recipe for Callaloo Dip.

Learn more about the JBF Chefs Boot Camp for Policy and Change. 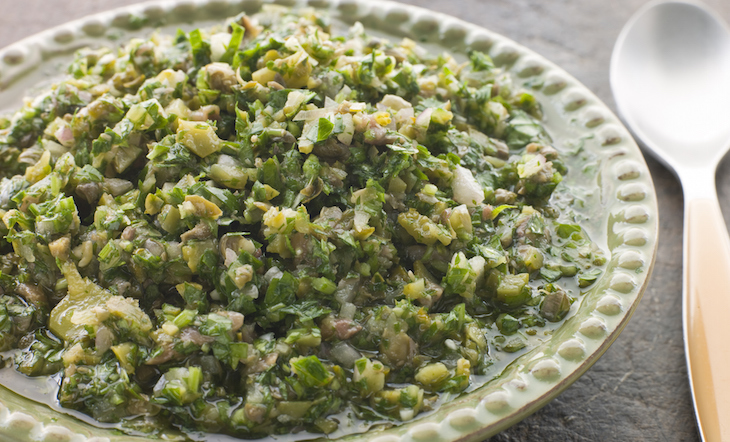 How to Make Your Salsa Verde Greener Than Ever