A Mexico City native with six successful restaurants in the United States, Richard Sandoval knows how to throw a Cinco de Mayo event. His dinner at the Beard House included rock shrimp ceviche, roasted pork with pumpkin seed sauce, and this delicious red snapper. Whatever you do, don't let the length of the ingredient list dissuade you from making this dish—it's fantastic.

To make the adobo, remove the stems, seeds, and membranes from the chiles. Break into large pieces and set aside.

In a medium saucepan or skillet, heat the oil over medium-high heat. Add the onion, garlic, cinnamon, cloves, peppercorns, and cumin seeds. Cook, stirring occasionally, until the onion is soft and dark golden brown, about six minutes. Add the chiles and cook until darkened on both sides, about 1 minute.

Add 1 1/2 cup of water—it should cover the ingredients about halfway. Gently boil until the liquid has reduced by half, 5 to 8 minutes. Scrape into a blender and purée. Pour into a medium-mesh sieve, set over a bowl, and press the solids with a rubber spatula or the back of a ladle to release their liquid. Discard the solids. You should have about 1⁄2 cup liquid.

To prepare the snapper, season the fish with salt and pepper. In a small bowl, stir together the adobo and mayonnaise. Place the fish in a baking dish and coat with the adobo mixture. Cover the dish with plastic wrap and refrigerate for two hours.

While the fish is marinating, make the chipotle rouille. In a blender, process the chiles and oil until puréed. Using an electric mixer with a whisk attachment or whisking by hand, beat the egg yolks in a medium bowl until thick and lemon-colored. Drop by drop, whisk in the oil mixture. Don't rush, or the oil may separate from the yolks. Once the mixture begins to thicken, slowly add the oil in a thin, steady stream, stopping frequently to make sure the oil is being absorbed. Season with the lemon juice, salt, pepper, and honey to taste.

To prepare the coleslaw, toss together the cabbages, cilantro, lemon juice, salt, and pepper in a large bowl. Stir in 1/3 cup of the chipotle rouille, making sure the slaw is evenly moistened. Add honey to taste and stir to blend. Can be made up to several hours ahead of time; keep covered in the refrigerator.

To finish the snapper, preheat oven to 350°. In a large, ovenproof skillet, heat one tablespoon of the oil. Add the fish and sear on both sides until lightly browned, 4 to 5 minutes total. Slide the skillet into the oven and bake until cooked through and the fish flakes when prodded with a fork, another 4 to 5 minutes.

In a large skillet, heat the remaining tablespoon of oil. Add the tortilla halves and gently heat through, 1 to 2 minutes. To serve, place a tortilla in the center of each of four dinner plates. Spoon a quarter of the coleslaw onto each tortilla, and top with a piece of red snapper. 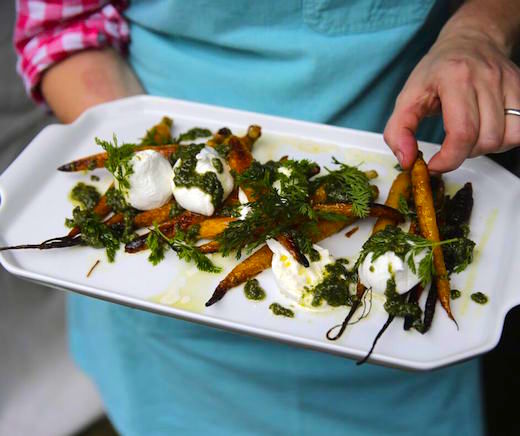 The Best Recipe to Make the Most of Summer Corn