This is a rustic bread salad with a lot of rough edges, so try to find a mature and hearty arugula as opposed to the baby variety. It’s often sold in bunches and the leaves are slightly waxier. If you’re lucky enough to find arugula that’s sprouting in the spring, use that, as it’s very spicy and intense, and a perfect foil to the rhubarb." -- JBF Award Winner Naomi Pomeroy

Make the pickled rhubarb: cut a 1-foot square of cheesecloth and fold it over once. Place the coriander seeds, fennel seeds, and black peppercorns on the cloth; gently roll it lengthwise into a small sachet, and tie both ends with kitchen twine (like a wrapped candy).

In a nonreactive saucepan, combine the vinegar, water, lemon peel, bay leaves, salt, and the spice sachet and bring to a boil over high heat. Turn down the heat to medium-low and simmer for 5 minutes, then add the sugar. Return the mixture to a full rolling boil, stirring to dissolve the sugar. Add the rhubarb and cook for 30 seconds, until the mixture is close to simmering again and small bubbles are forming.

Place the rhubarb and the pickling liquid in a heatproof glass or ceramic bowl, making sure the rhubarb is fully submerged (if necessary, top it with a piece of parchment paper and a heavy plate to keep it submerged). Let the rhubarb cool to room temperature (about 1 hour), then refrigerate it, covered, for up to 2 weeks. Remove the rhubarb from the pickling liquid with a slotted spoon as needed; reserve the liquid for future pickling projects or use it in another vinaigrette.

Make the toasted bread: preheat the oven to 325°F. Line a baking sheet with parchment paper. Cut the crust off the bread and tear the loaf into rustic 1-inch pieces. They don’t have to be uniform. In a small saucepan, warm the butter, oil, salt, and pepper over medium-low heat until the butter is melted. Put the bread in a mixing bowl and drizzle the butter–oil mixture over it. Toss the bread until it absorbs all of the fat; it will be more or less soaked through with butter and oil. Spread the bread across the prepared baking sheet.

Bake the bread pieces, stirring every 2 to 3 minutes, until golden brown on the outside but still slightly soft on the inside when pressed, 5 to 8 minutes. Allow the bread to cool for about 10 minutes while you assemble the rest of the ingredients.

Make the vinaigrette: place the shallots in a mixing bowl, cover it with the vinegars, add the salt and pepper, and whisk lightly. Let the mixture sit for about 10 minutes to soften the sharp bite of the raw shallots, then slowly drizzle in the oil while whisking.

Make the salad: snap off the tough ends of the asparagus by bending each stalk until the asparagus naturally breaks. Cut each stalk on a very sharp bias into pieces about the thickness of a quarter.

Wash and dry the arugula.

In a large mixing bowl or serving bowl, combine the toasted bread and the asparagus, add 1⁄4 cup of the vinaigrette and toss until combined. Let it sit for 4 to 5 minutes so the bread and asparagus soften slightly. Add the rhubarb and the cheese to the bread and asparagus mixture, followed by the mint, parsley, finishing salt, and pepper. Toss to combine. Add the arugula, along with 1 to 2 more tablespoons of the vinaigrette to taste, and toss gently. Serve immediately. 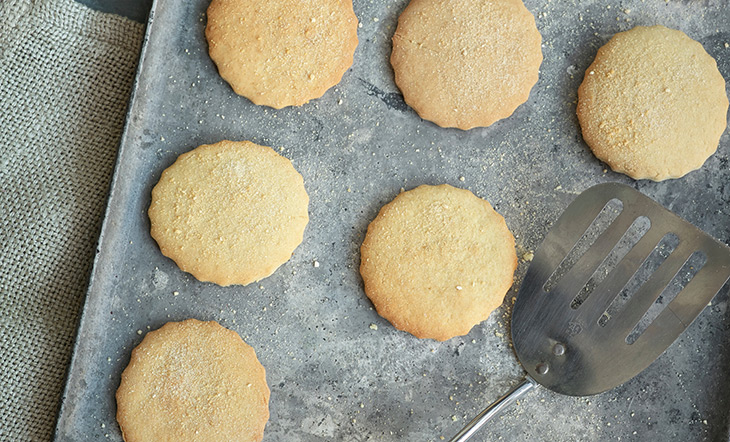