You’ve probably had a salad with these flavors before. It was likely kale, with croutons and Parmesan as sporadic garnishes. But if you change the coarseness of the bread and add a lot more of it, throw in a bunch more Parmesan, and swap kale for silkier Swiss chard ribbons and its finely chopped stems, you have a salad with textures and flavors that keep your attention for more than two bites. Merrill recreated this salad after having it at a favorite Brooklyn restaurant, Stone Park Cafe. She chops the stems so finely that their raw crunch is pleasing, and the chard ribbons loop around each other like noodles, picking up the heaps of Parmesan and garlicky breadcrumbs with the help of a lemon dressing. Toasted almonds and torn bresaola make it a meal, but so would pistachios, pumpkin seeds, or walnuts; prosciutto, salami, or mortadella; rainbow chard or, sure, lacinato kale instead of (or alongside) the Swiss chard.

Juice and zest the lemon. In a small bowl, combine 2 1⁄2 tablespoons of the lemon juice, 1 teaspoon of the lemon zest, and a few generous pinches of salt. Slowly whisk in 1⁄4 cup of the olive oil.

In a small, heavy skillet, heat the remaining 1⁄4 cup of olive oil over medium heat. Add the breadcrumbs and cook, stirring frequently, until crisp and golden brown, about 5 minutes. Be careful not to burn them! Stir in the garlic and let the breadcrumbs toast for a minute more, then remove from the heat.

Separate the chard leaves from their stems and finely chop the stems. Stack a few of the leaves on top of each other, roll them like a cigar, and cut crosswise into 1⁄8-inch ribbons. Repeat until all the leaves are shredded. Put the chard stems and leaves into a large bowl and toss gently with the Parmesan and about two-thirds of the lemon dressing. Taste and add more dressing if you like. Toss in the bresaola, almonds, and toasted breadcrumbs and serve immediately.

Reprinted with permission from Food52 Mighty Salads: 60 New Ways to Turn Salad Into Dinner by the editors of Food52, copyright © 2017. Published by Ten Speed Press, an imprint of Penguin Random House LLC.

Rigatoni with Sausage and Fennel 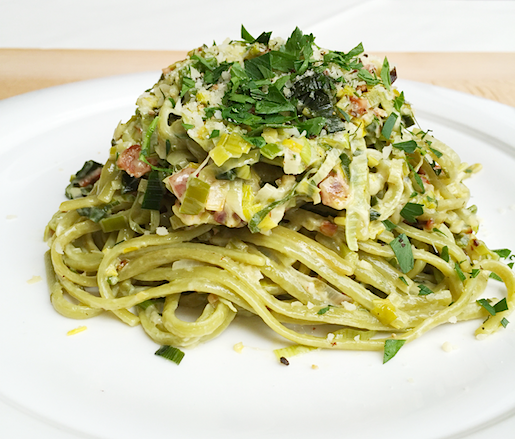