Lee Anne Wong calls these offal-based bites the “MVP in my dumpling arsenal.” She credits the chicken livers, an often underrated organ meat, as the key to keeping these dumplings moist and juicy, no matter how you cook them—boiled, steamed, panfried, or deep-fried—these doughy morsels come out deliciously. Wong says they’re a crowd-pleaser at parties, but try using this recipe in response to your next takeout craving.

Make the soy–ginger dipping sauce: in a small bowl, mix together all the ingredients until the sugar dissolves. Refrigerate and allow the ginger to macerate for at least 1 hour.

Make the filling: in a large mixing bowl, combine the ground chicken, garlic chives, Shaoxing, soy sauce, ginger, sugar, salt, and white pepper. Pulse the chicken livers in a food processor until chopped small, or chop by hand. Combine the livers with the rest of the ingredients until the filling is well combined.

Place 1 tablespoon of filling on each dumpling wrapper. Brush the edge of the dough with water and then immediately fold the circle in half and pinch all the way around to seal the dumpling. Alternatively, pinch opposite points from each quarter of the circle together at the top of the dumpling to form a four-pointed dumpling.

Steamed: steam the dumplings on a piece of greased parchment paper set over a boiling water bath until the filling and dumpling skins are cooked through, about 6 to 8 minutes.

Panfried: in a liquid measuring cup, mix 2 cups of water and 2 tablespoons of flour until the flour has dissolved into the water and the mixture is cloudy. Heat a small nonstick pan over medium-high heat. Add 1 tablespoon vegetable oil to the pan and place the dumplings in the pan, lined up next to each other. Cook until the bottoms of the dumplings turn golden brown, about 1 to 2 minutes. Add 1/2 cup of the flour-water mix to the pan; it will react with the hot pan and steam and splatter a bit, so be ready with a tight-fitting lid. As soon as you add the flour-water mixture, cover the pan with the lid. Cook the dumplings, covered, until almost all of the water has evaporated and a thin golden crust begins to form in the bottom of the pan, about 3 minutes. Remove the lid and cook until all the water has evaporated, about 3 more minutes. Carefully remove the dumplings from the pan and serve immediately. Wash the pan and repeat with remaining dumplings and flour-water mixture. Be sure to keep stirring the flour and water slurry periodically since the flour will sink.

Deep-fried: preheat a large pot of canola or vegetable oil to 350°F. Carefully drop the dumplings one by one into the hot oil, frying in small batches and making sure not to overcrowd the pot. Cook the dumplings for 3 minutes, until the exterior is golden brown. Drain on a paper towel-lined plate. Repeat with remaining dumplings until all are cooked, making sure the oil temperature returns to 350°F before frying the next batch.

Scatter the cooked dumplings with the chopped scallions and serve immediately with the soy-ginger dipping sauce on the side.

From Waste Not: How to Get the Most from Your Food by The James Beard Foundation/Rizzoli Publishing. 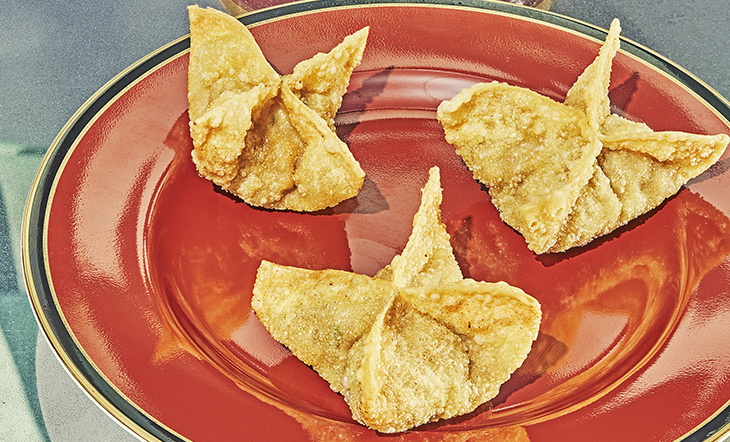 These Dumplings Bring New Life to the Chicken Liver