“I’m going to give you my family recipe for Oregon clam chowder, which I think is damn good. It is easy to do and can be made, if necessity bids, with canned razor clams. While this is not the traditional New England clam chowder, it is awfully good.” — James Beard

Creamy New England-style chowder was the first soup James Beard ever ate, and he referred to it as his “oldest love." It can be made with Pacific Coast razor clams, the more common East Coast littlenecks, or, in a pinch, with a can of minced clams

Thoroughly clean clams with a brush and discard any clams that do not close. Place in a large bowl and cover with cool water. Set aside in the refrigerator for about 30 minutes. Gently lift clams out of the water, leaving sand behind.

Bring a large pot filled halfway with water to a boil, then reduce to medium heat, add clams, and steam until shells open, about 10 minutes. Discard any clams that do not open. When cool enough to handle, remove clam meat and roughly chop; set aside.

In a medium skillet over medium heat, render salt pork or bacon and fry until golden brown and crisp, 7 to 10 minutes. Transfer the bacon with a slotted spoon to a plate, reserving the bacon grease. Add chopped onion and thyme, sauté until translucent and lightly browned, about 5 minutes.

Meanwhile, in a large pot, add the potatoes and 2 cups cold water. Bring to a boil and season with salt. Simmer until potatoes are slightly tender, about 5 minutes. Stir in the bacon, onions, and salt and pepper to taste; simmer 5 minutes. Add the cream, bring to a boil, and reduce heat to simmer. Correct seasoning, add chopped clams, and just heat through. Remove thyme stems and stir in butter. 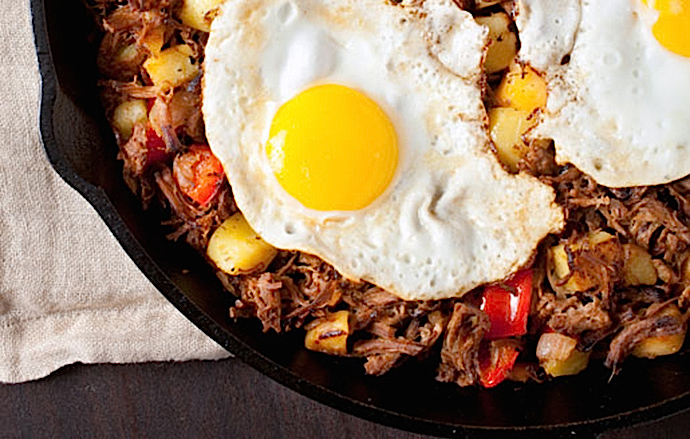