"Please be careful how you source your veal—there is still rampant mistreatment of animals in the veal industry. In fact, while the ideal is to avoid 'industry' whenever you’re selecting food, when selecting veal it is essential. Get to know a small dairy farmer who pastures calves with their mothers, and you’ll have the good stuff: it will be pink, nowhere near the anemic whitish color of industrial veal. If you have any small dairy farms and meat lockers in your area, it’s worthwhile to seek out local pastured veal—it will almost always be tastiest in early summer when the calf’s mother is dining on the lushest pasture of the year, and the calf is munching a little of the fresh green grass as well in addition to his mother’s milk. If you can’t find pastured veal, you can substitute grass-fed round or sirloin steak." – Paul Fehribach

Adapted from The Big Jones Cookbook (University of Chicago Press, 2015)

Place the bread crumbs in one pie pan, the flour in another, and the eggs and water in a third pie pan, mixing the eggs and water together well. Loosely wrap one of the veal cutlets in plastic, with the muscular grain vertical, and pound it out with a mallet until it’s an even 1/2-inch thick. Unwrap the cutlet and repeat with the other three pieces. Season the cutlets liberally with salt and pepper on each side, then one at a time, dip the cutlets first in the flour, then dip both sides in the egg mixture, and then dip in the bread crumbs to coat both sides. Repeat until all the cutlets are well-breaded, gently brushing them with your fingers to smooth out any lumps of breading.

Fill a cast-iron skillet with the lard or vegetable oil until it is 3/4-inch deep. Heat the lard or oil  over medium-high heat until it is hot but not smoking, and reaches 325°F on a clip-on thermometer. Without overcrowding the skillet (you can fry in more than one batch), add the cutlets to the hot fat and fry them, reducing the heat to medium, for 3 to 4 minutes, until they are well-browned and golden on the first side. Then gently flip the cutlets with long-handled tongs and cook them on the second side for another 2 to 3 minutes until browned.

Transfer the fried cutlet to a wire rack or paper towels to drain while finishing the rest of the cutlets. Once all the cutlets are fried, keep any bits of breading that have browned in the pan and reserve a couple of tablespoons of the fat. Drain off and discard the leftover fat.

Continuing over medium heat, add the onions to the skillet and sauté them for 6 to 8 minutes, stirring often with a wooden spoon, until they are softened and just beginning to brown. Add the mushrooms and sauté so they sweat and release their aroma. When the smell of mushrooms rises, add the sherry, stock, and Worcestershire and increase the heat to high. Reduce the liquid until it is thick and syrupy, with the onions and mushrooms well-coated. Add the cream and lemon juice, and bring the mixture to a boil. Reduce it for another minute or 2 just until it seizes into the consistency of a light gravy. Season the sauce with salt to taste and serve at once over the fried steaks.

Chicken with 40 Cloves of Garlic 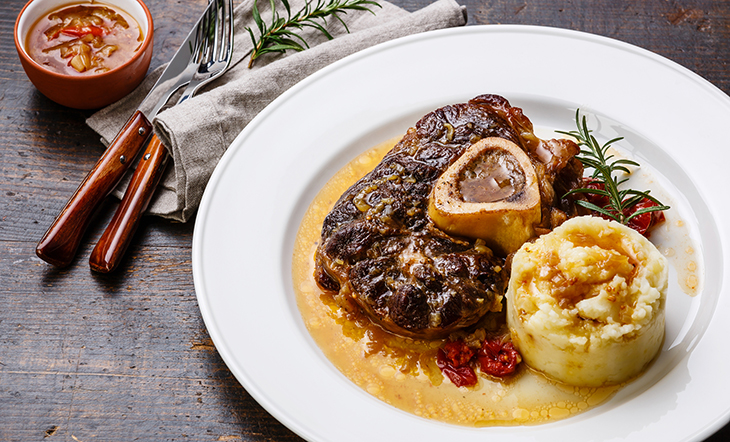