“I created this for Gramercy Tavern’s cocktail menu in 2005. At that time, pioneering distillers such as Lance Winters at St. George and Marko Karakasevic at Charbay were gaining national attention for their naturally flavored vodkas, and greenmarket-driven bars and restaurants such as Gramercy Tavern were their early champions. Lance chose unusual varieties of fruit to flavor his Hangar 1 vodkas, such as makrut lime, mandarin blossoms, and Buddha’s Hand, and I loved the challenge of mixing with them for unsuspecting audiences who weren’t used to vodka with character. The marzipan notes in an aromatic Lebanese orgeat, which I sourced from a local specialty store called Kalyustan’s, tamed the perfumed Buddha’s Hand vodka, while the mint added a pleasing herbal dimension. The recipe is a simple twist on the classic Southside Fizz (which appears in The Artistry of Mixing Drinks); I named it in honor of the three parks in the neighborhood (Madison Park to the north, Gramercy Park to the east, and Union Square to the south).

Hangar 1 was acquired and reformulated, and bartenders such as San Francisco’s Jen Colliau have gotten into the syrup-making business, which means high-quality orgeat made from blanched almonds is the new gold standard. The DSP CA 162 vodka is the closest thing I’ve found to the original formula of Hangar 1 Buddha’s Hand.” —James Beard Award winner Jim Meehan

Muddle the mint and orgeat, then add the vodka and lemon juice. Shake with ice, then fine-strain into a chilled rocks glass filled with ice cubes. Top with the club soda. Garnish with the mint sprig. 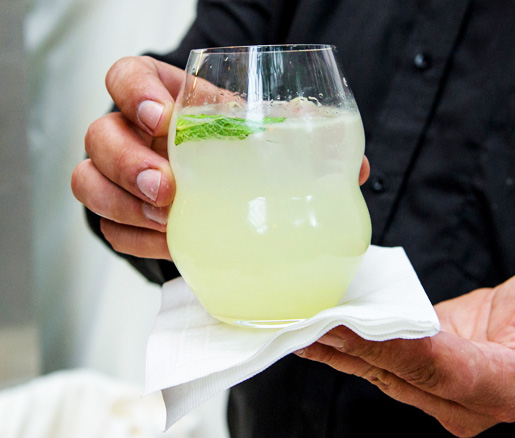 Charting a Path to a More Equitable and Sustainable Food Industry