“This is a play on the classic Jewish deli pastrami sandwich, without the bread. It’s heavy on the spice, and leans toward a Quebecois-style smoked meat, like Montreal’s famous Schwartz’s. At the deli, I usually order the medium because it’s the best blend of lean and fat meats, just like the difference between the tip of the tongue and the back end, as in this dish. This recipe makes a lot of leftover tongue, but it can live in the fridge for a week and also freezes well.” —Chris Cosentino in his 2018 Beard Award–nominated Offal Good

NOTE: You can get sprouted grains at most health food stores, Whole Foods, and many markets. If you’d like to experiment with sprouting them yourself, place grains such as rye berries on a moist towel and cover with another moist towel, then let it sit in a warm area. Spritz with water every other day until the berries sprout, which should take 2 to 4 days. Let them grow as big as you’d like before using, but watch out for molding or rot. Be sure to keep them damp, not soaking wet.

Make the tongue brine: combine all the ingredients except the curing salt and beef tongue with 1 gallon of water. Bring the mixture to a boil, then chill until cold; add the curing salt to the pot and mix until dissolved. Refrigerate the brine until ready to use. Combine the tongue and the brine, cover, and refrigerate for 4 days.

Make the pickled onions: place all the ingredients except the onions in a medium nonreactive saucepan. Bring the mixture to a boil, then turn off the heat and let it infuse for 30 minutes. Place the sliced onions in a heat-proof bowl. Strain and pour the hot liquid over the onions. Let the onions sit covered in the fridge overnight before use.

Make the pastrami spice: burn the cinnamon sticks on an open flame to char them, bringing out their natural oils. Crush all the spices in a mortar and pestle until coarse, then mix them together. Alternatively, you can use a spice grinder, but pound the cinnamon in a mortar and pestle; that should be a more medium-coarse grind. Store in an airtight container at room temperature for up to two weeks.

Remove the tongue from the brine and place it with the celery, carrot, onion, garlic, leek, fennel, bay leaves, and thyme in a pot with fresh water to cover. Bring the water to a simmer, and cook until the tongue is tender and the skin separates from the meat when squeezed, 2 1/2 to 3 hours (but start checking after 1 1/2 hours, as tongues vary). Peel off the tough skin from the tongue and roll the tongue in 1/2 cup of the pastrami spice, pressing the spices in. Let cool.

Set up a cold smoker. Smoke the tongue for 45 minutes. Wrap the tongue tightly in plastic wrap, set it in a pan, and return it to the fridge. This allows the meat to fully absorb the smoke; otherwise, it gets sucked out by the air in the fridge.

Make the mustard vinaigrette: in a mixing bowl, combine the Champagne vinegar and the mustards. Whisk in the olive oil, and season with salt and pepper. Store in the refrigerator until ready to use. It can keep for a month.

To serve, slice the tongue with a sharp knife or on a meat slicer across the grain, thin like a slice of ham you’d find in a tall deli sandwich. For 4 servings, shave about a third of the tongue, reserving the rest for another use.

Place the tongue slices in a mixing bowl with the lettuce, 1/4 cup pickled onions, chives, and sprouted rye berries. Dress the salad with 1/4 cup of vinaigrette, evenly coating it, then plate. For an extra little flavor boost, dust the top of the salad with some toasted pastrami spice. 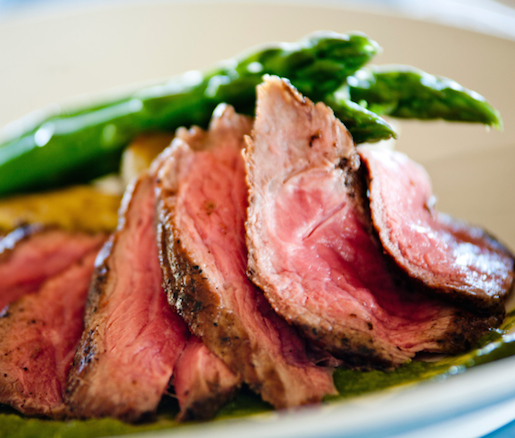