Adored by bartenders for the extra depth and dimension they bring to cocktails, bitters can do double duty in the kitchen. Here, Marc Forgione combines almonds and Agnostura bitters in a nutty, aromatic ice cream, which he serves with pears that have been poached in wine.

To make the ice cream, preheat the oven to 350ºF. Spread out the almonds on a baking sheet. Toast in the oven for 12 minutes, until golden and fragrant.

Place the milk and heavy cream in a medium sauce pot. Add the toasted almonds to the pot. Bring just to a boil, then remove from the heat. Cover and let sit for 1 hour.

In a large mixing bowl, whisk together the egg yolks, honey, sugar, and cornstarch. Return the steeped milk mixture to the stovetop and heat over a medium-high flame. When it just comes to a boil, remove from the heat and slowly add about half of it to the egg mixture, whisking constantly. Pour the contents of the bowl back into the pot while whisking. Continuing to whisk constantly, cook the mixture over medium heat until it’s thick enough to coat the back of a spoon, about 5 minutes. Remove from the heat and strain through a fine-mesh strainer. Stir in the bitters. Chill overnight. Process the custard in an ice cream machine according to the manufacturer’s instructions. Freeze until needed.

To make the pears, place the sugar and 1/4 cup water in a large pot, stirring until the mixture resembles wet sand. If there’s any sugar on the sides of the pot, remove it by either brushing it with hot water or wiping it with a towel. Cook over high heat, swirling the pan but not stirring, until the mixture becomes a light, golden brown caramel, about 7 minutes. Remove from the heat and add the remaining water, wine, orange juice, orange zest, star anise, and cinnamon sticks. Bring the mixture just to a boil again, then reduce to a gentle simmer. Add the pears and cover with a circle of parchment paper. Cover and lightly simmer the pears for 2 1/2 hours, or until they’re tender. Remove from the heat. Using a pair of tongs, take the pears out of the liquid. Set aside on a plate or in a baking dish.

To make the caramel, combine the sugar and water in a small pot, stirring until the mixture resembles wet sand. If there’s any sugar on the sides of the pot, remove it by either brushing it with hot water or wiping it with a towel. Cook over medium heat, swirling the pan but not stirring, until the mixture becomes an amber caramel color, about 5 minutes. Remove from the heat; add the pear juice and cream and combine well. Bring the caramel to a boil. Remove from the heat and reserve.

To serve, quickly reheat the pears in the microwave or oven. Place a scoop of ice cream in a bowl. Place a warm pear half over the ice cream. Finish with some warm caramel sauce. 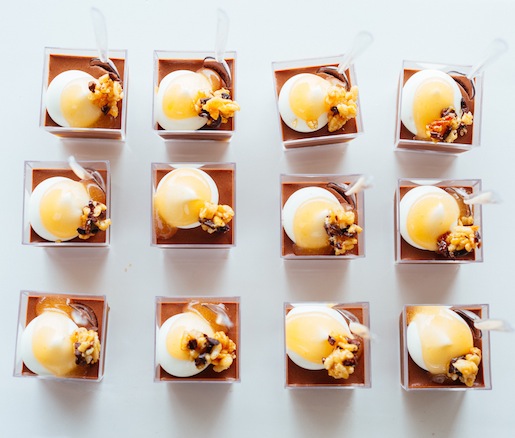