What began as an experiment in chef Husbands’s kitchen went on to be a huge hit among his customers in Boston. For maximum flavor, let the popcorn steep in the custard overnight.

Place the popcorn kernels and oil in a 2-quart saucepan over medium-high heat. Holding the pan by the handle, quickly shake it back and forth over the burner. When the first kernel pops (after 1 to 3 minutes), cover the pan and continue to shake it while more kernels pop. When the popping slows to 1 to 2 pops every 10 seconds, remove the pan from the heat and transfer the popcorn to a bowl. Measure out 4 cups of popcorn and reserve. Save the extra popcorn for garnish.

In a heavy-bottomed saucepan over medium heat, warm the half-and-half, heavy cream, and vanilla bean until you see small bubbles forming around the edges of the pan. (Do not let the mixture reach a boil, or the half-and-half will curdle.) Remove from the heat and set aside.

In the bowl of an electric mixer fitted with the paddle attachment, beat the egg yolks and sugar on medium speed until the mixture is thick and light in color, 2 to 3 minutes. Keeping the mixer on medium, gradually add about half of the hot cream mixture to the egg yolks, mixing until smooth. Pour the contents of the mixer bowl into the remaining cream in the saucepan; mix well.

Place the pan over medium-low heat and cook, stirring constantly, until the mixture registers at 180°F on an instant-read thermometer, about 10 minutes. It should be thick enough to coat the back of a spoon. Remove the pan from the heat and discard the vanilla bean. Pour the custard into a large metal bowl and stir in the 4 cups of popcorn. Cover and refrigerate for 12 to 24 hours.

Strain the popcorn custard through a fine-mesh sieve into a bowl, pressing down on the popcorn to squeeze out as much liquid as possible. Churn in an ice cream maker according to the manufacturer’s instructions. When the ice cream is almost frozen, add the sea salt and churn to fully incorporate.

Garnish servings of ice cream with the reserved extra popcorn. 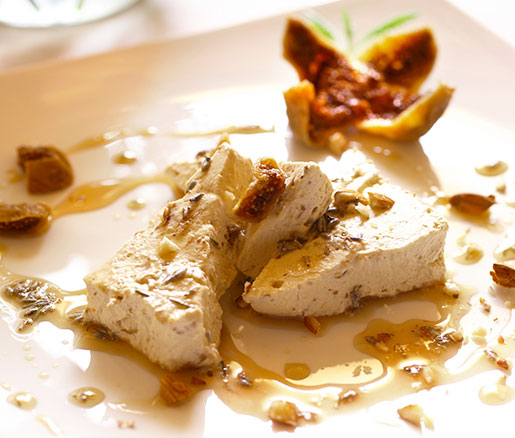