Neal Langermann created this dish as a Low Country take on a Chinese sweet-and-sour preparation. He loves the way the sugar and sweet spices act as a foil to the spiciness of the Szechuan pepper. When he served this dish at the Beard House, it received raves; it was a big hit with the recipe tester’s friends, too. Langermann serves the succotash in hollowed-out Vidalia onions, which he tops with a savory biscuit crust and bakes in the oven. We’ve simplified the presentation.

To brine the pork, combine all of the ingredients for the brine in deep bowl. Trim the pork tenderloin of all silverskin and place in the bowl. Cover and refrigerate for 12 hours.

Meanwhile, to make the redeye gravy, combine the ham and the bacon in a large saucepan set over high heat. Cook until all of the fat has rendered from the bacon, and the bacon is slightly crisp. Add the demi-glace, coffee, and Coca-Cola and cook until the mixture is reduced by two-thirds, about 1 1/2 hours. The mixture may not thicken, depending on the strength of the demi-glace used. If the gravy is too thin, dissolve the cornstarch in 4 tablespoons of cold water, and add it to the gravy. Bring to a boil and cook until the gravy thickens, about 2 minutes. Season with salt and pepper.

To make the succotash, reduce the cream to one cup over medium heat, which will take about an hour. Set aside. Melt the butter in a large sauté pan set over medium heat. Add the shallots, scallions, and tomato, and cook until softened, about 4 minutes. Add the black-eyed peas and the corn, and stir to combine. Add the reduced cream, stir to combine, and cook until the mixture is hot.

To finish the pork, combine the brown sugar, cinnamon, star anise, Szechuan peppercorns, salt, and pepper in a spice or coffee grinder and process until ground to a powder. Preheat the oven to 350ºF. Remove the pork from the brine and pat dry. Coat the pork with the spice mixture, pressing it on to form an even crust. Heat the olive oil in an oven-proof pan and sear the pork on all sides. Place the pan in the oven and roast for about 20 minutes, or until the pork has reached the desired doneness.

To serve, carve the pork into 1/2-inch-thick slices. Serve the meat with succotash and gravy.

Spaghetti with Crab and Zucchini 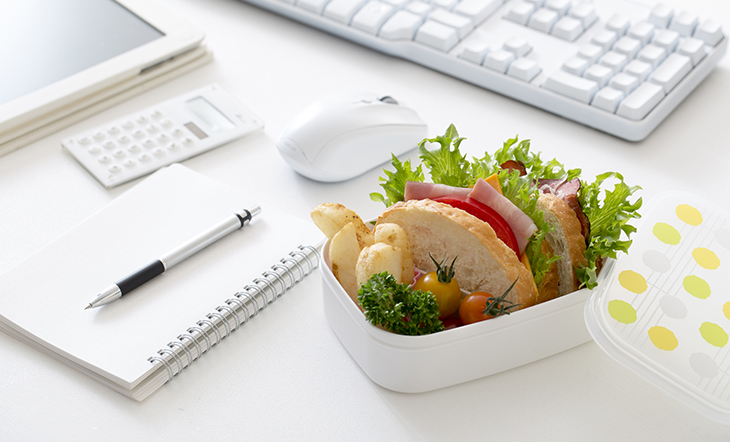 How to Avoid a Sad Desk Lunch