Because sweet potatoes do not brown after they are peeled, the latke mixture can be kept for about a day after it is made before the latkes are fried. Note that although sweet potatoes require roughly the same amount of cooking time as regular potatoes, their higher sugar content gives them a tendency to burn more quickly. Keep your eye on them while they brown and lower the heat if necessary.

Using the medium shredding blade of a food processor, shred the potatoes, laying them lengthwise in the feed tube to maximize the length of strands. Grate the onion on top of the sweet potatoes. Pick out any ungrated pieces of onion or sweet potato. Lay a clean dishtowel inside a large bowl and transfer the grated mixture to the towel. Roll the towel lengthwise and wring out as much liquid as possible. Discard the liquid and return the shredded mixture to the bowl. Add the eggs, matzoh meal, salt, mace, and pepper, and mix well.

In a large cast-iron of nonstick skillet, heat about 1/8 inch of oil over high heat. The oil is hot enough when a piece of potato sizzles when added. Form a trial latke with a tablespoon of the mixture. Fry until golden brown on both sides. Taste and adjust the seasoning with more salt and pepper if necessary.

To form the latkes, scoop up about 1/3 cup of the mixture with your hands and loosely pat it into a pancake about 1/2-inch thick, squeezing out any excess liquid. Slip the latke into the hot oil and flatten gently with the back of a spatula. Fry until deep golden brown, about 10 minutes on each side to be sure the center is fully cooked. If the edges darken very quickly, lower the heat. To prevent excess oil absorption, flip each latke only once. Add oil between batches as needed, making sure the oil heats up again before adding more latkes to the pan. Drain the latkes on paper towels or a clean paper bag. Serve immediately. 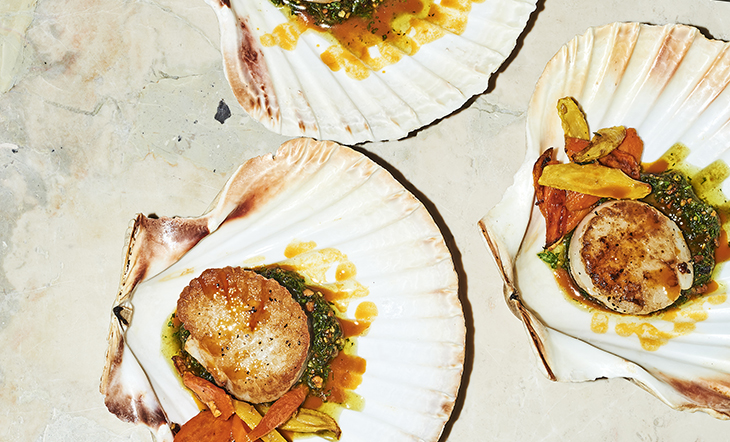