"Brother Victor-Antoine kindly shared another classic recipe from the south of France—this one is for a tasty omelet that is made with Swiss chard. Trucchia is typically flat and thin and can be cut into 2 or more portions. Brother Victor says he usually serves the amount given here for 2 even portions, though he says the French sometimes cut it into smaller slices that are served as hors d'oeuvres." –Madeline Scher

Bring a medium pot of salted water to a boil and blanch the chard until tender, 2 to 3 minutes. Drain thoroughly. When cool, grab a handful or two at a time, and squeeze the water from the chard; set aside.

Beat the eggs in a large bowl. Add the chard, season with salt and pepper, and mix well.

Heat the garlic in the olive oil in a 10-inch nonstick skillet over medium-high heat until the garlic is just starting to color. Remove the garlic and discard.

Add the egg and Swiss chard mixture to the skillet. Tilt the skillet in every direction so the mixture spreads evenly. Reduce the heat to medium-low, cover the skillet, and cook for 2 to 3 minutes, until the omelet is set up but the top is still moist.

Run a rubber spatula around the edge and bottom of the omelet to loosen it from the skillet. Shake the skillet to make sure no part is sticking. Wearing an oven mitt or using a towel to protect your hand and arm not holding the pan, place a large inverted plate over the omelet in the skillet. Quickly flip the skillet over so the omelet is on the right side of the plate. Return the pan to the heat and slide the omelet, browned side up, back into the pan. Continue cooking for a minute or two more until the omelet is done. Transfer the omelet to a serving plate and serve hot. 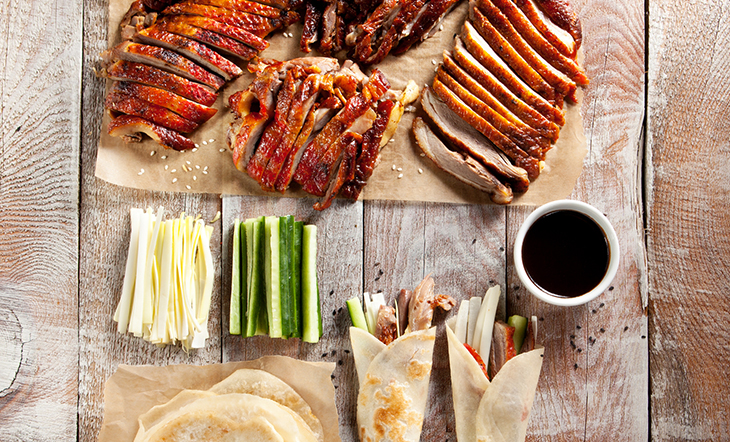 On the Menu: Tea-Smoked Duck with Mushroom Pancakes