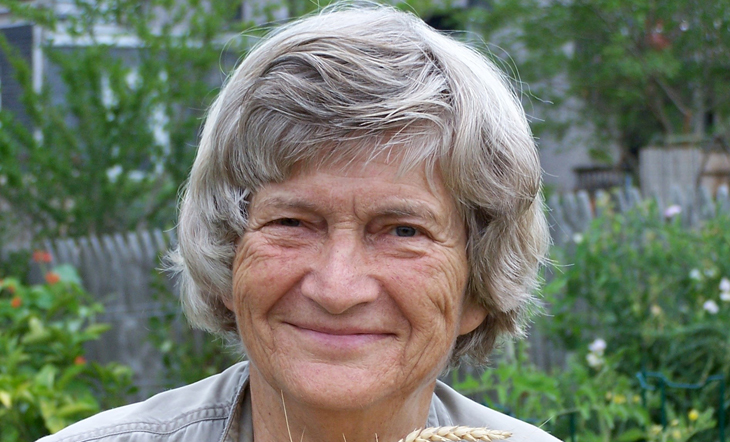 Honored for her pioneering advocacy of sustainable, healthy food production and for her work as an author, educator, and food policy expert.

At 89 years old, Joan Dye Gussow doesn’t hesitate to claim her place within the food movement. “I was completely a renegade nutritionist when I entered the field,” she says. “I was talking about things that nobody else talked about, connecting the food system with eating.” Five decades after she joined the nutrition program at Teachers College, Columbia University, Gussow is still teaching there, still speaking out about flaws in the food system—and still inspiring a growing roster of food activists to follow in her footsteps.

“I think everyone who’s ever been involved in the food movement needs to recognize that we stand on the shoulders of giants, and that Joan is certainly one of them,” says 2016 JBF Leadership Award recipient Raj Patel. “The span of her work is remarkable. It ranges from the problems with industrial agriculture to the importance of gender equality at the heart of a transformed food system.”

Gussow does more than just talk—she lives her beliefs. She hasn’t shopped for vegetables in years, choosing to eat only what comes from her garden. That practice has brought its own form of renown: in an article about Gussow and her garden, the New York Times dubbed her the “matriarch of the eat-locally-think-globally food movement.” And Michael Pollan, author of The Omnivore’s Dilemma and 2014 JBF Leadership Award recipient, traces one of his signature achievements to Gussow’s example. “You know my famous slogan, ‘Eat food. Not too much. Mostly plants’? It begins with Joan,” he says. “I went up to her place on the Hudson and we sat in her garden, and I asked her to reduce everything she learned about how to eat to a simple phrase, and she said, ‘Eat food.’”

Gussow’s official positions include ten years as chair of Teachers College’s Department of Nutrition and Education, plus stints on panels and committees with the National Academy of Sciences, the Food and Drug Administration, and the National Organic Standards Board. But it’s her groundbreaking course, Nutritional Ecology, which she still teaches annually at Teachers College, that may prove to have the most lasting effect.

“I never go anyplace related to the field that somebody doesn’t turn up who was formerly a student of mine and says to me, ‘Your course changed my life,’ or ‘Everything I’ve done was because of you,’” Gussow says. “I think that’s probably what I’m happiest about, to know that when I go, there will be people in the world who will still remember that I had this effect on them.”