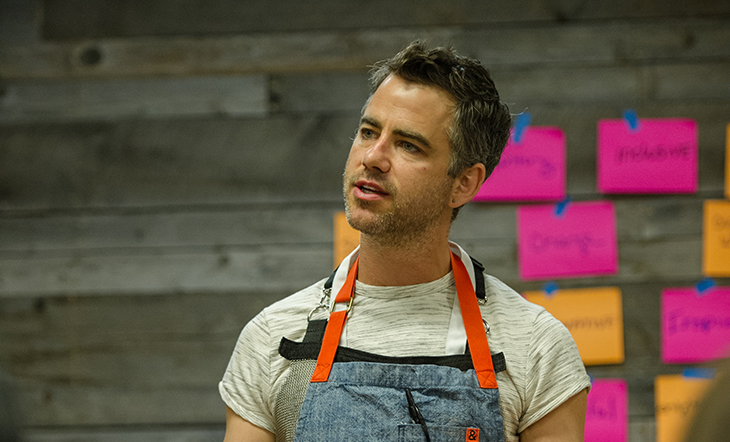 JBF Culinary Labs, a part of our new Impact Programs, is a series of gatherings held around the country that offer chefs experiential learning opportunities around food systems issues such as sustainable seafood. Our most recent lab took place last month in Bentonville, Arkansas, and featured a workshop from JBF Award–winning author and butcher Adam Danforth, who walked the chefs through the ins and outs of whole-animal butchery. We chatted with Danforth about his views on the meat industry, why we should eat older animals, and the first steps to becoming a more conscious carnivorous consumer.

JBF: People might be surprised to hear a butcher advise them to eat less meat—why do you advocate for it?

Adam Danforth: As a child, a bumper sticker plastered across my parents’ car proclaimed the simple mantra of controllable protest: “Think Globally, Act Locally.” Gargantuan problems abound within our industrialized agricultural systems. I want to help move us in a more positive direction, so I begin with my home.

The first step is consuming less meat. Eating less meat means reducing my food budget, since meat is the most expensive ingredient on my list. I use smaller portion sizes, around 4 to 6 ounces per person. I squeeze more portions from meat by focusing on meals that use it as a component of the dish, rather than the central element, like stews, soups, and pastas.

While improving the health of my family, I’m also helping my local economy by purchasing meat from local farmers. On top of that, I’m helping my local environment by reducing the demand for resources needed to raise livestock on an industrial level.

JBF: Why is it better to eat mature animals?

AD: I prefer the meat from mature animals, those that have lived in pastured environments and have been given the opportunity to exhibit natural behavior over the course of their lifetimes.

Let’s talk about the origin of flavor in meat. The larger the workload on a muscle, the more potential for flavor it develops. The longer an animal lives, the more its muscles have worked. So an older animal is more flavorful than its younger counterpart. Older animals tend to be eschewed based on a stigma that they have poor texture and "gamey" flavor, but given the right husbandry and postmortem conditions, older animals can provide a better product than younger ones, and at a more reasonable cost.

Older livestock can be a bit harder to find, but availability is increasing around the country. This increase in demand will help farmers recoup the investment into these animals, providing them with a market for this incredible product.

JBF: Is there an animal you wish Americans would eat more of?

AD: Goat is the most widely consumed red meat in the world, yet we consume a negligible amount in the United States. Goats are wonderful animals to raise, are adaptable to a wider variety of conditions than any other ruminant livestock, and produce a dairy product that is arguably the most nutritious and least disruptive digestively.

There is widespread suspicion that goat meat tastes bolder, stronger, or “gamier” than even sheep meat. In actuality, goat meat is very mild and sweet, lending itself to a wide variety of applications and is better suited for the American palate. When we see goat meat on a menu it’s usually “kid” goat, a young male byproduct of a goat dairy operation. I would prefer to see more farms raising meat-specific breeds, or the males from dairy operations reared to an older age, enabling a better product at the end.

JBF: What is the first step the average person can take to be a more conscious consumer of meat?

AD: Eat less meat. This is possible for everyone in every demographic and has the power to be truly revolutionary. Once meat consumption is reduced, then we’ll have the possibility of focusing on other priorities, like husbandry, locale, and more.

Learn more about the JBF Culinary Labs and our Impact Programs.

Take the Plunge with Our Oceans Quiz