A Meal of Mixed Reality 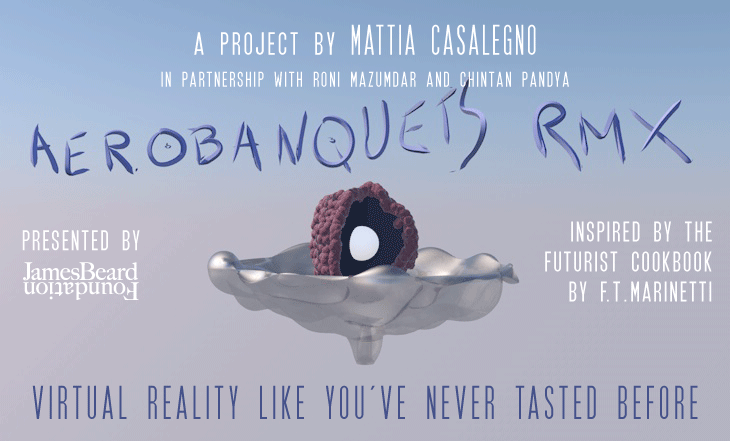 The James Beard Foundation is guided by our mantra of “good food for goodTM.” For chief strategy officer Mitchell Davis, that means digging into the complex relationships of our current food system through global conversation, finding ways for the Beard Foundation to collaborate with others in envisioning the future, and making sure that chefs have a place at the table when we talk about feeding our planet both sustainably and deliciously. Below, Davis introduces the new mixed-reality exhibition taking place at the Beard House this fall, and explains how artist Mattia Casalegno's vision aligns with our efforts to explore the facets of food and dining that make them integral to American culture.

Art and food have always had a complicated relationship. Since Aristotle first put taste at the bottom of his hierarchy of the senses, philosophers of aesthetics have dismissed the potential of food to reach artistic heights. That hasn’t kept chefs and their fans from claiming they are artists—but those in the art world have begged to differ. Still, as subject, object, and even medium, food has intrigued artists throughout the ages.

Technology has had an equally complicated relationship with food. The rise of the modern food industry was due in part to the Progressive Era application of science and technology to food production, viewed at the time as a positive development which emphasized efficiency, hygiene, and health. Today, the application of technology to food has a different resonance. Hamburger-flipping robots, genetically modified tomatoes, and laboratory-engineered meal supplements, paint a dystopian picture, a counterpoint to the foodie paradise of farms and craftspeople.

To the banquet of ideas about food, art and technology, the James Beard Foundation is adding a new provocation. Working with the New York–based Italian artist Mattia Casalegno and the Rahi Restaurant Group, the Foundation is installing a unique mixed reality art and dining experience called Aerobanquets RMX on the fourth floor of the James Beard House. Dining and reality may never be the same.

Inspired by Italian poet-activist Filippo Tommaso Marinetti’s 1932 work The Futurist Cookbook—a seminal text of politics, food, technology, and farce—Aerobanquets is an immersive, interactive virtual and augmented reality multicourse meal. Part art installation, part dining experience, part video game, the experience plays out over the course of an hour. Up to four guests at a time don VR headsets and headphones while they sit at a custom crafted table in a room of the Beard House fitted with cameras and other technology. As the experience unfolds, VR imagery creates different scenes, while “courses” (complex bites, really) of food arrive to be consumed by the diners. When the food enters the virtual world, conveyed on custom plates made by the artist, it is rendered visually in unusual and unexpected ways. “I clung to a table’s edge or straightened my posture to avoid drowning in a quick-rising milky ocean,” noted Richard Morgan in Bloomberg. “I disregarded reality, keenly aware and unaware, the mystery of the food and surreality of the visuals amplifying each other.”

The food will be prepared by Chintan Pandya, chef of the innovative Indian restaurants Rahi and Adda, the latter selected by Eater as one of the 16 best new restaurants in the country. Pandya has worked with Casalegno to craft a menu of bites that delight with flavors, textures, and temperatures that evolve as you eat. The renderings of Pandya’s food in the virtual scenes are generated in part by an algorithm that takes the chemical and nutritional composition of the foods from a database and transforms them into three-dimensional augmented reality objects. “As a chef, what excited me about this collaboration was being able to cook in another dimension,” Pandya told the audience at a recent SoHo House panel. “When you separate the visual context of the food from the taste you can find new ways to be creative and delicious.”

Casalegno is known for his cutting-edge, multimedia installations that push the boundaries of art and experience. Earlier this year, Aerobanquets RMX was installed at the ACT Culture 2019 festival at the Asia Culture Center in Seoul, Korea, and in 2018, Aerobanquets RMX was featured at the Chronus Art Center in Shanghai, China. It was a critical and popular success at both. Writing in Wall Street Magazine, Sarah Corona noted, “The project is about reframing our perceptions and changing the way we experience food. It is not only a lifechanging experience, but, in a sense, a tool to reprogram all our perceptive expectations.”

The notion of manipulating our senses with technology to change the experience of eating situates Aerobanquets RMX in a trajectory that includes Ferran Adria’s techno-emotional cooking at El Bulli, outside Roses, Spain, and the exhilarating, immersive, gastronomic performances at Ultraviolet by Paul Pairet in Shanghai, China. One significant difference is that El Bulli and Ultraviolet both brought an artistic vision into the realm of the restaurant; both attained three Michelin stars. Aerobanquets RMX, on the other hand, brings food into the realm of the artist.

According to Maria Popova, curator of the beloved Brain Pickings and a fan of The Futurist Cookbook, “Marinetti saw food as the ultimate promise of optimism—a gateway to sensual freedom, imbued with carefree lightness of a children’s party and the intellectual enthusiasm of a literary salon.” He laid out a manifesto of meals that he believed would help food achieve its true potential. Marinetti’s rules required “absolute originality in the food,” “the abolition of knife and fork,” and “the use in prescribed doses of poetry and music as surprise ingredients to accentuate the flavors.” Aerobanquets RMX delivers on these imperatives and more.

Tickets are on sale now for a limited engagement that begins November 6 and runs through the end of the year. Additional time slots and tickets will be released from time to time, so check back often. Tickets cost $125 per person for an hour experience with more than seven “courses” of food.

Tickets are nonrefundable. Three menus are offered: standard, vegan, and one free of major allergens (namely, nuts, seeds, and seafood); the menu for each ticket must be selected at time of purchase.

Aerobanquets RMX is made possible by the generous support of San Pellegrino Natural Sparkling Water, celebrating its 120th anniversary this year with the theme “Beyond,” as well as generous gifts from the Elkes Foundation and Meryl Rosofsky and Stuart Coleman. Additional thanks go to Gail Simmons, who narrates the mixed reality experience.