Diplomacy By and For Dinner

Food as a means to bring others to the table

The James Beard Foundation is guided by our mantra of “good food for goodTM.” For chief strategy officer Mitchell Davis, that means digging into the complex relationships of our current food system through global conversation, finding ways for the Beard Foundation to collaborate with others in envisioning the future, and making sure that chefs have a place at the table when we talk about feeding our planet both sustainably and deliciously. Below, Davis reports on the Foundation's efforts around culinary diplomacy, and reports back from a recent conference on nation building through food.

At a time when it feels as though many of our institutions are being shaken, we at the James Beard Foundation find ourselves asking what role food might play. It can be just as effective as a peace offering as it can be weaponized to incite conflict.

As we know well at the Beard Foundation, food brings people to the table. A growing understanding of the role food can play in a variety of socio-cultural and political arenas has led to the development of a subset of cultural diplomacy called culinary (or gastro-) diplomacy.

By inviting chefs from around the world to cook at the James Beard House and planning occasional events abroad throughout our history, the Foundation has always played an informal role in food diplomacy. But in 2012, we formalized our diplomatic programs in conjunction with the U.S. Department of State. Our work began under the auspices of Secretary of State Hillary Clinton after the signing of the five-year Diplomatic Culinary Partnership (DCP) that established the American Chefs Corps, a band of roving gourmets who supported State Dinners here in the U.S. and represented American diplomatic objectives abroad.

The Foundation’s participation in the programming of the USA Pavilion at Expo Milano 2015 was a culmination of sorts of the Chefs Corps’ work. The theme of the Expo was “Feeding the Planet, Energy for Life,” and the theme of our pavilion was “American Food 2.0.” Some 65 Chefs Corps chefs from across the U.S. came to cook at the James Beard American Restaurant, which the Foundation operated atop Milan’s famed Galleria in the city’s historic center. The positive attention and press these multicultural American chefs received  helped change the reputation of Americans and their food among visitors, a surprising number of whom expected to see fast food served in an American restaurant. Instead they saw Mexican food, Southern food, Native American food, and yes, even Italian food, the last so good that one Milanese critic deemed it some of the best he’d ever had.

Since the DCP expired in 2017, we have continued working with various embassies and consulates around the world, bringing chefs who showcase not only American ingredients, food, and food culture, but also democratic American values and ideals. In April of 2019 James Beard Award winners Traci Des Jardins and Mary Sue Milliken participated in one of the State Department’s Arts Envoy programs. This year we are planning five events with the U.S. Embassy in Paris and our consulates around France to bring chefs to cook and speak in one of the world’s most important gastronomic centers. A similar program for the U.S. Embassy in Colombia is in development.

At a recent conference in Abu Dhabi, United Arab Emirates, put on by the New York University Abu Dhabi Institute, scholars, artists, cooks, restaurateurs, and policy makers gathered to unpack the topics of culinary diplomacy and nation building through food. Called “Cooking a Nation: Global Perspectives and Local Insights on Culinary Nationalism and Diplomacy,” the meeting was organized by anthropologist Jonathan Shannon and Hanan Sayed Worrell, author of the Emirati culinary compendium Table Talks. Topics ranged from the distorted regionalism represented in the New Nordic Cuisine, to the culinary appropriation of Palestinian food culture, to gender and culinary identity in Lebanon, to the economic and cultural impact of Brexit on Scottish whisky and haggis.

As a global destination for business and tourism, the Emirates are trying to craft a national food narrative rooted in the history of their people and the diversity of their population. Faced with the challenge of desert agriculture, the transiency of their workforce, and a short 50-year history, finding an authentic food story to tell is not easy. But an effort is being made nonetheless because of the perceived value of a developed food culture to attract people to the area, but also to help soften perceptions of Emirati culture and to instill a sense of pride among its citizens. Worrell’s book is an attempt to lay the groundwork by sharing the stories and recipes of local cooks, hosts, and chefs.

Positing a phenomenology of food, Nigerian actor and NYU professor Awam Amkpa proposed that food is both powerful and problematic when it comes to imagining a national identity because its consumption stops time at that moment, erasing the lengthy histories, legacies, and cartographies represented by that food. “By nature, food is a composite of historical exchanges. When you build that into the identity it is a destabilizer,” Amkpa said. “As individuals we our own food and identity journeys we are all in excess of a national identity.”

Stimson Center fellow Johanna Mendelson Forman, who teaches a course at American University on Conflict Cuisine, provided a sweeping overview of food and diplomacy, noting the evolving role food plays in statecraft, in nation branding, in cohering social movements, in mass migrations, in global politics. “Culinary culture is dynamic in a time of increasing mobility, social media, and greater access to food products,” Mendelson Forman concluded. “The foods, the identities we hold onto through food, 'demonstrate the power of citizen-based food diplomacy, or the democratization of eating, that remains one of the great shifts in our use of food to promote a broader social agenda.'”

James Beard said famously that “food is our common ground.” But in order to fully understand and use its power, we must recognize that food is just as likely to pull us apart as it is to keep us together. Eating and food shopping around America have never been more diverse, and yet anti-immigrant sentiment and xenophobia have rarely been as heightened. At the Beard Foundation we intend to continue to participate in culinary diplomacy programs to help emphasize the importance and power of food, both to nourish our bodies and our identities, and the role that chefs can play in making our world a better place. 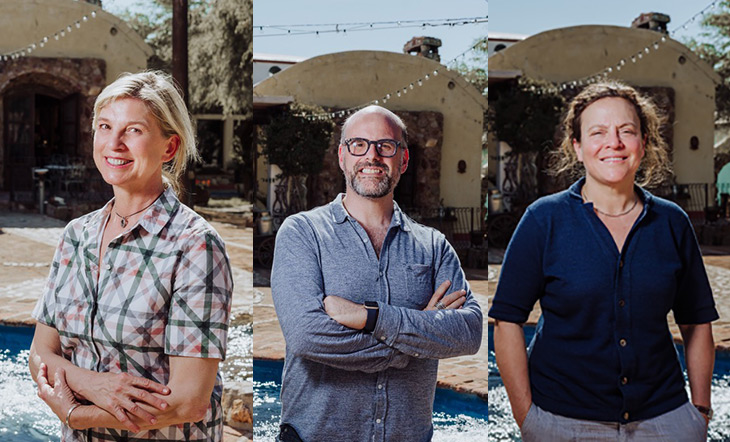 These Chefs Have Diplomacy on the Menu