How Charlotte's Chefs Are Welcoming All to the Table

Breaking bread to break down barriers at the first Community Feast

When we say the James Beard Foundation is about good food for good, it’s not limited to sustainable agriculture, the Farm Bill, or reducing food waste. Another important aspect of our mission is highlighting the myriad hands that are helping to shape American cuisine. Below, Keia Mastrianni reports from Charlotte, North Carolina on the city's first Community Feast, where local chefs collaborated on a family-style dinner designed to bridge socioeconomic and geographic divisions through a shared meal.

On a balmy August evening, inside an old Ford Factory in Charlotte, North Carolina where Henry Ford once assembled the Model T for mass production, an assemblage of a different sort coalesced. Nearly 200 people gathered in the industrial space, now repurposed for events, to share a meal prepared by 16 Charlotte chefs. Over a family-style dinner, diners of all ages and income levels were welcomed to the table to share in Charlotte’s first Community Feast.

The event was the culmination of an idea sparked in early June at the James Beard Foundation’s Charlotte chef summit. The cohort of 20 Charlotte chefs, food writers, educators, and agricultural advocates discussed equity and accessibility within the city’s food culture, and what came up over and over again were these words: leadership, equity, community, mentorship, and living wage.

The conversation centered on what chefs can do to improve the conditions of the communities in which they cook. Greg Collier, chef/owner of Uptown Yolk and the forthcoming Leah and Louise, lent his voice: “As a black chef, I feel like I need to say, ‘What community are we talking about?’”

In 2014, the Equality of Opportunity report, also known as the Chetty Study, ranked Charlotte last among the 50 largest U.S. cities in upward mobility. Data from Leading On Opportunity, an organization working to create change for Charlotte-Mecklenburg children, youth, and families affected by race and income inequalities, reports that access to economic opportunity in Charlotte-Mecklenburg is far too often aligned with one’s zip code. For all of its exponential growth, the area experiences “profound segregation by both race and income” through discriminatory practices implemented by the state and federal governments reaching back as far as 1910. In Charlotte, opportunity-rich areas skew majority-white, while opportunity-poor neighborhoods skew majority non-white.

Clark Barlowe, chef/owner of Heirloom Restaurant, a fine-dining restaurant situated in a blue-collar, majority-black neighborhood in northwest Charlotte, recognizes the disparity in his dining room. “Customers in my restaurant are 75 percent, maybe 80 percent white,” says Barlowe. So, he asked himself what he could do to better serve the people in his neighborhood. He started by making an active food pantry—selling local produce, proteins, starches, grains, and homemade stocks at cost to his neighbors. In July he added a “pay-what-you-can” dish to his restaurant menu. Barlowe’s “pay-what-you-can” efforts became the catalyst for the Community Feast.

Collier, also the co-founder of the Soul Food Sessions collective, a group created to highlight the contributions of African-American food and beverage professionals in the city, spearheaded the Community Feast. The dinner was designed to reduce the disconnect between charity and actual community work.

The chef-organizers decided to invite community members from all neighborhoods and income levels to the table. Tickets were offered on a sliding scale from $20-$120, and 80 tickets were distributed at no cost via partnerships with individuals who work within specific neighborhoods. Hector Gonzalez, head chef at Project 658, an organization that works intimately with the at-risk families in international and refugee communities on Charlotte’s east side, brought 15 guests.

To further give back, Collier chose to donate the proceeds of the dinner to Heal Charlotte, a nonprofit founded by activist and former chef Greg Jackson that works closely with youth in his neighborhood in northeast Charlotte. After the 2016 shooting of Keith Lamont Scott, Jackson channeled the energy he used to protest police violence into something more. Heal Charlotte offers rental assistance, after-school programs, and serves as a liaison between the Charlotte-Mecklenburg Police Department and Jackson’s community.

The night of the feast, folks from the east and west sides of Charlotte joined those from more affluent parts of town. Jackson brought his boys from the after-school program, along with their mothers who got to taste foods made by Charlotte’s best chefs—access that had previously been out of reach for most of them. Volunteers and executives from local and national community organizations served 16 family-style courses, and overflowing plates passed over black, brown, and white hands.

“My kids got to meet people that have invested in them, and that goes a long way,“ says Jackson. “We don’t think there are people outside of our community that actually care about what’s happening inside, so to have all those people that don’t walk like, talk like, or look like people from my neighborhood meant a lot.”

Over the phone, you can hear Jackson still beaming. “This opened up a lot of people’s eyes about what chefs can do, what the restaurant industry can do on a philanthropic level. Opportunities that start with food can transcend to other things in life.”

Keia Mastrianni is a freelance writer based in western North Carolina. You can find more of her work at keiaishungry.com and follow her on Instagram at @keiaishungry. 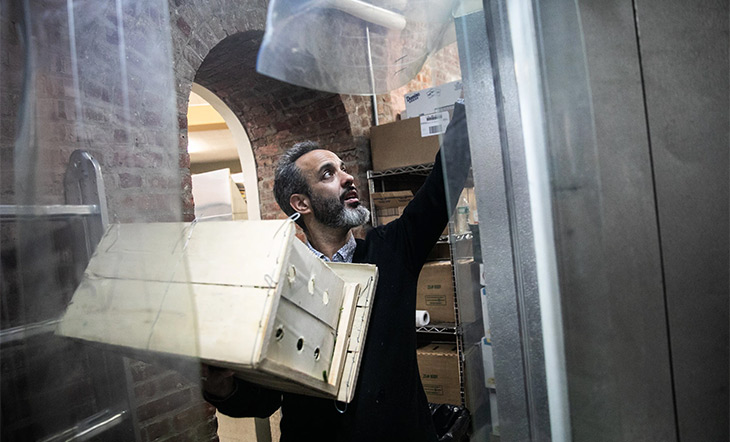 Demanding More for Your Community