It's Time to Speak Out on the Kitchen's Toll

In her latest dispatch, our senior director of food policy advocacy Katherine Miller takes a moment to mourn the loss of legendary trailblazer Anthony Bourdain, and reflects on how his death is indicative of challenges facing the mental health of our industry as a whole.

On June 8, the world learned that chef, author, and journalist Anthony Bourdain died by suicide in France. His death reignited a conversation about depression, substance abuse, and mental illness within the culinary community. Memories and tributes flowed in from around the world, from fans, colleagues and coworkers, and eaters in general. While many lauded Bourdain for his unflinching honesty about food and humanity, the posts also became a way for many to share their own struggles with addiction, depression, and mental illness.

For many outside the culinary community, it may have come as a shock that Bourdain struggled for years with a heroin addiction. Those who aren’t regular travelers in our world were also blown away that his unquenchable love of travel, devotion to hospitality, and belief in the power of food to change people’s lives masked a depression so vast that we will never fully know the breadth of it.

But for those inside this community, there is a dark and familiar truth. According to the Substance Abuse and Mental Health Administration:

The challenge of seeking treatment for substance abuse while working in an industry where a good time is the name of the game is not lost on anyone.

NPR said: “Where alcohol is eschewed in most places of employment, it's a constant in restaurants. And the late night culture means that most socializing happens at bars after work hours.”

And it’s not all about substance abuse. The pressures of performing every day and constantly pleasing staff, customers, and critics takes a powerful toll.

Prior to Bourdain, several high-profile chefs in the United States and Europe died by suicide: Charleston chef Ben Murray; Washington State chef Homaro Cantu; French-Swiss chef Benoit Violier; and famously Bernard Loiseau, the young French chef who committed suicide in 2003 purportedly upon learning he might lose one of his coveted three Michelin stars. For each new story, the media reported that depression, substance abuse, and even stress over the battle for awards and recognition might have been contributing factors to their deaths.

“People want to glamorize [this industry] so much, and they don't realize the pressures that we go through day-in and day-out," Louisville chef Anthony Lamas said. “It’s a tough job. It's high stress. You're constantly judged daily. We're constantly putting ourselves out there.”

Often the toll of that pressure is left untreated due to the culture of the industry, as well as the fact that many chefs and hospitality workers don’t have health insurance that covers substance abuse recovery programs or treatment for mental illness.

Chefs with Issues, in partnership with the non-profit Heirloom Foundation, conducted a survey that garnered more than 2,000 responses. According to Heirloom, “the top three issues reported were depression, anxiety, and substance abuse, with 73 percent reporting suffering from multiple mental health conditions.” Respondents also pointed “to the need to destigmatize mental health issues among restaurant workers, with only 2 percent feeling that they could speak openly at work. There was also evidence of a need to increase resources for effective coping among our culinary workers, with only 18 percent of respondents receiving insurance through their workplace.”

Our community isn’t alone. Since 1999, the national suicide rate has risen 28 percent, according to the Centers for Disease Control and Prevention (CDC). Nearly every state has seen a rise over that period.

And yet, the United States has made substantial cuts in mental health funding over the past decade. After the 2008 recession, states were forced to cut over $4 billion in public mental health funding. President Trump has suggested cutting even more funding through his budget proposals. At a time when we know that these issues need more attention and financial support, what is the point of gutting programs at the state and federal levels?

Even with more funding, advocates for greater access to quality mental health counseling are still faced with the challenge of trying to change a system that stigmatizes people for needing help, and is largely only available to those who can pay out-of-pocket (for example, in California fewer than half of therapists take insurance).

There is some indication that non-profits and local organizations are starting to try and bridge the gap, but services for those in the restaurant community can be very localized and hard to find. (We’ve compiled a short list of resources below.)

We need more. The deaths within our culinary community are unacceptable, whether by suicide or from overdoses. This will require all of us to act with compassion, ask people how they are, find ways to support our staffs and teams when they need help, and push for changes to the system that is contributing to this crisis in our industry.

It may come too late to save the ones we’ve lost, but the fight is worth it for the opportunity to be able to help others.

If you have suggestions of other groups or organizations, please email impact@jamesbeard.org. 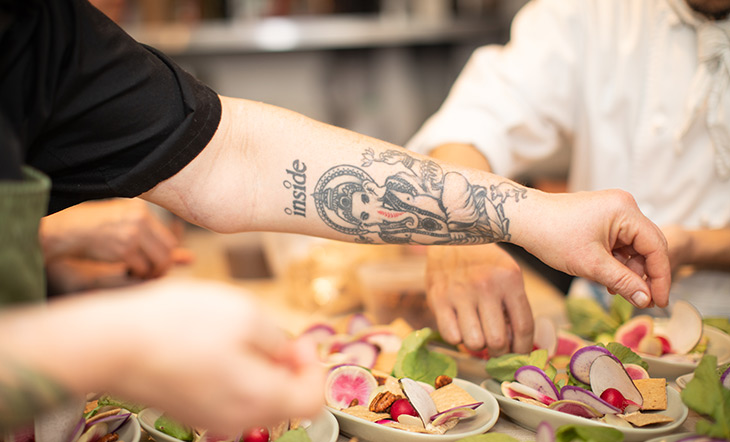