How did the founder of the country’s very first organic-certified restaurant get her start? And what did James Beard have to do with it?

Before farm-to-table, root-to-stalk, or nose-to-tail were foodie catchphrases, there was Nora Pouillon. Her acclaimed Washington, D.C. spot, Restaurant Nora, was the country’s first certified organic restaurant, the product of Pouillon’s tireless efforts working with local farmers who brought her whole animals and organic ingredients.

While she eschews some of today’s buzzwords (“Farm to table—what does that mean?” she says, “Even McDonald’s is farm to table”), Pouillon embraces her role as a pioneer in the culinary world. Earlier this month, Pouillon stopped by the Beard House for an installment of our Beard on Books series, where she discussed her her new book, My Organic Life.  She described how she used to tell people that she made “additive-free” food because in the 1970s, most people didn’t know the term “organic;” how she listed the farms on the back of the menu long before the practice was de rigeur; and what James Beard had to do with it all.

“I never went to cooking school, so I learned how to cook from reading books by Elizabeth David and James Beard,” she told the group, who had gathered in Beard’s former bedroom to hear her speak.

Pouillon grew up on a farm in the Alps where she first learned about food. “I was just a toddler,” she said, “but it’s amazing how those good memories stick with you.” She and her husband moved to America in the 1960s, and she was shocked when she first visited a grocery store: “Nothing was seasonal. Everything seemed so sterile.”

“James Beard was the only American food writer I knew who used local ingredients,” said Pouillon. “He said how important it was to eat local and seasonal.” And because she had to scrimp and save, her favorite Beard book became How to Eat Better for Less Money. “It became my bible,” she said.

“So it’s no wonder that when Beard showed up at Restaurant Nora, it was much more exciting to me than any other celebrity or politician,” Pouillon writes in My Organic Life. She describes this event, which was in the early 1980s, just a few years before Beard died.

“He was in poor health,” she remembers, “his gout was so bad that he was wearing house slippers.” Pouillon says she gushed over Beard, and asked his advice. “I told him about how I was buying whole animals, and how out of the 1000 pounds of beef, there were only about 250 pounds that people wanted, and I had a hard time selling the rest of the beef to the customers. He told me, ‘Don’t give up. Just make it taste good, and they will love it.’”

We also found another connection between Pouillon and James Beard: “I have nothing against butter,” she told us. “My desserts are killer.”

To learn more about Nora Pouillon’s fascinating life and career, pick up a copy of My Organic Life wherever books are sold, or at our online store.

For more on our Beard on Books programming, click here. 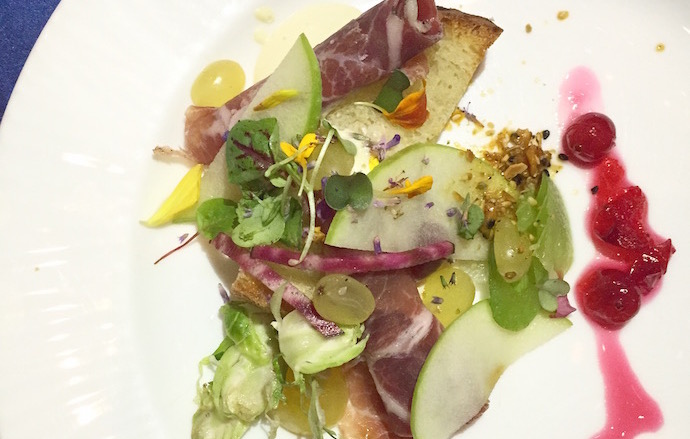