Paris, Pastry, and a New Perspective

Applications are now open for 2019 James Beard Foundation scholarships! Each year, the Beard Foundation offers tuition wavers and grants to students across the country eager to further their education at a culinary school or hospitality institution, college, or university. Whether you dream of running an award-winning restaurant, aim to discover ways to make our agricultural practices more sustainable, or hope to spread connection through the exploration of food history and culture, there are opportunities and scholarships available to you.

During this year's application period, we're checking in with previous winners to learn their stories and see how the scholarship has impacted them. Below, writer and pastry chef Klancy Miller reflects on her time at Le Cordon Bleu in Paris, and how experiences inside and outside the classroom influenced her career.

When I was 21 and graduating from college, I assigned myself a mission: turn the conundrum of what to do professionally into an enjoyable adventure, an exciting puzzle. I worked as a researcher at a non-governmental organization during the week, and after work and on weekends I explored other potential career interests. I danced, took film-editing and documentary-making classes, acting workshops, and cooking classes. The cooking stuck.

Soon I was using my weekends to apprentice at Fork Restaurant in Philadelphia. The chef, Anne-Marie Lasher, advised me that I didn’t have to go to culinary school to become a chef, but that it might make sense if I wanted to focus on pastry. I love sweets and France and wanted to go back to school to specialize in something, so an idea flashed: go to Le Cordon Bleu in Paris to study pastry. The only question was, how was I going to pay for it?

It took a James Beard Foundation scholarship, working two jobs, living at my parents’ house to save money, and a gift from them in order for me to attend Le Cordon Bleu Paris. But it was all worth it: the experience of studying classical French pastry and living in France was empowering and life-affirming. My first home in Paris was at 10 rue Coypel in the 13th arrondisement. I felt a sense of independence—being on my own in the City of Light brought a new and exciting feeling that anything was possible, and that dreams could come true.

My nine months at Le Cordon Bleu felt like a food lover’s fairy tale. Classes were divided into les démonstrations and les pratiques. In demos we watched the chef prepare a masterpiece that we would later attempt to make in the practical class. During my first demo, the chef told us that we must learn to eat with our eyes and always have the presentation of the dish at the forefront of our minds.

Outside of school, Paris was an invaluable classroom. I explored food markets in every corner of the city, from rue Mouffetard to the marché bio (organic market) and from Château Rouge to Belleville to La Grande Epicerie. I began cooking for myself everyday. Little did I know that that practice would lead to me writing a book called Cooking Solo: The Fun of Cooking for Yourself.

The next phase of my education was a stage (apprenticeship) negotiated by Le Cordon Bleu at one of the renowned restaurants and bakeries throughout Paris. My first stage was at Beurre et Cacao, a salon de thé in the fancy 16th arrondisement. Life in this pastry kitchen was rarely normal. The baker showered in the kitchen. The owner was arrested on the premises, handcuffed, and escorted out by the police. The cakes were frozen for weeks; the employees were not paid for months at a time. Miraculously, a friend apprenticing at the three-Michelin-star restaurant Taillevent invited me to stage there for a day, and the pastry chef invited me to return full-time after the summer break.

Everyday at Taillevent was a delight. We worked with the best ingredients imaginable, created delicious, edible pieces of art, and I learned about the discipline and rigors of working in one of the city’s best restaurants. I loved working at Taillevent, but soon realized I wasn’t speedy enough in the kitchen. I also felt worn down by the 12-hour days, and needed to begin earning money, so I started to consider options outside of the kitchen. Just as I was thinking about what to do next, I learned about an opening on the recipe development team at Le Cordon Bleu Paris. I got the job, and through it learned how to write recipes. On the side, I began writing freelance about food for the site Bonjour Paris.

All in all, I lived in Paris for four years. Everything I’ve done since my return to the States—from starting a supper club with a friend to ghostwriting for a chef, to working as a publicist for a restaurant and bakery, to writing freelance, to teaching cooking classes and writing my own cookbook, Cooking Solo—has been informed by what I learned in Paris.

As my career in food continues to evolve, it resembles a patchwork quilt. I have appeared on Food Network’s Recipe for Success and Cooking Channel’s Unique Sweets. I have been featured in the New York Times Food section, and written for Cherry Bombe, Bon Appétit, Food 52, the Washington Post, and the New York Times. I was recently named part of the Cherry Bombe 100. I develop recipes for different publications, teach cooking and recipe-writing classes, and I’m working on a second cookbook as a follow-up to Cooking Solo. I’m an advisory board member for Equity at The Table, a database for food industry professionals featuring women of color, gender non-conforming individuals, and the LGBTQ community. I also work as a writer in a different capacity—in fundraising.

Le Cordon Bleu taught me about pastry, and the experience of living in Paris helped me to develop a better approach to eating, being a woman, being alone, finding romance, entertaining, and cooking and sharing what I learned with others. In my time since returning from France I feel like I’m still growing and figuring things out, setting new goals, meeting more collaborators, gaining more confidence. I continue to be grateful that I have a solid foundation in food—from my first restaurant job experience at Fork to my studies at Le Cordon Bleu Paris and beyond, and I’m excited to see what I do next.

Klancy Miller is the author of Cooking Solo: The Fun of Cooking For Yourself. Find her on Instagram @klancycooks or at klancymiller.com. 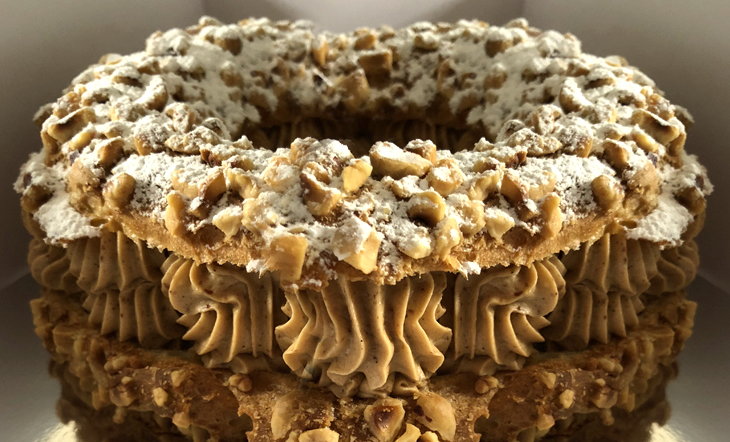