I was at the first Chefs Boot Camp years ago, a deer in the headlights, but a passionate, albeit somewhat lost member of my cooking community. That wonderful symposium at Blackberry Farm was a pivotal moment for me. It showed me that the Beard Foundation was not just a giver of awards, but also a sherpa of goodness. It made me a believer in their leadership and in the slowly cultivated power and knowledge they had amassed over three decades of operation. I was proud to be there.

Finally, someone was harnessing my ideas of community engagement and making them viable, walking me through how to lay out an argument for legislators and policy experts, and how to show them the frontlines of the food system from my vantage point. At Blackberry Farm, surrounded by my peers and hearing their thoughts and ideas about school food, sustainability, subsidies, and civic duty, I quickly realized how giving chefs are of their wisdom and time. It vanquished any notion that we should “just shut up and cook.” This was our path to meaningful citizenship in the food space.

Since then, I have been to two boot camps: one in Bentonville, Arkansas, which was an incredible deep dive into farming in the South, and the second just a few weeks ago at the bucolic New Farm, located just north of Toronto in my native Canada. This was the first Canadian iteration, the result of a partnership between the Beard Foundation and the visionary Community Food Centres Canada (CFCC), a non-profit group that has taken the idea of food education to a whole new level in their efforts to eradicate food insecurity. CFCC endows their entire operation with dignity, respect, and an honesty that is absent from a lot of food banks or emergency services providers.

Boot camp is about empowerment. It is about equipping chefs with a way to articulate their visions and make them happen. Seeing the reaction of the chefs in attendance is one of my favorite parts of the whole experience. In an industry where we all work so hard, constantly battling the anxiety of the daily grind, boot camp is a place where others take time to make us stronger.

The CFCC boot camp focused on food insecurity, an issue that directly affects 13 percent of the Canadian population. Although we were only together for a few days, it was clear how motivating the training around speaking with ministers of Parliament (the Congresspeople of Canada) was. You could literally see the chefs getting stronger in front of your eyes. After years of trying to take on this issue, but struggling to find the right footing, they were all excited to get back to their restaurants and rally their people to confront the problem anew.

Canada is a massive country with vast tundra and mountain ranges, long distances between cities, remote and impoverished indigenous populations, and harsh winters, to boot. Solving food insecurity is not an easy thing. It relies on increases in wages, expansions to elementary and middle school culinary education programs, better access to good food within ten kilometers of all households, and a reckoning with the truth that a nation is only as good as what it feeds itself. And Canada is not alone—that reckoning needs to happen in almost every country on Earth.

On the final night of boot camp, all dozen of us chefs teamed up and cooked a vegetable-focused meal for 50 guests that was heartfelt and outstanding. Lora Kirk from Ruby Watchco was my chef cooking partner, and we made a salad with huge zucchini, torpedo onions, mangetout peas, local gouda, charred cabbage, and a green onion scape vinaigrette—simple, but stunning. It was a pleasure for all of us to just cook in a no-pressure environment after a long day of food policy discussions.

My takeaway from all the chats and seminars was this salient point: food insecurity may be apolitical, but the ways to fix it are political. Canadians, just like Americans, need to realize that we are stronger countries when we are all well fed.

Learn more about our Chefs Boot Camp for Policy and Change and our other Impact Programs.

Hugh Acheson is the James Beard Award-winning chef/owner of 5&10 and the National located in Athens, Georgia, as well as Empire State South, Spiller Park Coffee, and Achie’s in Atlanta. He is the author of four cookbooks, and also the founder of Seed Life Skills, a living, multimedia curriculum built to serve the needs of the modern Family & Consumer Sciences (founded as Home Economics) classroom. Learn more about his work at hughacheson.com.

A Chef's Cross-Cultural Fight Against Hunger 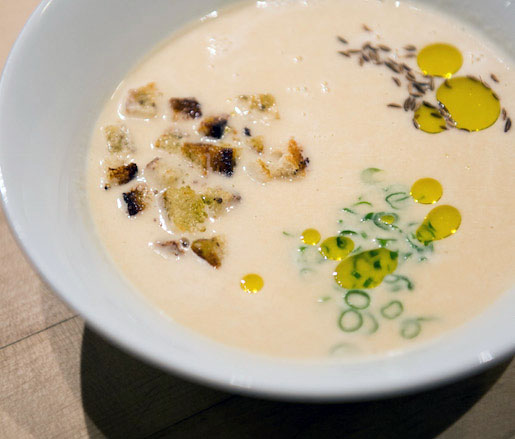