The Turning Point in My Kitchen

We all eat, which means food policy touches individuals from every walk of life, from rural rancher to cubicle dweller and everyone in between. This diversity is part of what makes the food movement so powerful. In our ongoing op-ed series, we’re featuring voices from the culinary community to weigh in and express their personal positions on the food-system issues they’re most passionate about.

Our latest piece comes from JBF Award winner and Chefs Boot Camp alum Ashley Christensen. A celebrated chef, cookbook author, and restaurateur, Christensen is the force behind Ashley Christensen Restaurants, a group of six lauded eateries in Raleigh, North Carolina. Below, Christensen reveals a critical moment that compelled her to reevaluate her role in combatting sexual harassment in the kitchen, and shares her strategies for reshaping restaurant culture around a foundation of respect.

The restaurant industry has been in cultural turmoil lately. From discussions about wages and immigration, to the restaurant labor shortage, it’s clear that the industry is undergoing a seismic shift. And nothing has been more significant than the recent uncoverings of rampant sexual harassment by chefs and restaurant groups that have until recently been viewed as leaders in the field.

Since the Times Picayune report on the Besh Group first broke, it has been an all-consuming topic, and I have had countless conversations with friends and colleagues as we all try to decide on a course of action that moves our industry in the right direction.

But the turning point for me happened, strangely, just a few months before the Weinstein and Besh news broke, before #metoo was trending.

Up until about six months ago, we approached sexual harassment from a fairly textbook, if somewhat passive, place. We had a handbook with the correct language, which every employee reads and signs upon being hired. We have an HR director who, since we brought her on in 2015, has made herself available as a resource to our team.

But beyond that, it was not part of an ongoing conversation.

Then, in the summer of 2017, a situation in our company came to my attention. An employee at one of our restaurants approached a manager to share that she was uncomfortable in the kitchen, due to the behavior of her co-workers. This person spoke up to say that she felt the behavior was par for the course in the restaurant business, but that she “expected more when coming to work for an Ashley Christensen restaurant.” It stopped me dead in my tracks, and made me realize that, even though we had put these systems in place, it wasn’t enough. These “systems” were reactive, rather than proactive. They could only respond to an already existing issue, rather than keep the issue from occurring in the first place.

I realized that the behaviors that were being described could be happening in any one of our restaurants, and likely in most restaurants across the industry. While we, thankfully, did not have issues of “quid pro quo” or of promotions or opportunities being withheld (or given) for the wrong reasons, we did have inappropriate conversations and jokes that multiple members of staff, including managers, participated in. I can only imagine how many people have felt triggered and isolated by these conversations.

In trying to find the root of the problem, I kept coming back to (and hearing) this vicious statement: “that’s just how the restaurant business is.”

It’s a passive, resigned, bullshit excuse, when the reality is that there is nothing else passive and resigned about what we do. Practically every part of the restaurant experience has evolved over the last two decades. We, as an industry, have explored and experimented with ingredients, techniques, operation styles, payment structures, venues, menus, and more. But when it comes to the safety of our employees, we’re suddenly scared to make change? Unacceptable.

As the gravity of it all started to sink in, I realized how important it was that I be vulnerable and open to investigating what my own role had been. I take great pride in creating a safe and welcoming work place for our employees, but this incident made me realize that I had a blind spot. I had unconsciously accepted the idea that crude language and behavior is just part of the industry. I thought back (as a manager for 20 years, and going on 11 years as a business owner) to the many conversations I’d walked into. I remember cooks or servers (and yes, sometimes managers) laughing out loud, and silencing upon my arrival in the room. I remember the many times I’d ask, “What’s so funny?” only to head off a response by saying, “Never mind, I don’t want to know.” Though the nasty joke wasn’t coming out of my mouth, it’s incredibly deflating to look back and realize that I was condoning this behavior by trying to “be above it.” This is a story I have shared with our entire staff (and now repeatedly with our managers), as I hope for it to inspire self-evaluation and self-awareness of what type of environment we facilitate by simply “not participating.”

It became clear to me that we needed a deep cultural shift, one that we actively contributed to. I knew that would require buy-in from our teams, and that we need to teach ourselves how to communicate honestly and openly about this issue. How could we possibly take an active role in making change if we didn’t have the language and the confidence to discuss it?

And what change, exactly, are we trying to make? A safe workplace for everyone, at a minimum, of course. But what are the bigger ideas and beliefs that lead to that outcome? For me, it keeps coming back to this: we need to believe in the idea that what we do is a profession, a truly viable and rewarding career, and that we must define it with behaviors of professionalism. What we do demands respect, and demands that we work with respect. We are fighting against a long-held cultural belief that restaurant work is a stop-gap, full of the unskilled, the undocumented, the uneducated. It has been considered an end-of-the-road of employment opportunity. Only in the last few years have chefs reached a place of cultural significance, and now it’s time to demand respect for every single person and position in our restaurants. This is a viable, rewarding, honest career.

So my team got together, first as a team of managers, and later as an entire company, and we committed to each other that we would participate in our work as a profession, not a job. We committed to uncomfortable conversations, conflict (one of the least-inviting topics for people who thrive on providing hospitality), and to constantly and consistently speak up and hold each other accountable.

The environment that has been (unintentionally) condoned and tolerated is a form of self-hate, and it will eat this business alive. This has to change. I sincerely believe that the people who make careers in hospitality are some of the hardest-working people in any industry, and we all deserve to be treated and respected as such. We’ve been our own worst enemy in not asking for that respect. So the first step is to respect ourselves and each other enough to elevate our working environment.

Here are three immediate steps that can be taken to start shifting the direction of the tide:

Ashley Christensen is the JBF Award–winning chef and owner of Ashley Christensen Restaurants in Raleigh, NC, and the author of Poole’s: Recipes and Stories from a Modern Diner (Ten Speed Press, 2016). Follow her on Twitter and Instagram. 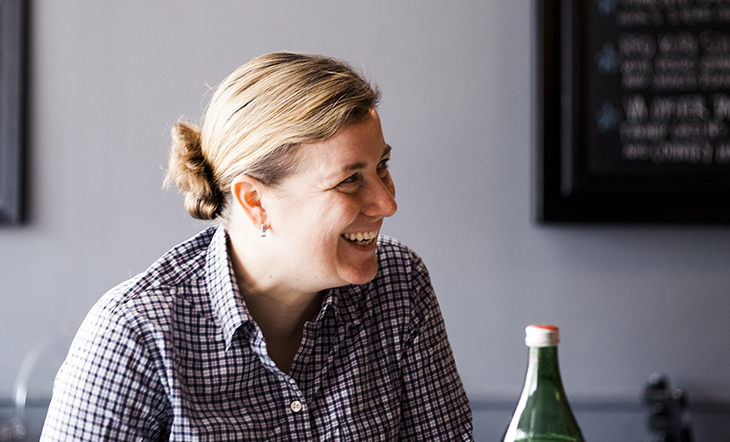