On June 16, fifteen chefs from across the country came together at Glynwood in Cold Spring, New York for the eighteenth JBF Chefs Boot Camp for Policy and Change. As with our previous Boot Camp classes, our latest group hails from restaurants and food businesses from coast to coast, all eager to learn effective advocacy skills and explore their potential power as vehicles for change in their communities. Learn more about our newest cohort of chef-advocates below.

Liz Alpern is co-founder of The Gefilteria and co-author of The Gefilte Manifesto: New Recipes for Old World Jewish Foods. She is also the creator of national fundraising party, Queer Soup Night. Alpern holds an MBA from CUNY Baruch College and is a faculty member at the International Culinary Center. She regularly consults with national food justice organization, Fair Food Network, and has been featured on the Cherry Bombe 100, the Forbes’ 30 Under 30, and the Forward 50.

Born in New York City and raised in Puerto Rico, Annette "Nettie" Colón spent her formative years learning traditional cooking methods of the island with her grandmother. Colon moved to Minneapolis in 2000, and was the chef de cuisine at Lucia’s until her departure in October 2010 when she decided to found Red Hen Gastrolab. Colon divides her time between the Lynhall, Red Hen Gastrolab, and the Break Room Minneapolis at the Historic Machine Shop. She spends summers doing Farm Dinners in River Falls, WI, teaching at the Mill City Farmers Market as a Market Chef and holding court as the Camp Chef for Chef Camp Minnesota. She is also a board member of the Northern Clay Center.

Caitlin Corcoran has dedicated much of her career to coffee, agave, and Champagne. She became general manager of Ça Va, Kansas City’s first Champagne bar, in 2014, eventually becoming managing partner. She is proud to practice radical intersectional inclusive hospitality, which coincides with her work supporting MOCSA (Metropolitan Organization to Counter Sexual Assault), her role as a board member for Women in Hospitality United, and her op-ed for the James Beard Foundation. Corcoran is 2018 Beard Foundation Women's Entrepreneurial Leadership fellow.

Spending summers in the family garden, Cassidee Dabney anchored her palate with the fresh flavors of seasonal ingredients. A graduate of the New England Culinary Institute, Dabney’s résumé includes stints in Germany, Boston, Atlanta, Hawaii, Arkansas, and Wyoming. Dabney came to Blackberry Farm in 2010 as a sous chef. In 2015, Dabney was named the executive chef of the Barn, a nationally recognized restaurant holds James Beard Awards for Outstanding Wine Program and Outstanding Service.

Spending time on his grandparents’ farm was a major influence on William Dissen’s style of cooking, as well as his beliefs in sustainable agriculture and local cuisine. A graduate of the CIA in Hyde Park, New York, Dissen’s work includes stints at the Greenbrier Resort in West Virginia, and Magnolia’s Restaurant and Cypress in Charleston, South Carolina. At his restaurants across North Carolina, Dissen works with local farms, artisan producers, and sustainable fishermen to produce acclaimed food for his guests.

Roshni Gurnani has been featured in the Boston Globe, was named one of the top five Indian chefs in America by India Currents magazine, and has appeared in Hell’s Kitchen, Cutthroat Kitchen, Beat Bobby Flay, and Chopped (where she was crowned champion). In 2018 Gurnani was invited to cook at the James Beard House, where she created a seven-course vegetarian meal reflecting her Sindhi heritage. When she isn’t traveling the world, Gurnani is a culinary professor at the Art Institute of America.

A Korean immigrant, Ann Kim credits her culinary palate to helping her mother and grandmother make traditional staples such as fermented bean paste and kimchi. Her college years at New York’s Columbia University laid the foundation for her dream of bringing great pizza to Minnesota, and her years as a freelance actor fostered her value of creativity. Kim is the culinary mind behind Pizzeria Lola, Hello Pizza and Young Joni; she was a semifinalist for the James Beard Award for Best Chef: Midwest in 2017, a nominee in 2018, and won the category at the Awards in 2019.

Mike Lata worked in kitchens in Boston, New Orleans, Atlanta, and France before landing in Charleston. His outspoken commitment to support local farmers and fishermen has cemented his position as a champion for Charleston’s culinary renaissance. In 2009, Lata received the James Beard Award for Best Chef: Southeast, and in 2018, FIG received the Beard Award for Outstanding Wine Program. Lata has been featured on Food Network’s Iron Chef America, Bravo’s Top Chef, PBS’s Moveable Feast with Fine Cooking, and more.

In early 2016, after years of producing short-term dining experiences, Joshua Lewin opened Juliet with his partner Katrina Jazayeri. Prior to Juliet, Lewin cooked at some of the best restaurants around Boston, as well as farther afield (Momofuku Noodle Bar, Charlie Trotter's), before working as executive chef at Beacon Hill Bistro. In 2018 Lewin and his company debuted a magazine, of Juliet, and opened their second restaurant, Peregrine, in 2019. Lewin’s writing has appeared in Chefs Feed, Cognoscenti, and more.

After attending the Art Institute of Phoenix, Brother Luck cooked in kitchens in Japan, Hong Kong, Chicago, New York City, and finally Colorado Springs. In 2016, Brother was awarded scholarships from the Gohan Society and the Joyce Chen and Helen Chen Foundation to expand his culinary knowledge in Japan and China. Since those trips, Luck has opened Four by Brother Luck and Lucky Dumpling. Luck also has appeared on Chopped, Beat Bobby Flay, and on seasons 15 and 16 of Bravo’s Top Chef.

With a father from Portugal and a mother from South Carolina, soulful, authentic, interesting and unique culinary experiences were a regular part of Sean Mendes’s life growing up. In 2012 Mendes opened the popular food truck Gillie’s Seafood in Charleston. A year and a half later, he opened a full-fledged restaurant under the same name. In 2016, Mendes decided to venture into the gourmet burger world, opening Blues Burger—and it has been a go-to for “top-shelf” burgers ever since.

Hilton Head native Clayton Rollison is a graduate of the CIA in Hyde Park. Rollison continued his cooking education in kitchens around the country, honing skills at top restaurants including Gramercy Tavern. When the time was right a few years later, Rollison returned to Hilton Head, and in December 2013, opened for his American bistro with Southern soul, Lucky Rooster. Surrounded by island scenery, fine seafood, and regional specialties, Rollison developed a menu of refined comfort foods and adventurous eats.

Born into a large Southern family, Mavis-Jay Sanders began mastering Southern cooking before she could even see over the counter. Sanders holds degrees from the Culinary Institute of America and Georgia Southern, and after culinary school worked at Blue Hill Stone Barns and Untitled in New York. She then joined Pico House to create incredible food and make it accessible to everyone. Sanders believes natural ingredients shouldn’t be a luxury and all people have a right to life-sustaining food. 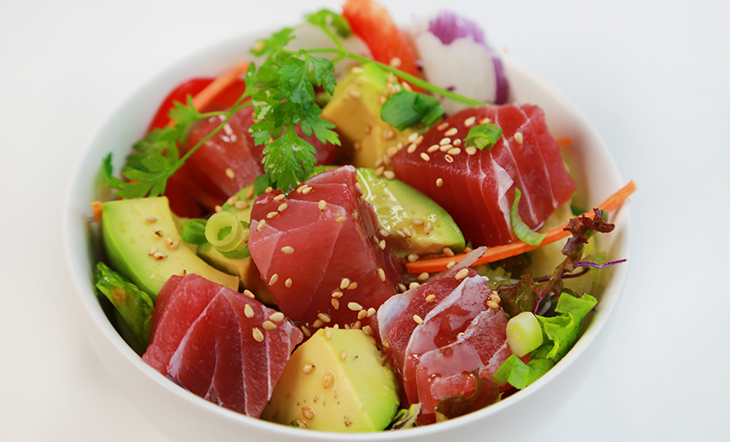 8 Chefs Enact Change on the Reel and in the Kitchen