These 16 Chefs Are Working for a Better Future

On March 3, sixteen chefs from across the country came together at the Inn at Serenbe in Chatt Hills, Georgia for the seventeenth JBF Chefs Boot Camp for Policy and Change. Like previous Boot Camp attendees, our latest class hailed from restaurants and food businesses from coast to coast, all eager to learn effective advocacy skills and explore their potential power as representatives for change in their communities. Learn more about our newest cohort of chef-advocates below.

Kim Alter is the chef/owner of Nightbird and the adjoining Linden Room. Alter formerly worked with the Daniel Patterson Group for three years at the helm of kitchens such as Haven and Plum in Oakland, California. Prior to that, she has worked in some of the Bay Area’s most notable restaurant kitchens including Manresa, Ubuntu, Aqua, and Acquerello. Alter’s menus showcase a commitment to technique, whole animal cookery, and support of local farms.

In 1993, Jameeale Arzeno left the security of a municipal job to enter food and hospitality management. After stints under Geoffrey Zakarian and as a pastry chef in Florida, Arzeno landed her dream job with Jean George Vongerichten. In 2015, Arzeno founded CHICpeas, a dynamic new model for children’s enrichment and family entertainment that provides a first-rate, four-star experience to budding chefs. In 2018, she became the James Beard Foundation’s first culinary director.

Daniel Asher is chef and partner at River & Woods in Boulder. Asher’s obsession with local agriculture, sustainable sourcing, and food justice has been his focus for over two decades in the restaurant industry. Asher was one of the pioneers in the natural foods movement in the Midwest, exclusively utilizing organic and locally grown produce, ethically raised meats, and sustainably produced ingredients. Eco-conscious cooking is his passion, and the bounty of Colorado’s wonderful terroir is incredibly provocative.

Jimmy Bannos Jr. is a James Beard Award–winning, fourth-generation restaurateur. A graduate of Johnson and Wales University, Bannos worked at the acclaimed Al Forno restaurant and completed an internship at Emeril’s in New Orleans while in school. After a six-month excursion to Italy, Bannos worked in some of New York City’s most celebrated restaurants. Bringing together his love for Italian food, the restaurant business and his family, Bannos opened the Purple Pig in 2009.

Nicolas Bour set the direction for the Farmhouse at Serenbe more than 10 years ago. Now, Bour, who briefly worked under Gunter Seeger at the Ritz-Carlton Buckhead and opened the much-loved Iris restaurant in East Atlanta in the early 2000s, has returned to Serenbe to work the chef de cuisines at the Farmhouse, the Hill, and Blue Eyed Daisy Bakeshop to fine-tune their menus and to help Serenbe open two new restaurant concepts.

Esther Choi, owner and founder of New York City’s mŏkbar and partner of Ms. Yoo, is an influential female chef driven by her Korean roots. Inspired by her Korean grandmother’s cooking, Choi believes that food is the ultimate expression of a country’s culture. She received formal training at New York’s Institute of Culinary Education and has worked across the kitchens of ilili, La Esquina, and the Food Network.

Chef Samone Darden-Lett first experienced her passion for cooking as a child, when her grandmother and father started teaching her the family recipes. At age 18, Darden-Lett enlisted in the U.S. Army, serving as a food specialist in Germany. After returning home and graduating from culinary school, she founded Wishful Concepts Catering. Her personal journey and passion for women inspired her to build an award-winning catering company that serves people from all walks of life.

Tiffany Derry is the owner of Roots Fried Chicken and Tiffany Derry Concepts, a company established to support Derry’s business and culinary ventures. Derry gained international notoriety on the seventh season of Bravo’s Top Chef and as a finalist on Top Chef: All-Stars. She sits on the James Beard Foundation's Impact Advisory Board, as well as the Food Policy Action board of directors, and acts as an ambassador for the Beard Foundation’s food waste initiative, Waste Not.

Raised in a family of restaurateurs, chef Mary Dumont was exposed to the hospitality industry from a young age. After stints on the West Coast and in New Hampshire, Dumont became executive chef at Cambridge’s famed Harvest Restaurant in 2007, garnering rave reviews and preserving the legacy of an iconic restaurant into its fortieth year. Cultivar, Dumont's flagship restaurant, opened in June of 2017, receiving critical acclaim both locally and nationally.

As executive chef at Elderslie Farm, Katharine Elder finds cooking to be the perfect opportunity to fuse her love of science and desire to create something beautiful with her commitment to showcasing locally grown ingredients. Her approach to cooking is informed by the circuitous path to her current role, which wound through the arts and health sciences. Elder seeks to create flavorful, but not always complicated food by bringing out the best in the ingredients themselves.

Angela Garbacz is the founder of Goldenrod Pastries, a women-run pastry shop in Lincoln, Nebraska, which emphasizes inclusivity by developing recipes and baking for people who are dietary-sensitive. In 2017, Garbacz spearheaded an initiative called "Empower Through Flour,” where 20 female chefs and pastry chefs from across the U.S. raised money and awareness for a non-profit organization that works to empower young girls.

Michael Haskett returned to Sioux Falls with a simple idea for a restaurant: real food made by real people. Equipped with a miniature convection oven and a couple of electric fryers, M. B. Haskett Delicatessen opened in 2012. The historic space in the Southwest Building on Phillips Ave was completely renovated in 2014, and, now with an actual kitchen, the team continues to realize its mission of inspiring creativity and connectivity through seasonally focused scratch cooking.

A graduate of Northwest Culinary Academy and Art Institute of Seattle, Adam Hegsted is owner of the Eat Good Group. He is proud to be an Inland Northwest native, and gets most of his inspiration from the region, season, and nostalgic foods from his past. A semifinalist for the James Beard Award for Best Chef: Northwest, Hegsted and Eat Good Group restaurants have been featured in the Wall Street Journal, the New York Times, and the Los Angeles Times.

Preeti Mistry was the co-founder and executive chef of Navi Kitchen and Juhu Beach Club (both now closed), as well as the co-author of The Juhu Beach Club Cookbook. Born in London and raised in America, Mistry has held executive chef roles at the deYoung Musuem, the Legion of Honor, and Google HQ. She was a contestant on the sixth season of Top Chef, and is a two-time nominee for the James Beard Award for Best Chef: West.

Dominica Rice-Cisneros is a chef, entrepreneur, community activist, and urban gardener who believes that every person deserves access to high-quality foods. She developed an appreciation for the local farmers markets and seasonal cooking during her time in Mexico City. Rice-Cisneros believes in training and providing career opportunities for local women in the Bay Area. A second-generation Mexican–American, she is inspired by the idea of carrying on and perfecting traditional Mexican recipes.

Chef Greg Silverman is executive director of the West Side Campaign Against Hunger (WSCAH) in New York City. WSCAH reaches almost 12,000 families every year, providing social service support and culinary job training, while distributing over 1.5 million pounds of healthy food. Silverman has worked in the food and hunger space for over 20 years, previously serving as the national director of Program Partnerships for Share Our Strength and its No Kid Hungry Campaign. 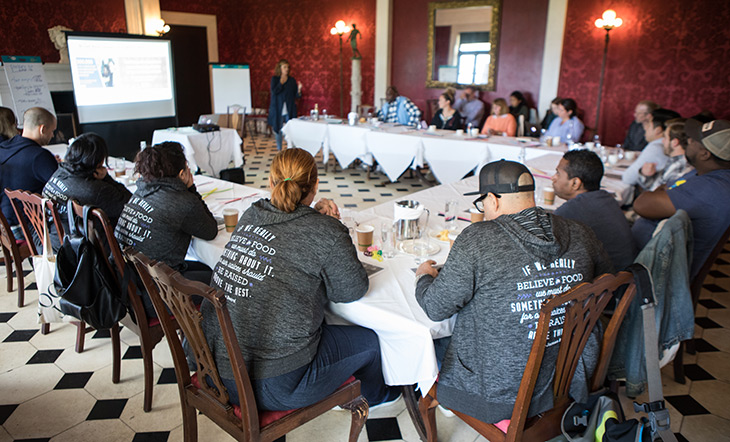 These 16 Chefs Are Pushing for a Better Food System