New York State’s picturesque Finger Lakes region beckons travelers and oenophiles with its extraordinary beauty and award-winning wineries. For an upcoming Beard House dinner, a group of local and Big Apple chefs will collaborate on a stunning late-spring menu paired with critically acclaimed wines from Bloomer Creek Vineyard. In anticipation of this dinner, we caught up with winemakers Debra Bermingham and Kim Engle, the proprietors of Bloomer Creek Vineyard; along with chefs Shaina Loew of New York City hot spot Prune; and Justin Paterson of Hazelnut Kitchen in Trumansburg, New York. Read on to see what they have to say about the bounty of upstate New York, their guiltiest food and drink pleasures, and how this special Beard House menu took shape.

Debra Bermingham and Kim Engle: When we were young, Kim and I fell in love with the broad skies and open fields of the Finger Lakes and set out to become a part of it through our efforts on our small 30-acre farm on the west side of Cayuga Lake. Bloomer Creek Vineyard was established in 1999 as part of this effort when we released our first vintage made from grapes picked in fields where raspberries once grew. The work required to become vignerons suited us, as we learned the poetics of cool climate viticulture and the nuances of each season: honeysuckles sweetening the air during spring; hawks soaring on high summer winds; trumpeting swans and geese migrating in long lines above our heads while we pick grapes in late October; Orion and the Bears constellations high and bright on clear, cloudless nights in winter. All of this is the inspiration behind our wine selection for this special Beard House dinner: Sip and Savor the Finger Lakes. Our chef friends worked to create a menu to showcase each vintage selected, sharing a similar love for the beauty of the Finger Lakes and all that it can express.

Shaina Loew: Our dinner is centered around Bloomer Creek Vineyard’s wine selections. I've known Debra and Kim for about five years, and I've always been blown away by what they produce. If you just listen to them talk about the way they make their wine, starting with how much attention they give their vines and grapes, you realize you're drinking the product of their dedication to this craft. And once you taste the wine, you understand how their work translates to the bottle. The other chefs and I have worked to create dishes that will compliment the wines Debra and Kim first have chosen. We recently did a tasting together with all three groups of chefs, and it was eerie how well all of our various dishes worked together to create a cohesive menu. I think that speaks to our approach for this menu—giving the wine the spotlight.

Justin Paterson: Spring! We wanted to showcase what the Finger Lakes region has to offer in early spring, while still holding on to some wintry cooking techniques.

DB and KE: While each course is a wonderful complement to our wine, we’re especially excited to present an older Spätlese-style Riesling—our 2010 Morehouse Road Riesling Second Harvest Vintner’s Select. This wine, with just a kiss of honeyed sweetness, pairs perfectly with Daño’s Strudel di Baccalà. It reveals both the weight and density that comes from maturity and botrytis development, while maintaining the alluring lightness and beauty of Riesling.

SL: I love both of the dishes I'm serving: Braised Monkfish with Charred Onions and Crispy Chicken Skin and Rice Pudding with Barberries, Cherry Compote, and Hazelnut Cookies. But I’m particularly happy to bring the humble rice pudding into a more upscale setting. I'm using barberries in this dish—a small, tart fruit that’s commonly found in Persian cooking—and the combination seems on point with the late harvest Gewürtztraminer its paired with.

JP: All of our dishes are simple presentations of perfect spring ingredients. We do almost nothing to the asparagus on our Ricotta Gnudi with Rabbit Sugo, Parsley Root Purée, Asparagus, and Roasted Wild Mushrooms dish. We basically just season them! This really shows what great ingredients can offer when the product is local and fresh. DB and KE: If we are in a particularly festive mood on a glorious day in the field at Barrow Vineyard (our new vineyard on a steep slope overlooking the east side of Seneca Lake) we will build a fire with grape trunks and roast hotdogs on the ends of sticks cut from the hedgerow. The hotdogs are especially wonderful if you take the time to blacken them on all sides. For drink, we usually have water, though on occasion we’ll have a bottle of Bloomer Creek Pinot Noir Rosé, which pairs perfectly.

SL: I've committed so many "crimes" in eating that it's hard for me to feel guilty anymore. One thing that I think pushes the boundary a little, though, is my "Chicken in a Biskit" with spray cheese habit. Fortunately, people still like me after knowing I order those crackers and cans by the case from Amazon.

JP: After a long day, I love nothing more that enjoying local cheese, bread, and honey with a cold cider. Gorge Trail Gouda is especially tasty.

DB and KE: To celebrate spring, Kim made coq au vin for a small group of friends from pasture-raised chicken, local pork, and our newly released 2012 Pinot Noir. Our friend Olivier, who’s from Grenoble, France, told us before the meal that only his mother prepares this dish—he had never dared to make it! Afterward, while holding his plate for another helping he declared, “C’est bon!”

SL: I've had a few recently, since I'm coming back from the tasting we did in the Finger Lakes, but something great was that the first night when I got into Ithaca. I had spaghetti and meatballs at Debra and Kim's winery. I rarely sit down to a meal, and when someone else cooks, it's a luxury. The meatballs were so good. And, of course, we were drinking their wine. What could be better?

JP: My wife and I dined at Blue Hill at Stone Barn last August. An inspiration, to say the least!

Who's been your biggest inspiration, and what would serve cook to thank them?

DB and KE: Kim and I take inspiration from the poet Li Po who wrote, “The Hermit lives on the mountain/He is plain and joyful/A handful of rice and water from the spring suffice him/Still he has kept his wine cup.” As thanks, we would pour Les Clos Sacré 2007, Nicolas Joly’s biodynamic Savennières, a wondrous wine. It’s perfect for the Hermit on the mountain.

SL: My first instinct is to say that my mom has, because she got me interested in cooking.  But honestly, the whole damn world is my inspiration, because there's something to learn from so many people, and there are so many people to cook for. Why do we cook? Because we're trying to feed people—physically and sometimes emotionally—with our food. (Along with a host of other reasons.) But I wouldn't feel inspired to get up and go to work if no one was out there looking for something to eat. And I just want to make all of you people a fried bologna sandwich to say thank you, because that's the best thing I—or anyone—could attempt to make!

JP: The Monty Python characters taught me life is silly and to not take it too seriously. I would cook them lobster thermidor and spam.

DB and KE: Katy, our assistant vigneronne, helps at her mother’s café, Creekside Café, in Trumansburg, New York. We often stop there for breakfast before opening the tasting room. It’s small and cozy and nearly everything there is made and/or grown by Katy’s mom, Cathy. Her stepdad, Charlie, takes care of the front of the house and is known for lavishing special attention to all customers under the age of five. There’s also a new cider bar in Geneva, Kashong Creek, that we’re excited about where Dan Bissell features expressive and often obscure ciders, wines, and spirits. Similar to Pearl and Ash in New York City, Kashong Creek is fast becoming the place to go for all the local winemakers who want to try something special.

SL: I don't have time to go out to eat much, but I love Via Carota so much that I go whenever I can. I want to thank them for making such delicious food and creating a space that makes me feel clear in the head. There are a lot of other places I love, but let's just say that if I died tomorrow, I wouldn't be mad if someone sprinkled my ashes in the cute little wheelbarrow outside Via Carota.

JP: Saigon Kitchen in Ithaca, New York has some of the best pho ever.

DB and KE: As winegrowers in a cool climate, our best advice has come from Tap Tapley, a wilderness guide Debra knew long ago. He said, “I knew I could outlast the situation even if I had to walk. You need to plan on taking up where you left off, where you can’t do something anymore. You just have to keep inching along and you will finish.” There have been many times in a season where we all just put one foot after another until we were finished and the wine is in the bottle.

SL: There are so many cliché things I could say, but there are two things that have stuck with me. The first is something Mark Twain and Ice Cube collectively said, "Once you find yourself on the side of the majority, you better check yourself before you wreck yourself.” The other thing, which a lot of people have told me throughout my career, is just to "keep cooking."

JP: Many years ago I was working in a corporate restaurant environment and while I was there, my chef suggested I move to Chicago and see what the culinary world is really like. “Work in as many places as possible and develop a greater passion for the culinary arts,” he said. What an eye opener that was!

Take a peek at what the Sip and Savor team will be serving at the Beard House on May 6 and book your seat. 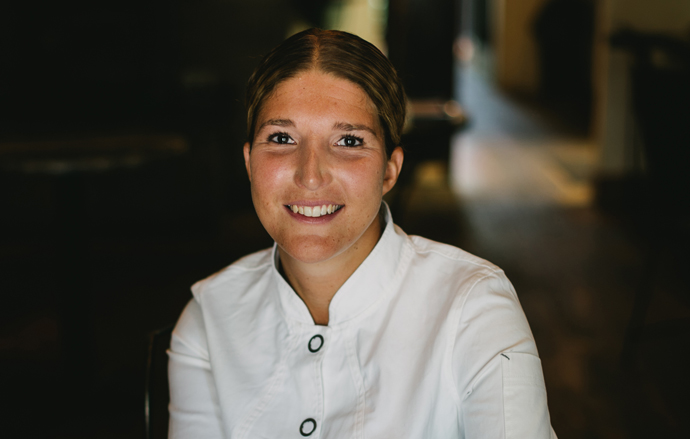