Why the James Beard Foundation is Supporting and Cultivating Female Leaders

The James Beard Foundation is committed to supporting women in the food and beverage industry, from chefs and restaurateurs to entrepreneurs dreaming up new ways to make our food system more diverse, delicious, and sustainable. Our Women’s Leadership Programs (WLP) presented by Audi, provide training at multiple stages of an individual’s career, from pitching your brand to developing a perspective and policy on human resources. As part of the Foundation’s commitment to advancing women in the industry, we’re sharing stories from female James Beard Award winners, Women’s Leadership Program alumni, and thought leaders pushing for change. Below, our vice president of Impact Katherine Miller details the challenges facing women in the food and beverage industry, and the efforts the Beard Foundation has made to bridge the opportunity gap and allow more women to become business owners and leaders.

In October 2016 the culinary world—and really the whole world—was rocked by revelations of sexual harassment and sexual assault by some of the industry’s biggest stars. Among all the tough discussions about kitchen culture, the need for greater diversity across culinary institutions (including the James Beard Foundation), and how to ensure that everyone can work in a safe environment, we also uncovered a serious lack of women in leadership positions in the industry. This is especially true when it comes to owners, investors, chief executives, and executive chefs.

The National Restaurant Association shows that 60 percent of American women will have worked in a restaurant at some point in their career. And while more than half of culinary graduates are women, according to the Bureau of Labor Statistics, fewer than 20 percent of working chefs are women.

So, what happens after culinary school? Where do all the women go? And, more importantly, how can we at the Beard Foundation help to ensure that women stay in the industry, build successful careers, and thrive both professionally and personally?

Not everyone views a culinary career as a pathway to stability—and they might be right. A career in the culinary and hospitality will challenge a person—physically and mentally. The hours are long, the conditions aren’t always great, and new problems pop up every day. It’s also an industry where benefits available in other careers are hard to find: few restaurants provide maternity leave or clear pathways of advancement beyond moving from station to station.

These are the easy-to-identify challenges facing women (and men) in the industry. But when we started digging deeper and hearing from industry leaders about what the Beard Foundation could do to help women to not only keep working in restaurants but also thrive, we found that one of the biggest obstacles is around wages and benefits.

The cost of a four-year culinary arts degree runs more than $16,000 a semester, and with entry level salaries starting at $14-$15 an hour without sick leave or family leave, it’s clear that the industry needs to reevaluate how it pays its workers. Especially when the average salary of an executive chef—a position that can take years to attain—sits around $67,253 (the range is between $57,000 to just over $81,000). The wage gap (which is even wider for women of color) is persistent and may only be successfully addressed by changes at the federal level.

The low wages, long hours, and financial risks associated with opening restaurants or food businesses are hardly news, and they didn’t stop amazing women from making their way in the industry. Icons such as Mary Sue Milliken, Nancy Silverton, Traci Des Jardins, Martha Hoover, and the next generation of stars like Renee Erickson, Ashley Christensen, Makini Howell, and Lisabet Summa are clearly growing successful and influential businesses that are both regionally and nationally significant.

It’s also not stopping women from starting new businesses. Between 2007 and 2012 (the most recent data available), the number of women-owned restaurant businesses in the U.S. jumped 40 percent.

Yet these women are still the exception to the rule. It is incredibly hard to find women moguls—those women who not only own, but also scale and invest in other food-related businesses (the lack of role models is especially acute when trying to identify women of color and those from the LGBTQ communities). Just about one-third of restaurants are majority-owned by women, and women receive less than 2 percent of all the angel capital spent across all industries.

So we’ve decided to focus on figuring out how to get more women into executive chef positions, helping more women achieve their dreams of owning a business, and inspiring investors to take a risk on growing those businesses into national and global brands.

We plan to close that gap in salaries, benefits, and access to capital through our Women’s Leadership Programs, which, over time, will address challenges facing women at every point of their career.

Our early-stage Women in Culinary Leadership (WCL) program matches women with mentors who provide them with additional training and opportunities to learn different aspects of the industry. Enterprises like this also exist around the country. The first six graduates of the LEE Initiative, created by chef Ed Lee and Lindsey Ofcacek, recently came to the James Beard House to prepare a special dinner celebrating both Kentucky’s culinary traditions and women’s leadership. Graduates of our own WCL each perform a weeklong stage at the Beard House. Each of these programs—and others like them—are giving women the chance grow their experiences beyond their own communities.

For many, the culinary and hospitality community also presents a pathway to owning your own business, which allows them to create the culture they want to see. Knowing it can be harder for women to access capital or that they might need help crafting growth plans, we created the Women’s Entrepreneurial Leadership (WEL) program. Successful applicants to this program learn from leaders in finance, business strategy, branding, and investment, and hear from other successful entrepreneurs in the industry.

The first two classes of our WEL program are already building on their own success—at least 10 of them have expanded their businesses—and they are forming powerful networks where they exchange lessons and contacts, and champion one another’s efforts. We’re also working to improve and build upon this program. With support from founding partner Audi, and in conjunction with their #DrivingProgress campaign, we awarded two Audi WEL Fellows to the program, chefs Sandra Cordero and Esther Choi. As Audi-supported fellows they are given additional, unique opportunities to showcase their businesses and deepen their professional contacts.

Knowing that not everyone can take the time to work in a restaurant away from their home base or leave their business for a week, we’ve expanded our online offerings and in 2019 we’ll launch a multi-city educational event, Owning It. This will bring business experts to women in their own communities.

We’re grateful for the support that companies such as Audi and EDENS, along with organizations such as Women Chefs and Restaurateurs (WCR), have shown for this work. We’re excited to join others in this work too, such as FAB, Cherry Bombe, Open Kitchen (by Open Table), and Restaurant HER (by GrubHub).

Collectively, we’re all working in support of creating a culinary and hospitality community that is more equitable and even more poised for growth.

According to economic experts, the nearly $800 billion American restaurant industry is only going to grow. Women owners of restaurants and food related businesses should be ready to benefit from this continued expansion.

At the Beard Foundation, we think that opportunity, combined with new initiatives to encourage more women to step into leadership, will help us not only achieve gender parity, but also create a more professional and accommodating industry for everyone. 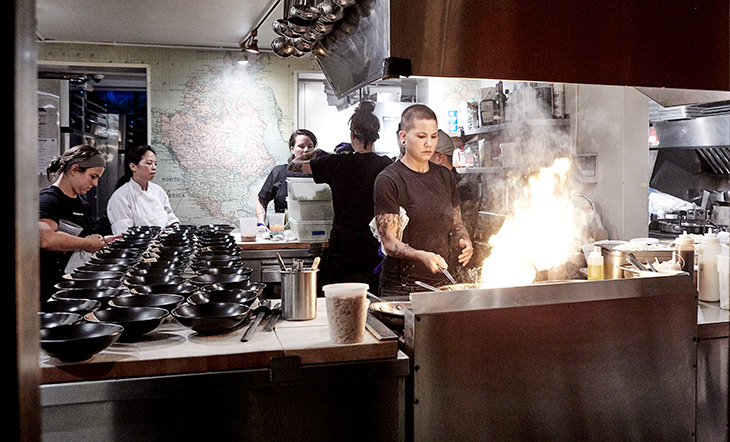 Why You Should Build Your Business with Self-Care in Mind