In the past year, thousands of incidents of racist, abusive, and increasingly violent behavior against Asian Americans have been reported across all 50 states. Asian Americans are the target of an alarming and growing number of hate crimes around the country, as seen most recently in the horrific murders that occurred on March 16, 2021 in Atlanta. We stand in solidarity with the AAPI community against this racist hate speech and violence.

If you're able to donate, support the work of organizations like Welcome to Chinatown, the Asian American Foundation, or the Asian Pacific Fund. For more opportunities to donate in support of AAPI communities, view this list of worthy causes.

The James Beard Foundation’s Open for Good campaign supports independent restaurants in order to survive the pandemic, rebuild stronger and more equitably, and thrive for the long term.

We are partnering with James Beard Award winner Grace Young on an Instagram campaign to support Chinese restaurants all across the country. All independent restaurants are in danger of closing, and Chinese Americans have faced additional hardship as racism connected to COVID-19 rhetoric has threatened businesses even further.

James Beard wrote about his appreciation for Chinese food in the foreword of the cookbook Eight Immortal Flavors by his friend Johnny Kan. "More and more I’ve grown to appreciate the subtle elegance of Chinese cuisine. It is truly, as most food experts agree, the equal of the French cuisine. Indeed, the classic cooking of China antedates the French and it has been perfected through many centuries.”

Help spread the word that Chinese restaurants are integral to America’s food culture and need our support now.

Read Why Grace Young Says “I’m Not Giving Up on Chinatown!”

Back in February, I wrote “New York’s Chinatown is on life support.” In March, for my video series Coronavirus: Chinatown Stories, I spoke with distressed restaurant owners struggling to remain open in the face of the pandemic. By April, Business Insider reported 233,000 Asian American small businesses had closed, and CNN estimated 59 percent of independently owned Chinese restaurants nationwide had ceased credit card and debit card transactions, implying they had permanently shuttered.

Although cities nationwide have since reopened for limited restaurant business—takeout or outdoor dining only— Chinatowns around the country continue to experience unprecedented economic hardship. It’s been particularly heartbreaking for me, as a Chinese American, to witness the closing of legacy businesses and restaurants that have been part of their communities for decades, some dating back over 60 years.

In New York and San Francisco’s Chinatowns, the pandemic wiped out a steady customer base of both tourism and walk-in traffic from office workers. Now facing back rent and mounting bills, and with the onset of cold weather and limited indoor dining, barely surviving establishments are hanging on by sheer grit. We urgently need the #SaveChineseRestaurants campaign, launched together with the James Beard Foundation, which asks each of us—including family and friends—to support these restaurants just by showing up, either for takeout or dining in. This is a crisis and without steady patronage, these businesses will not survive. I truly believe if we all pitch in we can save these eateries and treasured ethnic neighborhoods everywhere. -- Grace Young

Learn more about our Open for Good campaign to help independent restaurants survive, rebuild, and thrive.

'They're just irreplaceable': Why Grace Young is fighting to save Chinese restaurants (Today.com)

147 Minutes With the ‘Accidental Voice for Chinatown’ (Grub Street) 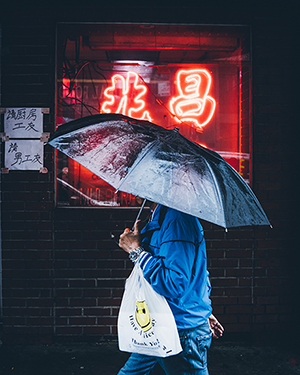 Special thanks to Dave Krugman for the photos of Chinatown that appear on this page. Follow Dave on Instagram.