2014 Humanitarian of the Year: Matt Haley

Twenty years ago, a chef at an Alexandria, Virginia, catering company took a chance and hired Matt Haley—an ex-con, recently out of rehab, and a survivor of childhood abuse. “He probably shouldn’t have hired me,” recalls Haley, “but he was loving, kind, and compassionate and took the time to work with me and teach me. There are so many people along the way, people who didn’t turn their back on me. If they had, where would I be today?”

Now the owner of seven restaurants in Delaware Beach resort towns as well as of Plate Catering and a foodservice management company (all under the Matt Haley Companies umbrella brand), chef and restaurateur Haley credits his success to his 23 years of sobriety plus countless helping hands.

As for his JBF Humanitarian Award—in recognition of his local and international efforts to help disadvantaged children—Haley believes “a thousand people deserve a piece of this. Awesome people who believed in me until I learned to believe in myself.”

Lindsey Jacona, who worked her way up from waitress to controller of Matt Haley Companies, says, “All the help he got led him to where he is now, where he’s always wanted to be. I feel he’s always trying to pay that back or pay it forward.”

The result: personally and through Matt Haley Companies, Haley gives up to $200,000 a year to nonprofit initiatives, and in 2011 he founded the Global Delaware Fund (GDF) to provide goods and services to at-risk children and children in challenging circumstances, both in Delaware and around the world. Since its inception, GDF has raised $250,000 to support Delaware organizations including the Children’s Beach House, a nonprofit dedicated to helping children with special needs; the Delaware Adolescent Program, which helps pregnant teens; the social services agency Children and Families First; and the Freeman Stage, an open-air theater in Fenwick Island.

Having witnessed and suffered violence as a child himself, Haley explains his affinity for children in distress: “I have a connection that’s kind of automatic. You know when you’re in the room with someone else who’s lived the life you’ve lived.”

On the other side of the globe, Haley has formed a very personal connection with three Nepalese girls whose education he sponsors: 15-year-old Laxmi, 13-year-old Leela, and 11-year-old Jyoti, who he says are like daughters to him. He lives in Katmandu for two to three months a year to spend time with the girls and to pursue philanthropic efforts in Nepal. There, personally and through GDF, Haley has funded the construction of a school, the renovation of an orphanage, the leasing of a group home for children in transition, and a culinary scholarship program for handicapped young women aging out of orphanages.

Veteran Nepali journalist Yubaraj Ghimire, a friend of Haley’s, lauds the chef’s generosity. “He knows being rich does not mean earning a lot and being a successful businessman,” says Ghimire. “Being rich and a good human being means being able to share what you have, and giving opportunities to others to grow in life.”

Ghimire points to a lesson that Haley says he learned from his mother, Georgiana Haley, who raised him and his four siblings on her own. “She taught me a lot about compassion and how important it is to be of service to others,” says Haley. “My mother always put other people first, and for the longest time it was us.”

When not traveling the world, Haley devotes time to community involvement at home. Since 2010 he has served as president of the Board of Directors of La Esperanza, which provides services to the Southern Delaware Hispanic population. Haley is also working with Delaware's Secretary of Agriculture Ed Kee to bring urban gardens, markets, and nutrition education programs to the state’s cities. He is helping to develop a culinary skills program for people who have been incarcerated, so they can transition back to society with a trade. For Haley, the theme tying these efforts together is his imperative to promote a cycle of self-esteem among those he helps.

At the center of Haley’s work is his belief in the centrality of food and the power of feeding people. He recalls cooking a meal for 80 children at a Nepalese orphanage as one of his greatest food experiences. “We had rice, turnips, and turnip greens. We had no salt, no pepper, no chile, no garlic, no oil, no butter. We had nothing but enough to feed these children one time that day. So we blanched the turnips in water, blanched the greens, and cooked the rice,” he says.

“It was probably one of the best meals I’ve ever had in my life. Eating with 80 hungry children who don’t care if they have foam and spun sugar and custom-made sea salts on their rice and turnips allows you to rethink your process on food. It was a huge day for me and probably one of the greatest lessons I’ve ever had in cooking, which brings back the art of simplicity and gratitude.” 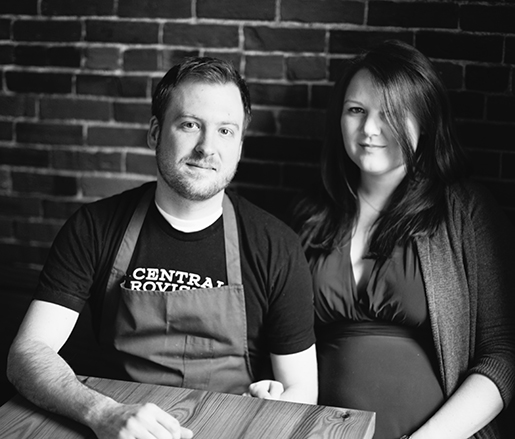