Celebrating Nominees, Honorees, and Looking to the Future

Tonight we celebrated the 2020 James Beard Award honorees and nominees in a live virtual event broadcast via Twitter from Chicago (watch it now ICYMI). The evening was emceed by Ji Suk Yi, a staple in local Chicago media and television for over 10 years. Yi played host to the broadcast from the show’s headquarters in Chicago as this year’s presenters and participants joined remotely.

James Beard Award–winning host Pati Jinich introduced the America’s Classics honorees, and the Lifetime Achievement Award was presented by musician and journalist Questlove to author, editor, and translator of 18 books, Jessica B. Harris. Alice Waters, who accepted the Design Icon Award for her restaurant Chez Panisse, also presented the Humanitarian of the Year honor to nonprofit organization Zero Foodprint.

Colleen Vincent, JBF vice president of community, spoke with 2019 Leadership Award winner Sean Sherman about leading change and diversity through food, and the recent announcement of the James Beard Foundation Food and Beverage Investment Fund for Black and Indigenous Americans.

Nominees also offered words of inspiration and support to their colleagues throughout the industry, providing a glimpse of hope and positivity from across the country. They detailed the way in which they have given back to their communities in recent months and how they are motivated to build back better than before.

To close the evening, Gail Simmons moderated a roundtable discussion with chefs Kwame Onwuachi, Tanya Holland, Beverly Kim, and Johnny Clark on the state of the restaurant industry, touching on the role of independent restaurants in local communities, challenges faced in recent months, the economics of running an independent restaurant, racial and gender inequity, and more. Below are a few highlights, and stay tuned to Beard Foundation channels for the full discussion:

There will be no James Beard Awards given in 2021 in the Restaurant and Chef, Media (Book, Broadcast Media and Journalism Awards), and Restaurant Design categories. The Foundation will not be accepting recommendations or submissions for the upcoming year. As the Foundation moves forward, it will be conducting a comprehensive internal and external review of the Awards systems to address any systemic bias and align the Awards with the Foundation’s mission of promoting sustainability, equity, and diversity in the restaurant industry. The Foundation is taking stock of how the Awards are administered, communicated, and presented to assure the Awards are open and accessible to all. Updates regarding the Awards will be posted regularly to jamesbeard.org/awards and on the Foundation’s social channels (@beardfoundation on Twitter and Instagram).

Everyone in this industry has worked long and hard, and we will continue to nurture your passion and honor your contributions to this community. Tonight we honor the nominees of the 2020 James Beard Awards, presented by CapitalOne.

Humanitarian of the Year
Zero Foodprint

Best Chefs (Presented by Capital One)

Through its Open for Good campaign, the Foundation is working to help the independent restaurant industry survive the COVID-19 crisis and come back stronger, more equitable, and more resilient. The Foundation’s vision is an industry in which everyone has an equal opportunity to thrive. Learn more about Open for Good. 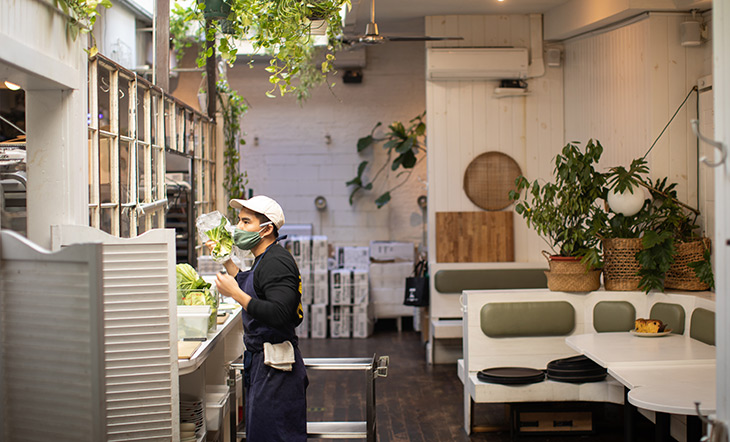