We are thrilled to announce the 21 participants in the 2021 Women’s Entrepreneurial Leadership (WEL) program, which aims to support women food industry entrepreneurs and restaurant owners in order to grow their careers and scale their businesses. In conjunction with Cornell University, this year’s WEL program will include sessions on negotiating, design thinking, business and financial models, funding your businesses, and more. In addition to live virtual sessions led by Cornell faculty from across the university, James Beard staff, and other subject matter expert facilitators, WEL students will also be able to select an elective from Cornell’s External Education program.

The 2021 class of Women’s Entrepreneurial Leadership are:

April Anderson knew at age nine that she wanted to be a baker and began making treats for her family on a regular basis. She started a home-based baking business in 2008, and in 2010, she attended Macomb Community College for Pastry Arts. In September 2013, April and her partner Michelle opened their first bakery in Detroit: Good Cakes and Bakes. April has baked for famous figures, including Aretha Franklin and Oprah Winfrey, and has been featured on The Today Show and given a TEDx Talk. April is also a 2018 James Beard Foundation Chef Boot Camp alum.

A founding partner of Bates Co. along with her husband Simon, Codi Bates has worn the hats of host, pastry chef, event manager, server, general manager, beverage director, and everything in between. Currently, Codi oversees the operations, accounts, and direction of each business. Codi feels passionate about the power of bringing people together around thoughtful food and drink to celebrate, support, educate, grow, and build community.

When Anzia Bennett was a child, she found that food was the quickest way to connect to community. While studying gender and economic development at college in Kingston, Jamaica, she spent most of her time in kitchens. After graduating, Anzia moved to Albuquerque and has worked in the nonprofit sector ever since. Founder and executive director of Three Sisters Kitchen, Anzia embodies the mission of using the power and love of local food to create economic opportunity, improve health, and bring communities together around the table.

Chef Kristi Brown officially spooned her way into the culinary world almost 31 years ago at a small café in downtown Seattle. A graduate of the Seattle Culinary Academy, Kristi founded That Brown Girl Catering in the Central District of Seattle in the mid-1990s. At the beginning of COVID-19, she launched a community kitchen named after her mantra, “Everybody Gotta Eat.” Recently, she opened COMMUNION Restaurant & Bar in Seattle.

Jeanne Cheng has always been passionate about clean, nutritious, and delicious food. After her son developed food sensitivities, she focused all of her knowledge into finding the best foods to nourish him. Noticing a need for easy, convenient, and healthy food, she opened Kye’s in 2014.

While studying at Auburn University, Christa Cotton helped her parents to open Thirteenth Colony Distilleries, Georgia's first legal distillery since Prohibition. After a stint in advertising in New Orleans, Christa purchased the El Guapo Bitters trademark. Specializing in zero-proof bitters, El Guapo Bitters has expanded into syrups and mixers and is Women’s Business Enterprise National Council (WBENC) certified. Christa is also a LEE Initiative mentor, a Les Dames d'Escoffier Legacy Award: Fine Spirits recipient, and a 2020 Tory Burch Foundation Fellow. She is currently in the process of opening a bitters brewery, the first of its kind in America.

Born in Guatemala, Sofia Deleon moved to the U.S. to pursue a degree in food industry management at Michigan State University. She then went on to earn her master’s degree in food marketing at Saint Joseph’s University in Philadelphia. After witnessing negativity towards Central American immigrants, Sofia opened El Merkury to showcase the foods and culture of the region. In 2021, Sofia opened a second location in Reading Terminal Market.

After 15 years of experience in media, distribution, and marketing, Crystal Diaz dedicated her efforts to work on projects related to her greatest passion: food. She co-founded PRoduce!, a digital marketplace that facilitates the delivery of local products to the consumer's door. Crystal is also involved with El Pretexto, a culinary farm lodge that houses an outdoor kitchen, farming garden, and a rural inn located in the Cayey, Puerto Rico.

Katharine Elder is executive chef and owner of Elderslie Farm. Founded in 2010, Elderslie Farm includes a breakfast café, fine dining restaurant, vegetable gardens, and a dairy and goat creamery. During the pandemic, Katharine helped to feed her community through Family Meal and Every Day Elderslie. Katharine is passionate about championing local sustainable food and hospitality.

Born and raised in Virginia, Jennifer Ferrebee’s love for the hospitality profession began when she started working as an event planner and caterer. Looking for fast but healthy options, Jennifer and her husband opened Verde in 2011. Today, the business has expanded to five locations across South Carolina. Currently, Jennifer oversees all operations, marketing, and executive decisions.

Born and raised in Mexico City, Fany Gerson studied cooking in Mexico and at the Culinary Institute of America. She went on to cook in Michelin three-starred restaurants in Spain and the U.S., including Eleven Madison Park in New York. After spending a year researching in Mexico, she released her first cookbook in 2009, My Sweet Mexico, which was nominated for a James Beard Award. In 2010, she started selling Mexican ice pops, or paletas, out of a street cart, which eventually became La Newyorkina. She has since opened two doughnut shops: Dough and Fan Fan Doughnuts.

Alex Graf is owner and pitmistress of ZZQ in Richmond, Virginia. Since 2018, ZZQ has received various accolades including National Barbecue All-Star by Food & Wine magazine and one of the top 33 Best Barbecue Joints in America by Thrillist.

Born in Seoul, Korea, Ji Hye Kim immigrated to the U.S. at 13. A University of Michigan graduate who started in hospital administration, Ji Hye switched to hospitality in 2008. After training at Zingerman’s and Rome Sustainable Food Project, she ran an Asian street food cart before opening MISS KIM. Ji Hye was a 2020 semifinalist for the James Beard Award for Best Chef Great Lakes, and is an alum of the James Beard Chefs Boot Camp for Policy Change and Food Lab Detroit’s Fellowship for Change in Food and Labor. Most recently, she was named Best New Chefs 2021 by Food & Wine magazine.

Before opening Vinatería in early 2013, Yvette Leeper-Bueno owned Leeper Kids, a clothing design/manufacturing business and children’s clothing boutique. Eventually her entrepreneurial spirit, love for good food, and devotion to the Harlem community led her to open Vinatería. Over the last eight years, Vinatería has been featured in the New York Times, Refinery29, Thrillist, Cherry Bombe, Domino, and has been awarded Award of Excellence from Wine Spectator five years in a row. Throughout the pandemic, Vinatería partnered with World Central Kitchen, serving more than 20,000 meals to medical workers and the food insecure.

Raised in Russia, Natalia Levey moved to the U.S. to enroll in culinary school in New York. While studying and working in the industry, Natalia became sick and took time off to care of herself and her family. Adapting the motto, “food is medicine,” she returned to cooking with a focus on holistic health and culinary nutrition. She has since formed Hi Hospitality Group, a multi-concept restaurant company which includes Speaks Clam Bar, Kojo, and the upcoming Central Park St Pete Food Hall. In 2021, she was honored as a top entrepreneur by Business Observer.

Micheline Mendelsohn is a fourth-generation restaurateur. She currently works as the deputy CEO of Sunnyside Restaurant Group and manages franchises and corporate stores in Washington, D.C.

Kwini Reed started her career in the entertainment industry, singing and writing music for films and television shows. She transitioned out of the industry and began working in accounting for small businesses. There she met her husband, Michael Reed, owner and executive chef of Poppy + Rose and Poppy & Seed. When Michael had the opportunity to buy out his business partners, Kwini decided to join. Today, she manages accounting and front of house responsibilities at their restaurants.

Jamila Ross began her hospitality career at young age working at restaurants in New York’s Hudson Valley. She went on to attend the Culinary Institute of America in Hyde Park, and continued her education at Johnson & Wales University studying hospitality management. She has worked under a number of chefs, including José Andrés and Peter Kelly, and hospitality groups such as SBE Hospitality, Pubbelly Group, and Starwood Marriott. In 2013, she was named one of Collaborate Business Magazine’s “30 under 30” professionals, and in 2020, she was awarded StarChefs' Community Award in Miami.

One of Annie Shi’s most formative moments was sitting around the dinner table and sharing a meal with her family. While working at J.P. Morgan, she started taking courses on restaurant operations at New York State University. When she relocated to London for work, she staged at restaurants over the weekend and began hosting pop-ups with friends. In 2015, Annie and her business partners moved to New York to start a career in the industry and opened King in 2016.

Christy Vega is a third-generation restaurateur. In the 1930's, her grandparents and father immigrated from Tijuana, Mexico to Los Angeles and opened the first Mexican restaurant on Olvera Street. Her father went on to open Casa Vega in 1956, and Christy now serves as the company’s president. Casa Vega is 100-percent family- and female-owned.

Find out more about our Women’s Entrepreneurial Leadership program. 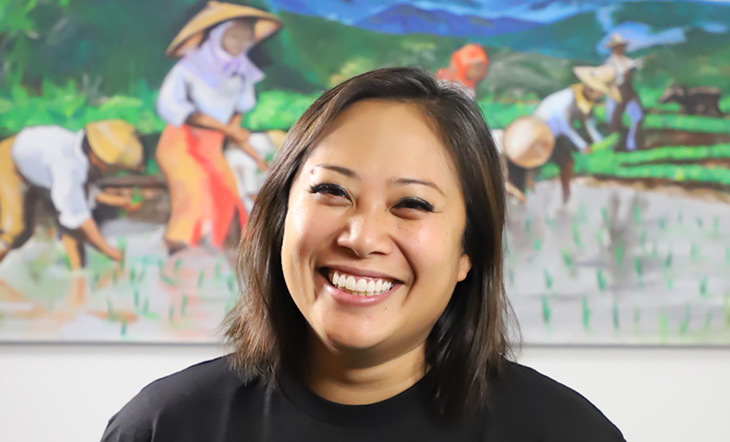 How This First Time Restaurateur is Feeding Seattle