Today we're excited to announce a perennial Beard-Award favorite: the America's Classics winners! This honor is given to regional establishments, often family-owned, that are treasured for their quality food, local character, and lasting appeal. Read on to learn more about our 2016 America's Classics. The winners will receive their medallions at the James Beard Awards Gala at Lyric Opera of Chicago on Monday, May 2.

This restaurant, with its rows of floral print booths, is a bedrock institution in Dearborn, Michigan, and one of the nation’s most welcoming introductions to the pleasures of Lebanese cuisine. Khalil Ammar, Zaki Hashem, and their families started this community-minded spot in 1989. Unfailingly warm servers explain the fine points of maza (a spread of dishes that might include falafel and hummus) and define the differences between fattoush and Lebanese salad. The owners also run a halal butcher nearby. Accordingly, Al Ameer is the place to savor sujuk sausage, vivid with paprika and cumin, or a feast of tender shredded lamb rich with almonds, yogurt, and rice.

Brooks' began in 1912, when John McClelland and his wife founded a chicken farm in upstate New York. A catering business followed, then a drive-in, then, in 1961, Brooks' BBQ. Their grandson is at the helm today. The rust-and-toffee interior features rooster-print wallpaper, a scalloped lunch counter, and state-themed paper placemats that detail the entirety of the “Brooks’ BBQ Campus.” The complex includes a banquet center, gift store, children’s park, picnic area, and a sauce bottling plant. Cooked on a 38-foot indoor charcoal pit, the barbecue chicken emerges with blistered skin and backyard flavor that goes bone-deep. A spiced apple ring, dyed deep garnet, tops each bird. Set on a backroad that cuts into the Catskills, Brooks' is a memory-making place for families driving to and from the mountains.

This whitewashed cottage with sky-blue trim opened in 1930 as a drive-in. The staff still deliver some meals curbside to this day, and they remain cheerful curators of community, working the soda-fountain counter in a room lined with midcentury-style wood paneling. The food does the roadside genre proud. Most everyone comes for the crisp, flattop-griddled burgers. The masterpiece is the nut burger, crowned with crushed peanuts mixed into mayonnaise; the topping melds with sliced pickles, tomatoes, and onions righteously. Served with homemade onion rings and a strawberry milkshake made with house-churned ice cream, such a meal is blissful evocation of Montana’s culinary culture.

Tyrone Bully and his father, both trained as masons, built this mansard-roofed restaurant with their own hands. Pride of place goes to a portrait of Civil Rights Movement martyr Medgar Evers. Bully’s opened as a snack shop. Nearby factory workers flocked there for cold cut sandwiches. Regulars today include police officers, city council members, state legislators, musicians who record at a nearby studio. Folks from all walks of life arrive for oxtails, neckbones, macaroni and cheese, rice and gravy, and sweet potatoes.Tyrone Bully arrives at six each morning and stays until he locks the doors at night. Bully’s serves three different greens daily—typically collards, turnips, and mustards—which cooks strip, wash, and simmer in pork-infused broth. This is back-of-the-range cooking without peer.

Florence and Arturo Jaramillo envisioned this restaurant as a living tribute to the heritage of New Mexico, a way to honor the land and the culture. Arturo Jaramillo is a direct descendant of the first settlers to the Chimayó Valley in the late 1600s, and the hacienda was the home of his grandparents. The menu has expanded over the years. At the core are peerless regional dishes like carne adovada, tamales, posole, pinto beans, sopaipillas, flan, and natillas. The village of Chimayó is celebrated for its particular cultivar of red chile. Ristras of those chiles dangle decoratively from the eaves of the hacienda, a reminder of the import of local goods and local traditions.

Want to stay informed about the James Beard Awards and other Foundation news? Sign up for Beard Bites, our weekly digital newsletter. 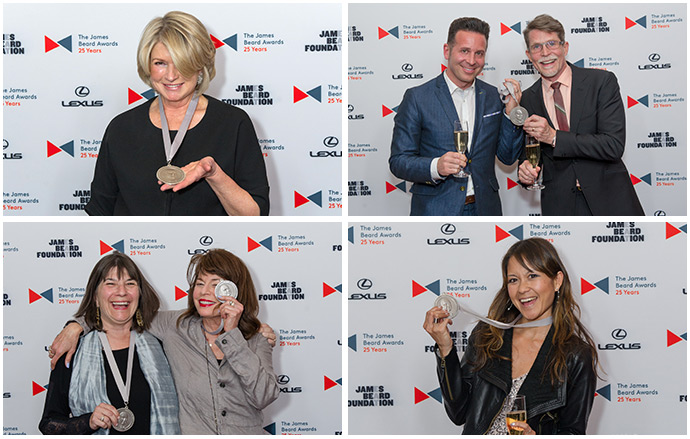