On the Menu: Week of March 9 Monday, March 9, 7:00 P.M.
Berkshires' First Taste of Spring
Known as much for its rich culinary culture as for its glorious highlands, the Berkshires boasts some of the country’s best farm-to-table restaurants, including Bo Peabody's and Nancy Thomas’s Allium and Mezze. Join us as we toast to spring over a stunning early-season menu that will showcase the area’s top toques.

Tuesday, March 10, 7:00 P.M.
New York Icon, Reinvented
After three decades at his trailblazing Chanterelle, JBF Award winner David Waltuck has embarked on a new chapter at the critically acclaimed élan. Come see what this iconic New York chef has been up to when he brings a menu of modern, whimsical fare to the Beard House.

Wednesday, March 11, 7:00 P.M.
Along the Spice Route
With accolades pouring in from the likes of GQ and Eater, the Bombay Club’s refined regional cuisine has clearly won fans far beyond its Beltway home. Join us for an elegant culinary tour across the Subcontinent, and discover the seductive flavors that have been transporting the Washington elite to the height of India’s British Raj for over two decades.

Thursday, March 12, 7:00 P.M.
One Cool Cat
To celebrate its 15th anniversary, Jimmy Bradley’s longtime Chelsea favorite the Red Cat will showcase its new team at the Beard House: Michael Cooperman, whose impressive pedigree includes Le Bernardin and the Modern, and Sharon Vanegas, formerly of Gato. Join the cool kids at the Beard House for a taste of the Cat!

Friday, March 13, 7:00 P.M.
Matt's Coastal Kitchen Legacy
We’ll raise a glass to the late chef, restaurateur, and philanthropist Matt Haley, recipient of the 2014 JBF Humanitarian of the Year award. This beautiful dinner crafted by Doug Ruley and his team will be a celebration of Haley’s restaurants and will feature the “farmer meets fisherman” cooking for which he was known. 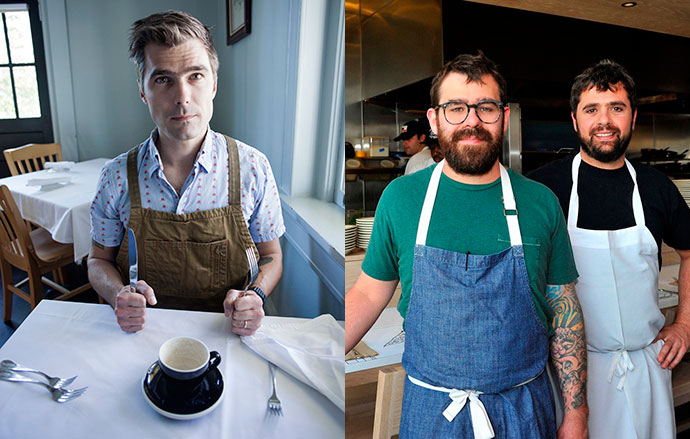