5 stories from across the U.S. of resilience, crisis, and hope

In late March, we established the James Beard Foundation Food and Beverage Industry Relief Fund to provide direct financial assistance to small, independent businesses around the country. Since then, the fund has distributed $4.7 million to coffee shops, diners, cocktail bars, barbecue joints, chocolatiers, and fine-dining spots from coast to coast. As part of our ongoing commitment to stabilizing and ensuring the longevity of the industry, we'll be sharing stories from fund recipients. Below, you'll find hard work and heartbreak, compassion and creativity, and proof positive that these businesses are cornerstones of their community that need to be #openforgood.

Omi's Coffee Shop in South Portland, Maine, is a grassroots neighborhood coffee shop owned and operated by Gail Bruzgo, her daughter Katie Bruzgo, and Katie’s wife Naomi Hall. Omi’s serves “hand-crafted breakfasts” using all local ingredients for their homemade pop-tarts, granolas, and breads, and sourcing from Maine producers for everything else. Situated on the way to the Portland Head Lighthouse, the coffee shop relies on the influx of tourists in the summer to make up most of their annual revenue. In early March, Omi’s had made it through most of their slow winter season and was building momentum when the danger of coronavirus made it clear that it wasn’t safe for their staff (some of whom were immunocompromised) to continue to come in.

Gail, Katie, and Naomi are now the only staff, running a Saturday morning curbside delivery service featuring cold brew, their handmade bottled coffee syrups, and quiches from a local bakery.

The owners plan to use the funds to pay their suppliers, from local farms and markets to their paper supplier. They feel the grant is especially helpful because of how far-reaching it will be. Omi’s primarily relies on local businesses, so the money from this grant will flow directly into their community.

Amanda and Brian Light were planning to celebrate the second anniversary of their restaurant Ronin in May, when the pandemic forced them pivot to a takeout only model. “We had to furlough most of our team, who are like our family, via Zoom,” Amanda said, reducing their staff of 42 to just two front-of-house employees and eight kitchen staff, some of whom split their time between the restaurant and the Light’s 15-acre farm. While the farm is normally a source of fresh produce for Ronin’s menu, the Lights have also launched a CSA for the community, which sold out in under two days.

Amanda and Brian sought whatever funding they could to keep their doors open—PPP, EIDL, local and state grants—but nothing has come through yet. “We are tremendously grateful for the James Beard Foundation Relief Fund,” Amanda explained. “Without this, we would have been like so many other restaurant businesses around the country with shuttered doors and dashed dreams.” The Lights plan to use the grant from JBF to pay their seafood supplier in Houston, cover their utility bills, and help with payroll.

Sandra Cordero, owner of Gasolina Café in Woodland Hills, California, was hoping to start giving her staff health benefits and paying herself a salary by April 1. The restaurant had just moved to a new location three times the size of the original eatery in November 2019, shifting from counter service to a dine-in model that required Cordero to increase her team by a third. All of those plans went sideways when the state’s stay-at-home orders went into effect. Cordero switched to takeout and delivery immediately, determined to stay open—she felt that if they closed, they might never come back. The business had been on the edge before, when a fire ravaged Gasolina’s nascent second location just a week after it had opened. Recovering from that made Cordero more determined to keep the doors open during the pandemic.

So far Cordero has been able to keep five members of her staff employed, through a combination of takeout/delivery business and a partnership with the nonprofit Off Their Plate. Through Off Their Plate, Gasolina has provided 1200 meals for hospital workers. Cordero plans to use the money from the Industry Relief fund to pay the restaurant’s vendors and the small farms that supply its produce. “We’re just trying to not get behind,” she said. “We don’t want to get into a deep hole of debt that would be incredibly hard to get out of. The grant gives hope and strength to carry on.”

In October of 1981, just five months after emigrating from South Korea, Hyangmi Yi started working at a restaurant in her new hometown of Albuquerque. In 2005, the original owner retired, and Hyangmi took over AmerAsia/SumoSushi, just one of two spots in the city offering dim sum to hungry New Mexicans. Before the coronavirus pandemic, the 3,500-square-foot restaurant in Albuquerque’s downtown sat 120, feeding its “Americanized dim sum” to three generations of loyal customers. “I love people,” Yi said. “My favorite thing is to see regular customers, it makes me feel so good.“

Even before stay-at-home orders forced them to switch to takeout only, Yi was going through a difficult transition. Last June she was diagnosed with breast cancer and has been undergoing chemotherapy, while still clocking 80-hour work weeks at AmerAsia and preparing her daughter to take over. Yi says the Relief grant will make a challenging time a little less painful. The funds will go towards payroll, which Yi hopes will help her avoid laying off any more staff. “I don’t want to let any more employees go,” she said. “I had to keep my chefs because a lot of them have been working ten years.”

“It was overwhelming when I received the check,” she continued. “I was crying for half the day. You guys are helping me that much.”

One of Kyle Hayes’s earliest jobs was working as a dishwasher at Gram’s Diner in Adams, New York. Eventually, he moved on to the restaurant’s kitchen, a place he found himself returning to year after year, even picking up shifts when he was home from college on breaks. After a stint in New York City, Hayes learned there was an opportunity to buy the diner, and he and his business partner jumped at the chance to own and modernize Gram’s. Six years in, Hayes felt like they were gaining momentum, and he loved seeing the community continue to come together at an institution that had been a part of Adams for decades.

When the stay-at-home orders went into effect, Hayes and his partner struggled with what to do. "The first couple weeks were really tough with all the decisions that had to be made—do we stay open, do we lay people off?” Hayes explained. “People reached out and said, ‘Don’t worry. You’ll be back and we will be here when you are back.’ Our community has really rallied around the small businesses.” Ultimately, Hayes had to lay off all 13 of their employees, although he and his partner still talk to the staff members daily.

Even with all of the support from the community (some of their regular customers have offered to volunteer as staff when they re-open), Hayes wasn’t sure about the future of Gram’s until receiving the grant from the James Beard Foundation relief fund. He says the money will allow them to re-open—to re-hire staff, manage payroll, place food orders, and more. “For us to have a grant from James Beard, it throws out a beacon of help for us to make sure we have a restaurant to come back to,” Hayes said. “My team has a restaurant that they can come back to—so they can see their team and the customers that they really miss. It means more to me than the money itself. To have that atmosphere stay alive for our little town is a godsend.”

Learn more about our efforts to help independent restaurants #openforgood. 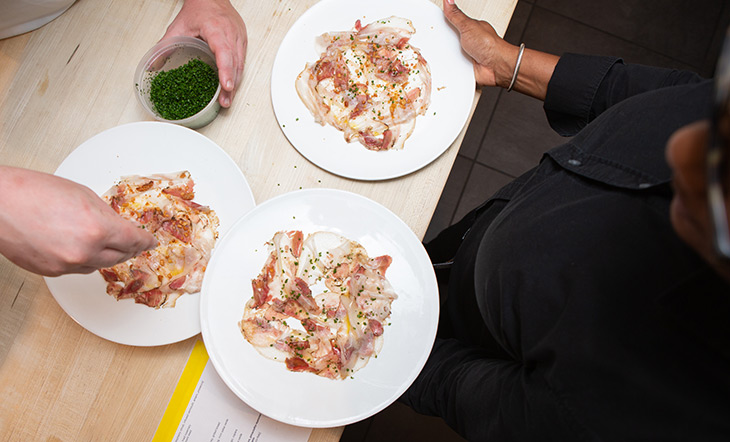 Get the Most Out of the CARES Act