Tastebud: An Encore for the Intermezzo Italian for “interval,” an intermezzo is an icy interlude, a small dish to be consumed between courses, rejuvenating the palate and prepping it for the rest of the meal. Also known as palate cleansers, intermezzi tend to be sorbets, granitas, or other icy treats that are usually flavored with fruit, especially highly acidic citrus. While the fat and salt of previous courses deaden your taste buds, acidity perks them up; following a couple of savory dishes with a spoonful of lemon sorbet is like hitting a “reset” button on your tongue. Auguste Escoffier encouraged chefs to serve sorbets or other ices between courses, which helped popularize the intermezzo in 19th-century Europe. (The French legend himself was fond of Punch Romaine, an alcoholic lemon–orange ice that refreshed the tongues of diners aboard the Titanic.)

Over the past year intermezzi have popped up on an unusually high number of Beard House menus. We've seen a wide range of flavors and formats: Coyote Cafe’s Eric DiStefano mixed up a muskmelon frappé, Anthony Goncalves served playful orange and vanilla dippin' dots, and the Dos Caminos crew sent out a prickly pear raspado, the snow cone’s Mexican relative. 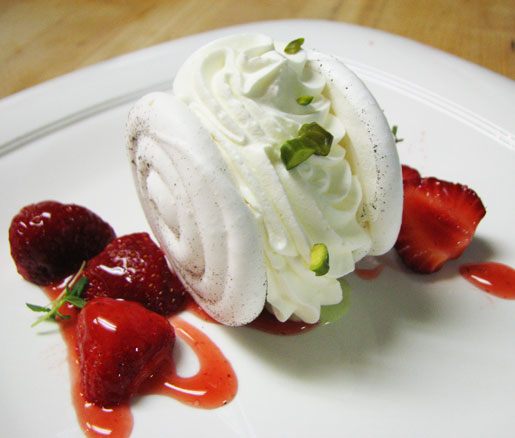