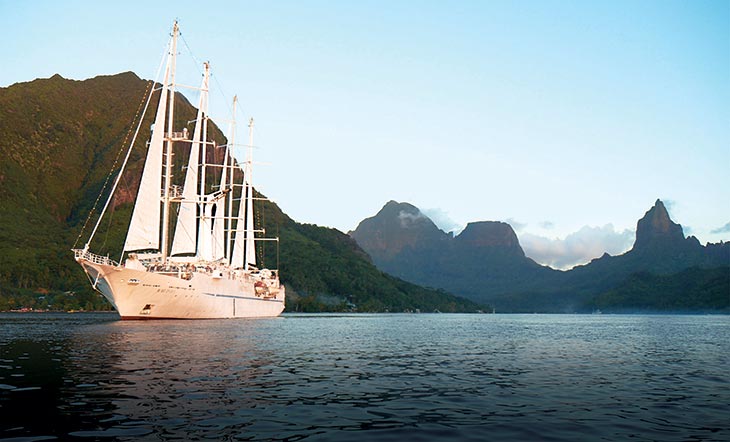 We are proud to continue our partnership with Windstar Cruises, whose fleet of small luxury ships are known for their unique voyages and intimate experiences. Together we’ve created the James Beard Collection, a series of food-themed itineraries hosted by James Beard Foundation-recognized chefs that will immerse guests in epicurean adventures, bringing together the best of travel and cuisine from around the globe.

James Beard Collection voyages will feature nightly dishes curated by the headlining chef, who will also perform cooking demonstrations, interact with guests, and lead off-ship excursions to local markets and other sights.

An 8-day cruise exploring the jewels of the Rivieras, from Rome to Monte Carlo to Barcelona, and more.

Executive Chef Jamie Leeds of JL Restaurant Group is one of Washington’s most highly recognized chefs and restaurateurs due to her wildly successful restaurants, prominent role in the community, and over 30 years of inspiring culinary experience in New York and Washington, DC. In May 2005, she opened her first Hank’s Oyster Bar serving what she termed “Urban Beach Food.” Since its’ opening, Hank’s Oyster Bar has been praised by national and local publications, such as Gourmet, Bon Appetit, Food & Wine, The Washington Post, and many more. In 2007, Jamie opened her second Hank’s Oyster Bar in Alexandria, Virginia. Her third Oyster Bar opened in 2012 near Eastern Market. Hank’s Oyster Bar on the Wharf, the fourth and largest location, opened in October 2017. She expanded the Hank’s brand in 2016, with the opening of Hank’s Pasta Bar and Hank’s Cocktail Bar. Following the success of all six restaurants, JL Restaurant Group was formed. She has received numerous awards and nominations including in both 2008 and 2014, when Hank’s won the coveted and publicly voted RAMMY for “Best Neighborhood Restaurant.”

With over 28 years of experience Jeff has worked in restaurants ranging from corporate chains to family-owned, and from casual to fine dining. Jeff joined the JL Restaurant Group in 2005. He quickly became the assistant manager, then General Manager of Hank’s Oyster Bar in Old Town Alexandria in 2007. There, Jeff worked closely with Chef and Restaurateur Jamie Leeds to develop a thoughtful and concise wine program. He was promoted in 2008 to General Manager of the flagship Dupont Circle location and in 2015, Jeff was asked to join the corporate operations team focusing upon training and development, of the now hundreds of employees of the company. In his spare time, Jeff continues to explore his love for wine with extensive travel to lesser known wine growing regions like Montenegro and his personal favorite, Croatia.

This 10-day cruise provides a cultural and culinary tour of the west coast’s most alluring port cities, including Seattle, San Francisco, Portland, and Vancouver.

Growing up in San Francisco, Duskie began cooking at the age of five in her EZ-Bake oven. She is a graduate of Brown University and known for being a fierce competitor on Food Network’s The Next Iron Chef. Duskie Estes and John Stewart opened zazu kitchen + farm in 2001. They are committed to buying from local farmers and farming themselves, raising their own rabbits, ducks, chickens, goats, sheep, and pigs. Duskie and John moved to Sonoma County from Seattle where Duskie was the chef of Palace Kitchen and voted City Search’s Seattle Best Chef in 2000. Under her leadership, Palace Kitchen was rated by Gourmet magazine as one of the top 20 restaurants in the country in 2000. She was coauthor on Tom Douglas’s Seattle Kitchen, which received the James Beard Award in 2001. Zazu has been recommended in the San Francisco Michelin Guide 2008-2018.  Duskie and John were on the cover of Wine Spectator, received the Star Chefs’ Sustainability Award in 2009, and were crowned King & Queen of Pork at Aspen Food&Wine, 2011.

Michael Metzger has been an active member in the hospitality business since his days at Miami University when he worked for Chef Alan Royer whose restaurant High St. Grill was nominated for the James Beard “Best New Restaurant of the Midwest.” In the following years, Michael dedicated his time in the US Virgin Islands to develop his skills on the mixology front, assisted with farming the first bio-dynamically planted vineyard in Argentina. Back in New York City, he managed a million dollar cellar for Vic & Anthony’s Steakhouse as Wine Director and Head Sommelier where his efforts were acknowledged by the Wine Spectator with a “Best of Excellence” award in 2013. Michael currently spends his time in New York City working for Distinguished Vineyards & Wine Partners and the James Beard Foundation’s Impact Program as their Sustainable Wine Partner.

A 9-day cruise surveying the shores of Italy, Croatia, and Montenegro, featuring the romance of Venice, the majesty of Dubrovnik’s medieval walls, the history of Split, and much more.

A native of Brazil, Cancelli originally got his start in the restaurant industry as a means of supporting himself and his theater aspirations.  After years of work in fine dining restaurants, Cancelli took a position at Swift and Sons, moving up through the ranks to become the Area Wine Director for the entire Boka Group, overseeing the wine programs at Swift & Sons, Momotaro, Bellemore and charged with the creation of the wine program at Cira, the upcoming new restaurant in the Huxton Hotel.   He is a Certified Sommelier by the Court of Master Sommeliers, has developed award-winning wine lists for every restaurant he’s worked for, including a Best of Award of Excellence Award for Swift & Sons.

A 10-day cruise providing a cultural and culinary tour of the west coast’s most alluring port cities, including Seattle, San Francisco, Portland, and Vancouver.

Explore the best of Alaska’s natural and cultural wonders on this 11-day cruise that will take you from glaciers to fjords to Russian cathedrals and First Nations totems.

Let your taste buds be your guide on this culinary and historical tour of coastal Europe, spanning 10 days and featuring stops in Bordeaux, the Loire Valley, Basque country, Porto, and more.