Ten years after Hurricane Katrina struck New Orleans, we are honored to celebrate the city’s resilience with the fabled Brennan family at an exclusive dinner later this month at the Beard House. With a menu devoted to the renowned seafood of the South, host Ralph Brennan and his team of world-class chefs will bring their crave-worthy combination of historic opulence and modern techniques up North to the Big Apple. As our excitement builds for their Creole cooking, we spoke to the chefs about their inspiration behind this dinner, their guilty-pleasure foods (think sweets), and their top places to chow down in the Crescent City.

SM: Paul Inveen and Maureen Pothier, chef-owners of the Blue Point Oyster Bar in Providence, Rhode Island. I have always admired their process in composing dishes and how they’re not afraid to push the envelope and introduce new and interesting items to the menu. Paul won consecutive Wine Spectator Grand Awards so they also introduced me to the wonderful world of wine.

MU: Peter Uddo, the successful restaurateur and chef who also happens to be my brother.

AK: Besides my grandmothers who both knew their way around a kitchen, Danny Trace. He gave me my real first shot and I’m very thankful for that. He also taught me how to have a presence in the kitchen and to cook from the heart.

AK: The inspiration for my dish is Louisiana blue crab. It's some of the best crab on the planet and it's great in any form.

SM: Frog's leg croquette. It's a fun hors d'oeuvre with a crispy texture and is so easy to eat without thinking, "I'm eating frog's legs!" SR: Anything with toffee.

AK: Doughnuts of any kind, but specifically beignets.

BG: I have a love-hate relationship with sour gummy candies.

SR: The Catbird Seat in Nashville in 2013. The food there has such a natural simplicity to it but is incredibly flavorful.

AK: The last great meal I had was at Le Bernardin. The flavors and freshness were amazing.

SM: My family was visiting from Providence recently and my mother made all of my favorites: baked eggplant, stuffed artichokes, chicken "candy" wings, pasta...

MU: I recently had a great porterhouse steak from Charlie's Steak House in New Orleans.

BG: The last great meal I had was a crawfish boil on Memorial Day at my parent’s house with all their children and grandchildren.

If you could cook one meal for any person (historical, famous, living, or dead), who would it be and what would you serve them?

SR: My mother—I would serve her Oysters Rockefeller "deconstructed," because she loved the original so much. I would like her to try my version of it.

AK: I would love to cook a meal for my grandmothers. I would serve them one of the dishes we would cook together when I was young.

SM: My deceased grandparents. I would love to cook for them the way they cooked for me. They’ve really implanted great food memories in me and I’ve realized how influential they were. It’s one of the reasons I decided to become a chef. I would serve New England seafood (like fish, clams, and mussels), squid with pasta, garden vegetable dishes with fresh herbs, tomatoes, eggplant, zucchini, and greens. Crunchy Italian bread with olive oil to accompany some dry-cured meats and cheeses. It would be a feast with the family. It would be nice to have an opportunity to return the favor.

MU: FDR and I’d let him choose the menu.

BG: I would like to cook for my wife. Although I can do that most days of the week, I’m limited in time and money. No expense would be spared and only my skill and creativity would limit me. I would also need an assistant.

AK: New Orleans has become such a great food town and there are some really great places. An under-the-radar restaurant is Cody and Samantha Carroll’s Sac-A-Lait (peep their upcoming Beard House dinner menu here). For a quick bite, I like Parkway Bakery for a po’ boy. Also Brennan's on Royal Street is the best place for brunch.

MU: Mother's for the debris and grits.

AK: My parents always told me to believe in myself.

SM: My dad always said, "If you work hard, good things will come."

BG: The words I live by are, "stay positive." 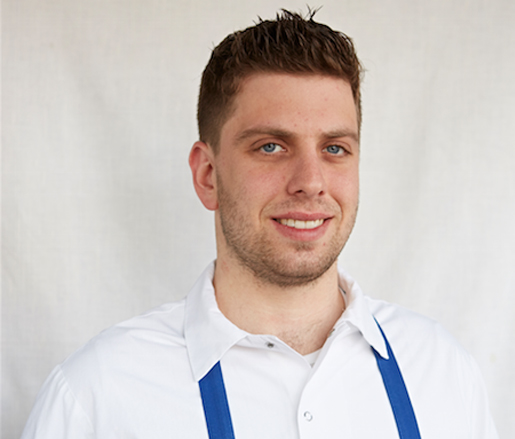