The Art of Cooking Outdoors

In his iconic tome, Beard on Food, our namesake wrote prolific prose on a vast landscape of culinary topics, from a lesson in chicken anatomy to his six essential herbs to the pleasures of cooking al fresco—a timeless primer to kick off your long-awaited grilling season, which we share with you below. Happy summer!

Walk down the streets of any town, large or small, on a summer evening when dinner is cooking in many a patio and back garden, and the smell of the scented smoke that wafts on the air will give you an idea of how good the various outdoor chefs are. While some are grilling their meat to juicy, mouth-watering tenderness, others are merely shrinking it to a charred hard hunk that would be shunned by anyone with a decent palate.

Grilling, broiling, barbecuing—whatever you want to call it—is an art, not just a matter of building a pyre and throwing on a piece of meat as a sacrifice to the gods of the stomach. For while barbecuing is a very old and primitive way of cooking, it is also one of the most appetizing methods of dealing with meat known to man, and it deserves to be done with some semblance of technique, accuracy, and care.

One of the greatest mistakes is adding too much fuel. Charcoal briquets, which have become the almost universal fuel for outdoor cooking in this country, are efficient and simple to use, but all too few people realize that they give the best results when used economically. If you have a little hibachi, you don’t really need more than 12 to 14 briquets (or at the very most 20 to 24) to cook a normal amount of meat for two or three. Even with the big-wheeled grills that can do enough for a large family, certainly 30 to 40 briquets will suffice. If you are spit-roasting a turkey, a very large beef roast, a suckling pig, or a whole baby lamb, all of which take longer to cook, you may need more than 40 or 45 briquets, but the extra amount may be added later on as required. Always start your fire in ample time to let the coals form and the briquets burn down to the point where they are veiled in a lovely white ash and exude an even heat. I build my briquets in a pyramid, and if I don’t have an electric starter, I use briquets that have been soaked in some form of liquid fuel. I let them burn up, and as they catch, I spread them out over the fire bed, touching, which makes for better coals than if you let them burn up in the pyramid and try to spread them out later.

The secret of good grilling is to have an even distribution of heat. If the briquets are allowed to form the right kind of bed of heated coals and ash, the whole grill will be evenly heated with a surface temperature between 350 and 375°F, the ideal medium for cooking. Four inches below the grill, midway between it and the coals, the temperature will be around 600°F, and if you were to check in the coals themselves with a pyrometer, which measures the heat in a fire, you might find it was as much as 1,200 to 1,400°F. This is the perfect distribution of heat. From the fiery coals to the midway point the temperature cools off so that by the time the heat reaches the grilling surface it cooks the food steadily and well instead of charring it to a black and horrible mess that is still almost cold inside when you cut into it.

For properly cooked meat, time the grilling. First measure the meat. If a steak is 2 inches thick, give it 10 minutes per side if you like it very rare. Let it brown gradually on one side, turn, and cook until browned on the other. If you want to char the outside, let it cook to the point of doneness you like, then increase the heat either by bringing up the firebox or by adding more briquets on the outside of the fire, letting them catch and then building them up under the meat so the heat increases all at once. Turn quickly to char both sides.

While we all like a good, thick, grilled steak, don’t overlook some of the less expensive cuts like flank or skirt steak, which grill quickly and well. Another of my favorites is leg of lamb, boned and butterflied, or spread flat, then grilled like a thick steak after it has been salted and peppered and given some garlic and perhaps rosemary. I also like a succulent pork steak, cut ¾- to 1-inch thick from the leg with the round bone in. I rub it well with prepared mustard and brush it while it grills with just enough honey and additional mustard to give it a nice crispy glaze—smoked ham steaks can be split and flattened slightly with a blow from the cleaver and grilled—first bone-side-down, then on the skin side. Watch them carefully to see that the fat that drips into the coals doesn’t create a fire that will scorch the delicate skin. If it does drip, there are several things you can do to take care of the flaring up, such as quenching the flames with a spray gun filled with water, but I prefer to put a dripping pan—either a narrow ice-cube tray or a double fold of aluminum foil—in the center of the firebox and push the coals around it. If you are dealing with meat, you would, of course, trim off most of the excess fat first, which isn’t always possible with poultry.

That’s just about all there is to outdoor cooking—a good fire, good coals, and patience, for this is one endeavor in which patience, rather than speed, should be your watchword. 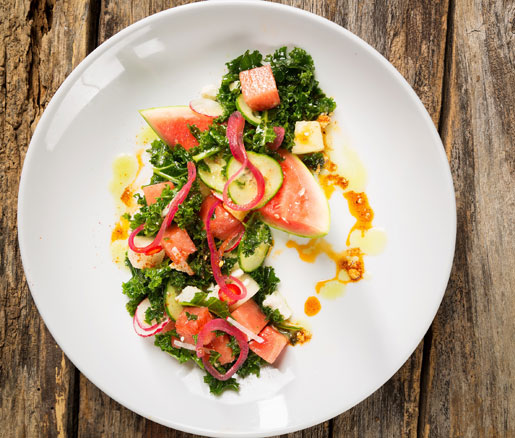