For 2016 Rising Star Chef of the Year nominee Daniela Soto-Innes, cooking is all about joy. The chef de cuisine at New York City’s masa mecca Cosme (a 2015 JBF Award nominee) is well-known for greeting her staff with hugs, and turning up the radio when it’s time to get down to prep. As it turns out, such joie de vivre is a recipe for success, as critics and diners alike have packed Cosme’s tables since its opening day. We spoke with Soto-Innes about drawing culinary inspiration from her childhood, how tortillas can be a game-changer for the Mexican restaurant scene, and where she’s headed when she visits Chicago for the Beard Awards in May.

JBF: You got your first job in the food industry at the Woodlands Waterway Marriott when you were 15 years old, and continued to work for the company for the next several years. How did working for an international hotel chain shape your culinary perspective during this early period in your life?

Daniela Soto-Innes: I started at the Marriott cutting strawberry tops and washing lettuce when I was 15 years old. I was lucky to work in a hotel with a very inspiring executive chef and a wonderful chef de cuisine who both treated me as an equal. They didn’t care that I was a Mexican girl with no cooking experience in an American kitchen that was dominated by men. They knew that I was passionate and eager to learn, and those were the two qualities they valued the most. Looking back, I realize how important the leadership of that kitchen was in forming the chef I am today. I definitely learned a lot of technical basics at that job, but the kitchen community was what shaped my culinary perspective the most. The kitchen adopted me as part of the family from day one, and encouraged me to enter into cooking competitions, plan my culinary career, and become a leader myself. If it hadn’t been for their willingness to teach a really green cook with an appetite for learning and respect for hard work, who knows where I would have ended up! I do my best to honor this opportunity by working as hard for our cooks and staff as that team did for me.

JBF: Two of Cosme’s most popular dishes are the duck carnitas tacos, and the corn husk meringue. Can you talk about your inspiration behind those dishes, and the process of developing them? How did your background in pastry and your time working with JBF Award winner Chris Shepherd at Underbelly inform these dishes?

DSI: When Cosme first opened, I felt like it needed the same warmth that Mexico and Texas share. We had been working like crazy to get the restaurant ready for opening, and I decided to treat our staff to a few ducks for family meal (family meal is very important to us, and we work really hard to make it beautiful and delicious at Cosme, just like I learned at Underbelly). We all think of our childhoods and our upbringings in the creation of new dishes, and I wanted to show my team how my mom made pork carnitas—with Mexican Coca-Cola, condensed and evaporated milk, fat, oranges, and very slow cooking. I had never done it with duck before, but I thought it would make a delicious version of this classic Mexican dish. Chef Enrique’s wife, Allegra, came to Cosme for dinner later that night and we had an extra duck from family meal. She had eaten everything on the menu before, and I wanted to send her something new. I thought, “Why not? Let’s go for it and serve them the whole duck,” and I sent it out on a burning hot cast-iron pan. 20 minutes after the duck hit the table, one of the managers said, "Enrique wants to talk to you." I was totally nervous. I went upstairs and was relieved when Allegra told me that it was the best dish she had all night! Ever since then, we haven’t been able to take it off the menu.

The corn husk meringue is a very special dessert for me. Growing up, my parents worked hard to give my sisters and me the best that they could. They were always very busy, and sometimes my father would have to pick us up very late from school. To treat us, he would sometimes bring us meringues stuffed with whipped cream. We would come back home so happy, showing my mother the huge meringues Dad gave us. They were bigger than my hand! My mom wouldn’t let us eat the meringues before dinner and made us eat something "healthy" before the meringues. She used to make us a sweet corn soup (I don’t think she realized that it was also high in sugar!). After the soup, we’d get to eat our meringues. We were the happiest kids on earth. Ever since, the idea of a meringue has always reminded me of those moments. I wanted to try to make people feel the same way I felt when we were surprised with those meringues.

Chef Chris was someone who opened my eyes as a cook, and he trusted me so much to give me freedom to create dishes like these. He’d support any idea that might seem crazy to lots of people, as long as I had the willingness to give it a try. He really encouraged creativity and was so good at playing with traditional dishes and creating something totally new. Probably without realizing it, Chris taught me to be even more proud of my culture than I already was, and that my personal experiences could be channeled into something new and delicious. In a lot of ways, he really prepared me to embrace this opportunity to work with Enrique, where so much of our work comes out of playing with traditions and our childhoods. I’m very grateful to have worked under such a supportive and talented chef.

JBF: You’re known for the joy you bring to the kitchen. Can you talk more about that and what makes the kitchen environment at Cosme special?

DSI: My great-grandma always told me that if I didn’t smile while baking, the cake was always going to come out raw. My grandma would always tell me that the reason why my rice was crunchy or overcooked was because I didn’t have patience, or because I was upset when I cooked it. My mom told me once that my cookies had burnt because I was sad when I cooked them after my sisters had been teasing me. They each taught me that emotions, good and bad, affect your cooking. So often you hear that kitchens are crazy places to work and that intimidation is normal, but I want to change the way cooks view kitchens. At Cosme, I want every cook to feel confident to ask questions and admit mistakes, without being afraid. Confident cooks make food taste better! I believe in accountability and also know how stressful service can be, but I don’t believe that you can’t also enjoy the ride. Cosme’s kitchen should be like home, it should reflect how warm Mexico is and how amazing our team is.

We definitely run a serious kitchen that is very demanding. I worked under Enrique at Pujol in Mexico City before Cosme opened, and was influenced by the structure of a high-functioning, fine-dining kitchen. It’s so important that we all listen together to the pace and needs of our guests, especially during a busy service. But prep usually looks and sounds different than most places. We like to listen to good music and have fun with each other. Smiling happens. We’re all focused, but we see this as our time to enjoy ourselves, so the guests can then enjoy themselves and the positive energy we’ve put into preparing their dishes. JBF: Now that Cosme has been open for over a year, what do you think it has added to the conversations around food and dining in New York City? How do you think your cooking has affected the way Americans view Mexican cuisine?

DSI: We have always done our best to respect New York City, its culinary traditions, and how tough it is to be successful here. We have also always known that if we weren’t ourselves, Cosme would never become what we wanted it to be. So when we started, we kept it simple, highlighting ingredients from our local surroundings while also honoring a few key products from Mexico that just weren’t the same anywhere else. Like the meringue—we cooked what made us happy. I don’t think we could have known how some ingredients or preparations would take off like they did.

One of those things was corn. There is so much of it all around us in the U.S., but nothing about its flavor reminded us of our heritage. Tortillas are so important to what we do at Cosme and to Mexican cuisine in general (we make more than 1,000 tortillas a day!). We were blessed to have such an inspiring and dedicated company as Masienda [Cosme’s masa supplier], which started its business at the exact time we were planning to open Cosme. We have worked closely with Masienda from the beginning, which sources its corn directly from family farmers in Mexico, where it’s been grown for forever. When good people want to work with you, it makes you want to do the best for them. We bought the best corn grinder we could find in Mexico and customized it to meet the standards for New York City. The results were something I don’t think anyone here had ever tasted before. It has been so rewarding to see how tortillas, a common item that no one really thinks twice about, could be considered a unique and complex food in the States. Our guests and even our cooks had no idea before how much work goes into making them! We now even have cooks who come to Cosme just to stage with our tortilla-maker, Zita! It’s also so wonderful that this ingredient we buy so much of is creating opportunities for Mexicans back home. It was a moment that made me realize how much cooking could potentially impact lives outside of our restaurant. We work to make these connections for our guests, and create a new identity for ourselves, not just in the Mexican culinary world, but in the culinary world as a whole.

DSI: I will be there! I am very excited to visit one of my favorite chefs, Rick Bayless, and try the new menu at Topolobampo. He has been such a huge supporter of everyone at Cosme, and he really paved the way for delicious Mexican food in the U.S. I would also love to meet fellow nominee Jenner Tomaska and taste the Alps at Next. I can’t wait for their South America menu. 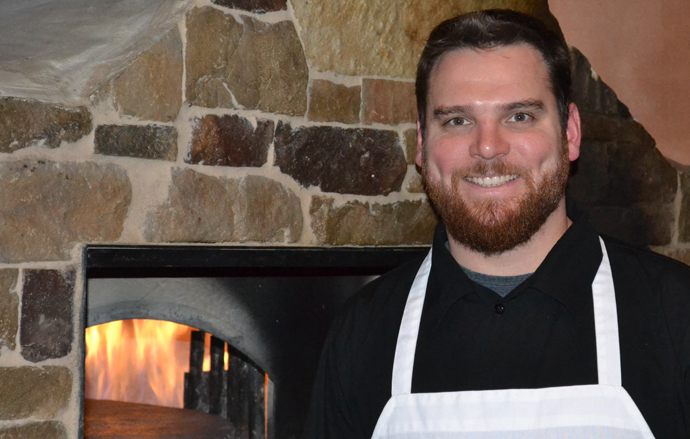