Letter from the President: The Female Factor Now that the 2013 James Beard Awards are a wrap, it's time for me to hit the road. Next week I'm heading to Chicago for the National Restaurant Association Show, where I will join restaurateur Rohini Dey, chef Mary Sue Milken, chef Lorena Garcia, and moderator/Chicago Sun-Times' Splash editor Susanna Negovan for a panel called "Secrets of Success From Top Women in Food" on Tuesday. I'm so excited to discuss my experiences in this industry, and to also share some news about what our Foundation is doing to help women move up in the culinary world.

James Beard was well known as a supporter and friend of influential women chefs, cookbook authors, and food personalities including Julia Child, M. F. K. Fisher, and Alice Waters. He relished the fact that women were carving a distinct place for themselves in professional kitchens around the country. In the decades since his passing, we’ve seen the rise of many female culinary powerhouses, but the fact remains that leadership roles in the food industry, like those in the business world, are still mostly filled by men.

I think that James Beard would applaud our new Women in Culinary Leadership program, which was created in partnership with restaurateur Rohini Dey to encourage more women to seek roles at the helm of the food world.

We kicked off this program last fall at Rohini’s New York City restaurant, Vermilion, with a spectacular panel discussion about how women can break through the glass ceiling, featuring Martha Stewart, Dorothy Cann Hamilton, Lidia Bastianich, Rohini, and me. Our moderator was Emmy– and James Beard Award–winning CBS News anchor Martha Teichner.

In February Rohini and I helped judge a spirited Women in Culinary Leadership Cookoff along with Dorothy Cann Hamilton, chef Aáron Sánchez (the son of legendary chef and 2013 James Beard Foundation Who’s Who inductee Zarela Martinez), and Lauren Bernstein, director of the International Diplomacy Initiative. This competition was created to identify talented women who aspire to operate and own their own culinary businesses.

Eight finalists executed their recipes in the cookoff, and Elizabeth Kozemchak and Raechal Maat were the recipients of our first JBF/Vermilion WICL Internship Grants, each winning a one-year mentoring apprenticeship at Vermilion’s locations in New York City and Chicago and a $500/week grant. They will also spend one week interning at the James Beard House alongside our guest chefs, who prepare one-ofkind dinners more than 200 nights each year.

I’m sure James Beard would agree that a woman’s place is not only in the kitchen, but running it, too! If you're planning on attending next week's NRA Show, I encourage you to attend our "Secrets of Success From Top Women in Food" panel. 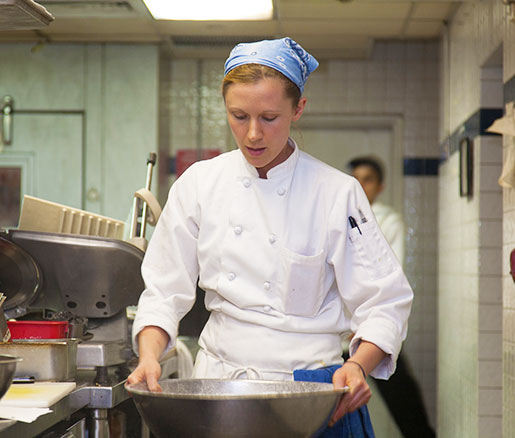