Our industry is in crisis. The COVID-19 pandemic has already permanently shuttered more than one percent of restaurants, forced millions into unemployment, and left chefs, owners, and workers struggling to imagine what the future looks like in the near and long-term. As the industry looks to rebuild, we're sharing stories from the front lines of businesses reacting and adapting to this new landscape.

Below, Louisvlle, Kentucky chef and educator Nikkia Rhodes shares the journey to finding her calling as a high school culinary instructor, and how the support of key mentors in her life inspires her to reimagine the path for her current and future students, even in the midst of a pandemic and protests for racial justice. Rhodes also leads the team at McAtee Community Kitchen, named for "beloved BBQ chef" David McAtee who was fatally shot by law enforcement during protests in response to the killings of Black individuals across America. The kitchen is dedicated to McAtee's legacy of helping the people of his community.

“Sometimes it's about who you know that gets you where you need to be. If you can just get your foot in the door, you can learn the skill later.”

That’s how I break down mentorship to my culinary arts students at Iroquois High. I let them know that—no matter if they want to become the next big chef, basketball star, or a cosmetologist—it's not what you know, but who you know. Who you know can open doors you never knew existed. I often think about how powerful mentorship is and how influential it can be in a young person's life. This year, I’ve been working with my students at the McAtee Community Kitchen, teaching them how to use their talents to help others. I look at them and wonder where I would be without the many mentors I’ve had along my journey.

When I was 16, I knew exactly what I wanted to be when I grew up: I wanted to be a high school culinary arts instructor. I could barely drive a car, but I already knew the impact that the adults in my life had on me, and how powerful that could be for the next generation.

Before I dreamed of being a culinary instructor, I thought I wanted to be a writer. I was good at it and, in my mind, if you’re good at something, you use that to make money. But then I started taking culinary classes as a freshman. Cooking felt natural, and I loved how I could make something new and have it come out perfectly on the first or second try. I had never imagined cooking as a real career, even after watching my mother work in the industry for years. I only thought it counted if you made it onto television.

A representative from Sullivan University visited my high school culinary program and changed everything for me. I began to look closer at all I had been learning about food systems and I thought about my teacher, whose job it was to teach us how to transform ingredients into a meal. It was a pivotal moment in my life where two adults cared enough to expose me to an opportunity. I applied to culinary school my junior year of high school and was taking college classes towards a degree as a senior.

It feels like there are two different camps in the culinary world: you either were classically trained at culinary school, or you weren’t. Not that there's anything wrong with one or the other. You can learn a ton from just practicing, reading, watching, listening to others, or hanging with family and friends. For me, culinary school was invaluable. It taught me technique, skill, and employability; it also connected me to networks and opportunities that I may never have found on my own.

By 18, I was juggling high school and culinary classes at the local community college. One day, my instructor Pete Thompson and Louisville Education and Employment Partnership (LEEP) director Linda Witt told me about two jobs. One was at a prestigious local hotel, and the other was for chef Ed Lee.

People had been telling me for a few months about this famous chef who had been on television and wanted to train local youth. I didn’t know who this guy was, but I knew the hotel name had a lot of weight. I tried for the hotel, and didn't feel confident about it, so I asked chef Thompson what he would advise. He connected me with the executive chef at one of Ed Lee’s Louisville restaurants, and the rest is history. I ended up exactly where I was meant to be, because my mentor nudged me in the right direction.

In my career as an adult, I have struggled to go for the next big opportunity. My instinct is to play it safe, but there is always someone else who sees something in and me pushes me to the next level. I never imagined running two kitchens simultaneously, teaching high schoolers during a global pandemic, and protesting in the streets for justice for Breonna Taylor, who attended the same high school as me.

Monday to Friday I split my time between the high school and McAtee Community Kitchen, spending the morning in the classroom and the afternoons helping to feed around 600 families each week for free. We started the kitchen as a way to help heal our community and provide continued training and employment opportunities to my students. Keeping them engaged can be challenging in our new virtual format, but through food I’m still able to connect with them. Through food we’re able to have conversations about what's going on in our city and our country—and how we can be a part of the solution.

What would our culinary industry look like if we cultivated these relationships earlier? Instead of starting at 16, what if we could light a fire for an eleven-year-old? If we begin culinary training in middle school, we could really elevate the next generation.

Before teaching high school culinary arts, I taught at a local cooking school for children aged two to 17. It's amazing what kids of all ages can do when it comes to food. They are creative, fearless, and eager to learn. They are practicing math, science, and literacy skills, while also building healthy relationships with food. The benefits are countless, yet the biggest one that stands out to me is the chance to connect with multiple mentors over the course of their education.

A student entering the sixth grade could be exposed to the culinary world by simply preparing some fresh foods and going on a few field trips. Guest speakers offer even more connections. I often invite military culinary professionals, food distributors, health department officials, and firefighters to talk about their jobs and how they relate to food. By the time a student graduates they will have so many local connections to food-related jobs, their network will be full of opportunities.

Earlier exposure to the different paths of almost any career leads to a more confident, capable workforce. It just takes the right people to see something and provide opportunities for students to see the world in bigger ways. No matter what job you have, we all need to eat. Exposing youth to the food industry and pairing them up with mentors gives them the chance to decide what path they want, and access to people who can help guide them.

My story proves that you can be successful just by passing on knowledge and feeding the community.

Nikkia Rhodes is the director of the Iroquois High Culinary Program in Louisville, Kentucky. Rhodes also oversees the McAtee Community Kitchen, a Lee Initiative Program. Find out more at leeinitiative.org.

Learn more about our efforts to keep independent restaurants open for good. 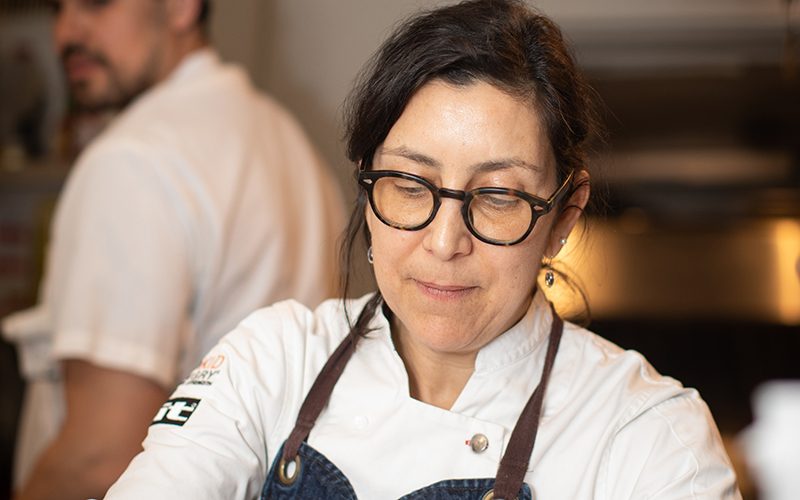