Chef contestants in the Sodexo Recipes for a Better Tomorrow competition

As one of the largest foodservice companies in the world and one of the Founding Partners of the James Beard Foundation Annual Food Conference, Sodexo is committed to finding ways to maintain the high quality and nutrition of the 50,000,000-plus meals the corporation’s 15,000 chefs prepare daily. To that end, this May the James Beard Foundation hosted the final cook-off and judging for their Recipes for a Better Tomorrow culinary competition. The Beard House welcomed five finalists from the U.S. and Canada representing five divisions of Sodexo North America. We were joined by Sodexo’s culinary leadership within Sodexo and guest chefs like Sodexo’s Matthew Weingarten, chef of Manhattan’s Inside Park, and Barton Seaver, chef/owner of DC’s Hook and author of the newly released For Cod & Country. To enter the contest, more than 150 chefs submitted recipes and described the nutrition and environmental benefits of the dishes. These were culled to twelve semifinalists by Sodexo’s culinary council—a board of leading chefs within the company.  Semifinalists were voted on by a diverse set of people, including Sodexo employees, college students, residents in senior living communities, friends, family, and more. The five finalists were selected through this public voting process. The five finalists, in alphabetical order, were (click on the chef name to view the video and the dish to see the recipe): Joshua Chandler, Westminster Canterbury – Shenandoah Valley Cider-Glazed Pork Loin with White Sweet Potato and Carrot Swirl Purée Andrew Cox, Harvard Kennedy School All-Natural Vermont Roast Turkey with Organic Quinoa Pilaf, Citrus-Poached Beets, and Beet Greens Leanne English, University of New Brunswick Ginger Salmon with Citrus, Coriander, and Maple Glaze, Roasted Fingerling Potatoes, and Sautéed Fiddleheads Jesse Kraft, St. Barnabas Medical Center Pan-Seared Cod Fillet with Beet Vinaigrette and Pumpkin–Quinoa Risotto Jason Murchison, Napa Valley Unified Schools Chocolate and Espresso–Braised Pork with Jasmine Rice with Grilled Sweet Corn–Avocado Salad The judges—Bill Telepan, chef/owner of Telepan and founder of the nonprofit Wellness in Schools, Arlin Wasserman and Thomas Mackall of Sodexo, and Susan Ungaro and Mitchell Davis of the James Beard Foundation—were truly impressed. The finalists did a great job of showcasing regional flavors, including significant quantities of fruits and vegetables, introducing underappreciated ingredients, and using more parts of the plants and animals that we harvest to reduce waste and increase the diversity of our diet.  But at the end of the day there has to be a winner.  The panel selected Murchison’s braised pork shoulder this year. The contest will continue next year and we will look forward to what Sodexo’s chefs will bring to the table. 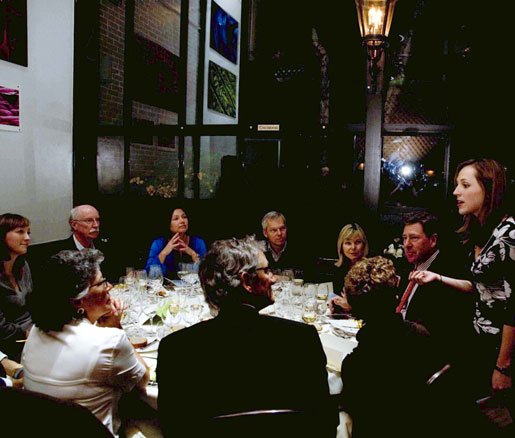 On the Menu: Week of December 15