In preparation for our 2012 JBF Food Conference, A Crisis in Confidence: Creating a Better, More Sustainable Food World We Can Trust, we're holding regional salons around the country to discuss the notion of trust in our food system. Our conference season officially kicked off this spring in Charleston, and then moved to New Orleans this summer, where we met with a diverse group of 18 insightful chefs, farmers, restaurateurs, educators, and other members of the local food community at Palace Café. We chatted with JBF executive vice president Mitchell Davis (who facilitates the salons along with food system consultant Karen Karp of Karp Resources) and he filled us in on the conversation.

JBF: Can you tell us a bit about why you host these regional salons?
MD: Holding meetings around the country allows us to bring people working in various aspects of the industry together to discuss important matters in our food system. We listen for issues specific to the local area and for common themes across the country to inform our agenda for our annual food conference in October. It also helps us make sure that geographically, ethnically, and philosophically diverse voices are represented in the Foundation's work.


JBF: How are the salons incorporated into the food conference?
MD: We develop and work on the themes for our conference in these free-flowing conversations. For instance, the theme of trust in the food system (this year's topic) emerged in conversations during these salons. Underlying many of the challenges discussed were fundamental issues of whom, why, and what we trust—or don’t. We thought that looking at the way we build trust, break it, rebuild it, or work around it might be helpful to folks working at all different junctures of the food system.


JBF: Who attends the salons?
MD: We work hard to invite a diverse group of people and perspectives. We have chefs, of course, and farmers. We invite folks from municipal and state government offices, urban planners, academics, people who work in food distribution, folks working on community gardens, and in nonprofit, social justice, and food equity organizations. We've had clammers, restaurateurs, marine biologists, and geneticists. We try to include people representing large food companies, too. The idea is to bring as many distinct opinions to the table to have an open dialogue so that we can begin to understand the complexity of the issues people face. The nature of the group changes from location to location, obviously, but the goal of diversity is always important.


JBF: The theme of this year’s conference is A Crisis in Confidence: Creating a Better, More Sustainable Food World We Can Trust. How did issues of trust emerge at the most recent salon in New Orleans?
MD: A major trust issue that arose was the waste of effort and money expended after Hurricane Katrina with so many nonprofits descending on the city, all working on similar issues but not collaborating because they didn’t trust each other. Katrina and the BP oil disaster caused many people to distrust the institutions that are taken for granted in other places, such as large industry and government. Among the business folks at the table, there was a lack of trust expressed in the role that government regulation might play in fixing some of the food system issues, as well as a lack of trust in the motivations behind some of the larger food companies' recent interest in issues about local, sustainable food.


JBF: Did anything come up in the conversation that surprised you?
MD: Given how important Gulf seafood is on the economy of the region, I was surprised that some people around the table weren't concerned with the aftermath of the BP oil spill or even with the possibility of overfishing in the region. I made a note to look into the situation more closely. While there are obviously some aspects of government that locals don't trust, others (such as the government proclaiming the safety of the local seafood supply) are trusted implicitly. Trust is very complicated, as are local food cultures.


JBF: If you had to choose one valuable thing to take away from what you learned during the NOLA salon, what would it be?
MD: The way to build trust varies tremendously from one place to the next because it is contingent on so many local factors. Every city has a unique history and a unique cultural relationship with its food. There are certainly aspects of trust-building that apply across the board, but to be effective, national policies, companies, and even trends must take the unique aspects of different localities into account.


JBF: What brought you to Palace Café?
MD: Palace Café is owned by one of the James Beard Foundation's trustees, Dickie Brennan, whose family is part of the great hospitality heritage of the city. We had a lovely lunch prepared by chef de cuisine Ben Thibodeaux and his team, who also joined the conversation. I had several helpings of deviled crab.


JBF: Any other restaurant recommendations from your time spent in NOLA?
MD: We weren't in New Orleans very long, unfortunately, but I had a great lunch at Cochon and a lovely dinner at August—both helmed by JBF Award–winning chefs, Donald Link and John Besh, respectively. In fact, Besh will be with us in New York this fall to host the second annual JBF Leadership Awards ceremony on October 17.


Stay tuned for an update from our next salon, which will take place in Detroit next month. Our upcoming JBF Food Conference and Leadership Awards will take place on October 17 and 18 at Hearst Tower in New York City. To receive updates and registration information, send us a note at foodconference@jamesbeard.org. 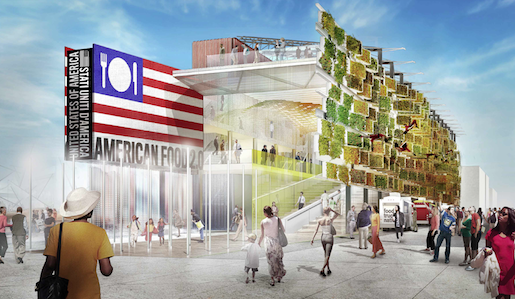 Expo Milano: Vote for Our Panel at South by Southwest Interactive