The Cookbook That Changed My Life

What Would Mrs. Van Dai Do?

When we talk about the potential of American cooking, we don't just mean what's being served in restaurants around the country. Home cooking plays just as big a role in our ever-evolving food culture, and those who devote themselves educating and celebrating the domestic kitchen deserve a turn in the spotlight for their efforts. In this series, we're featuring James Beard Foundation Award–winning cookbook authors and exploring the books that most influenced the way they cook, eat, and write. In the first installment, Vietnamese cooking authority Andrea Nguyen, winner of a 2018 James Beard Foundation Award for Pho (Ten Speed, 2018), describes the cookbook that looms largest in her life—a Vietnamese classic called Làm Bếp Giói by Van Dai.

Làm Bếp Giói (which translates roughly to "How to Cook Well"), published in the early 1940s in Vietnam, was the equivalent of the Joy of Cooking. It was written by Mrs. Van Dai, a poet and an author who was also a cook. The work means a lot to me, to my mom, and to cooks of her generation. To this day, when my mom and I talk about cooking, we always reference Mrs. Van Dai.

(In Vietnamese, when we refer to someone, there's always an honorific. In my latest book, Vietnamese Food Any Day, I refer to her as "Van Dai." But it feels wrong, because I should really be calling her "Older Person Van Dai." So my shortcut in English is "Mrs.")

When my family fled Vietnam in 1975, we were fortunate to resettle in America pretty easily. We left on a plane, but with very few possessions. Among seven people, we brought just a small valise, plus what my mom could stash in her handbag—including a notebook of handwritten recipes. But once we made it to America, she was intent on getting her hands on a copy of Mrs. Van Dai's book, because that was her manual. She was like, "If I'm going to make food for my family in America, I need recipes."

Someone had brought a version to the United States, and started photocopying all the pages and distributing it in the Vietnamese expat community. We kept our copy in a three-ring binder. Eventually, Vietnamese publishers in the U.S. created bound bootleg copies of the cookbook. I got one at a bookstore in Little Saigon in Orange County, California, close to where I grew up. Years later, I bought a newer iteration in Vietnam. Recently, friends brought me a copy from Vietnam that was published in 1970. Somehow this book has remained a constant throughout my life.

Mrs. Van Dai’s writing is very concise and makes you feel confident that you could do it. You could read her recipes and imagine the flavors and textures. Her beef pho recipe was the equivalent of a half a page long, because you were expected to know how to make pho and what it's supposed to taste like. But there was a section in the book on making French food, with a mayonnaise recipe that’s about twice as long as the pho recipe, because for Vietnamese people, making mayonnaise was an oddball thing.

In my work, I use Làm Bếp Giói as a touchstone to explore the foundations of Vietnamese cooking. Whenever I'm tweaking an old recipe or developing a new one, if I'm unsure about what I'm doing, I go back to Mrs. Van Dai's book to figure it out.

When I was writing Vietnamese Food Any Day (Ten Speed, 2019), I wanted to present people with home-cooking recipes that they wouldn’t necessarily think of as Vietnamese, but actually are. I was also obsessed with coconut water, which is a traditional cooking ingredient in Vietnam. We have coconut trees all over the place, and you just get a coconut, cut it open, and have potable, mildly sweet water to cook with. Vietnamese Americans have for a long time used this sweetened coconut water that I absolutely hated, because it tastes very artificial. But nowadays, coconut water is all over the place, and people consider it a refreshing sports drink! So for this book, I wanted to push the notion that we now have a common ingredient in the U.S. that is very authentic for Vietnamese cooking.

I went back into Làm Bếp Giói and found a simple recipe for little game birds: Mrs. Van Dai has you rub rice wine all over them, season them, let them sit, and then she browns the birds in fat, and pours a coconut's worth of coconut water in the pan. Then she covers and cooks it until everything is reduced. As she says in Vietnamese, the coconut water will concentrate down, almost like honey, around the bird, and when it’s golden, the bird is done.

I didn't have little birds, but I thought, “let’s find something gamey-tasting that's easy for people.” So I used chicken thighs, and came up with the coconut-kissed chicken and chile recipe that's based on her technique. You just cook down the poultry with coconut water, and let its natural sweetness blend with the flavoring. This is a recipe based on an idea from the 1940s, that to me speaks so much of what good food writing and what good cooking is all about. 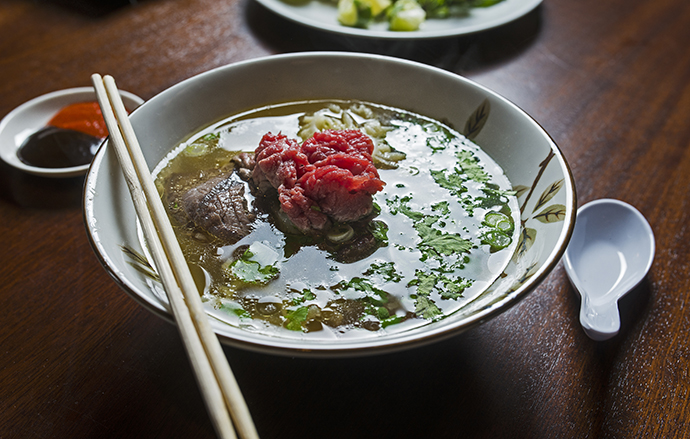 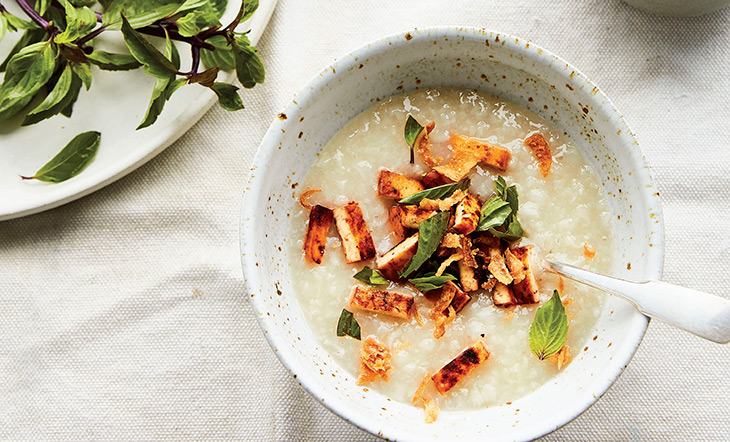