In order to qualify, a restaurant or dining space’s design must have remained substantially unchanged for at least 20 years and must have influenced and inspired the design of subsequent restaurant and dining spaces. Additionally, the restaurant/dining space must still be in operation.

On Valentine’s Day in 1974 the utterly unique American Restaurant opened atop the Crown Center in Kansas City, Missouri. No one had ever seen a restaurant anything like this. Designed by Warren Platner, it became the conceptual parent of all the "over-the-top/top-of-the-building" restaurants that followed, including some by Platner himself.

Platner described the American Restaurant as “bridging the contrast in scale between the great volume of space and the minute detail of food and tableware, between public gathering and personal intimacy, the design entertains the diner and gives distinction to the server in this emporium of elaborate meals.” Over his career Planter worked alongside the design legends Eero Saarinen, Raymond Lowey, and I.M. Pei. Two years after the American Restaurant opened, Planter went on to design the legendary Windows on the World in the North Tower of the World Trade Center.

One travels to the American Restaurant by elevator, arriving at the very top of the three-story restaurant in a carefully designed but modest entry space. As the visitor enters the restaurant the grand 6,500 square foot room is dramatically revealed as the terraces cascade down and away from the guests creating an enormous glass lined theater with views to the city visible below. While elements have been altered in the intervening decades the largest gestures, including the wood decorative elements, remain intact.

The American Restaurant serves up a range of dining experiences from pop-ups to events, all under the signature wood tracery canopy that defined the space in 1974 as it does today. The lacy Gothic-inspired bentwood above not only lends a "dining under the trees" feel, but, because they line the ceiling, make for an intriguing view from the street below. Miles of wood louvers cover the sheets of glass adding to the sense of tree-filtered light and making a very large space feel quite intimate.

Built and still owned by the Hall family, of Hallmark Cards, the design is as much a confection as a considered shaping of space, form, light, and color. And because it was produced by Joe Baum, collaborating with James Beard, Barbara Kafka, and a host of other luminaries, it was, and is, as much a dining event as a design event. The American Restaurant has produced a long line of James Beard Award–winning chefs, but this recognition celebrates the enduring and endearing grandeur of, as it is now known, the American Restaurant.

The Design Icon Award is decided by the Restaurant Design Committee. 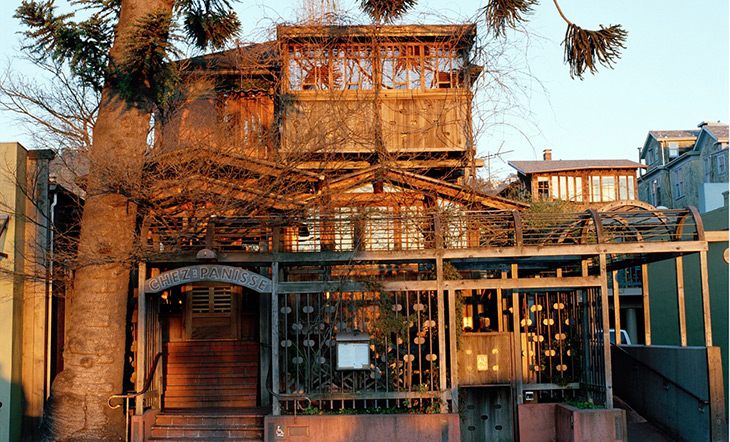