Dana Cowin stopped by the Beard House this week to discuss her new book for the latest installment of Beard on Books. The 20-year editor-in-chief of Food & Wine charmed the standing-room-only crowd with excerpts and stories from Mastering My Mistakes in the Kitchen, which combines recipes and tales of cooking mishaps with tips and tricks.

Susan Ungaro, president of the James Beard Foundation, introduced Cowin with high praise of the chefs’ helpful tips included in the book, specifically when it came to Thomas Keller’s secret to roast chicken: “I’ve read his version of his recipe, but I didn’t understand it until I read her version.”

After a slight microphone glitch (“The kitchen here is the place for technical mastery,” Ungaro quipped), Cowin held the audience’s attention for the next 45 minutes with self-effacing tales of helming a food magazine without any culinary training.

“Your first question might be: How’d you get the job? If you think back 20 years, it wasn’t the food-obsessed culture it is today,” Cowin said before recounting her rise through the ranks editing horoscopes and the wine column at Vogue, and as an editor at House & Garden and Mademoiselle.

“The reason they hired me at Food & Wine is because I knew about lifestyle, and they never asked me to cook...My skill was at making reservations. I was popular among my friends for knowing what was next. Food & Wine is about looking ahead, showing trends, and wine, design, and travel as an integrated life.”

Cowin had the Food & Wine test kitchen behind her as she began to experiment in her home kitchen—specifically in her quest for the perfect chocolate chip cookie, one that is just crispy and not too fluffy.

“I’ve had more lessons on chocolate chip cookies than any other food.” Every time she brought them to the test kitchen, they had a different explanation for what went wrong. She’s since perfected the recipe but wouldn’t reveal the secret at the talk. Fortunately, we got her to give it up.

“Eighteen years in, I decided I should learn to cook. I felt I couldn’t go to cooking school. That would be embarrassing. I would take my lessons one by one with chefs. I gathered the 100 recipes I love but had problems with and I found a chef to help me with each one.”

“I’m not going to name-drop; I’m going to tell stories.”

Cowin approached James Beard Award winner Jean-Georges Vongerichten for help with her beet salad, which she’d been preparing by roasting the beets and poking them to test their doneness.

She asked, “How to roast the beets and keep the flavor?”

He asked, “Why are you roasting the beets?” then explained that home cooks should boil their beets because it’s faster and you can tell when they’re done.

What about the flavor and color bleeding? “He just overruled. These chefs can be very practical.”

Ripert and the Lobster

Her hardest moment during cookbook production came while preparing the pan-roasted lobster with red miso and citrus sauce: killing the lobster with JBF Award winner Eric Ripert watching. Ripert only kills lobsters with a large knife to the spinal column, but as Cowin stood with the knife poised at the crustacean, she had to back away. “Eric, you have to do it.”

After he completed the task, Ripert told her, “Dana, your mind was everywhere but the tip of the knife.”

“He was not wrong. There was all that doubt instead of focusing.”

“I can never forget this idea of focus. Most of the time when we make mistakes in the kitchen, it’s because our mind is somewhere else.” 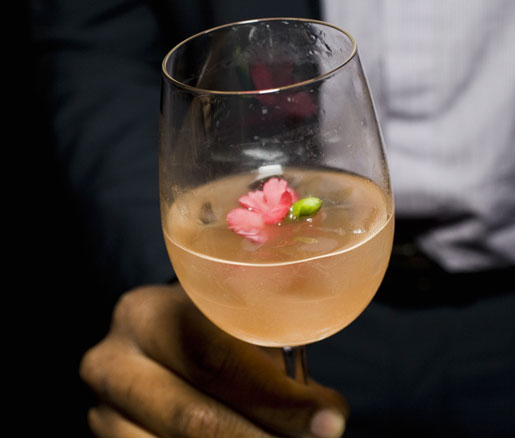 On the Menu: Week of September 7