How a Pot of Soup Changed This Chef's Life

Our latest piece comes from Liz Alpern, chef, cookbook author, and co-owner of The Gefilteria in New York City. Below, the Chefs Boot Camp for Policy and Change alum shares her motivation for founding Queer Soup Night, and her belief in the power of chefs to connect communities and create change locally, and beyond.

On November 9, 2016, I woke up with a queasy feeling in my stomach and a head full of thoughts of soup. Like so many Americans, I was deeply shocked by the results of the election—especially as a queer person. I felt concern over what it might mean for myself and my LGBTQ+ family (not to mention many other marginalized groups). Making a pot of warm, comforting chicken soup seemed like the obvious thing to do.

In the ensuing weeks I frequently had soup on my stove. And in my free time I went searching for ways to get involved in the political resistance work that was gaining momentum all around me. But as a chef, cookbook author, and co-owner of the Gefilteria, I was overwhelmed by the sheer number of entry points I saw into the activist space. I wrestled internally over how I could use my skills and networks to make an impact on what I saw—a political regime hostile to minorities and a growing divide between friends and neighbors. I’d never been particularly articulate about politics, and I had seen so many activist friends burn out.

But this was going to be a long four years (and beyond). Burnout wasn’t an option. Neither was silence.

Fast forward to January 2017. I held my first Queer Soup Night (QSN) in Brooklyn, a party bringing together the queer community to raise funds for local social justice organizations. Soup had nourished me during the preceding months, and I knew that many queer folks were craving that same feeling of comfort in the wake of so much uncertainty.

At that first party I made big pots of chicken noodle, butternut squash, and spiced lentil. I spread the word to my close friends. To my surprise, dozens of guests showed up and donated about $10 each. We ate together until most of the soup was gone. And by the end of it, we’d raised over $700 for CAIR-NY (Council on American-Islamic Relations). Everyone was already asking when the next Queer Soup Night would be.

Three years later, there are QSN chapters in over 16 cities, each led by local chefs following the model we developed in Brooklyn. We’ve held over 72 events around the world, featured dozens of up-and-coming LGBTQ+ chefs, raised over $70,000 for local organizations, and served over 10,000 bowls of soup. The organizations we are supporting are highlighted at the events, offering guests a window into the work they do.

Over time, I’ve built a team locally to support the effort, and we’ve refined the model to make it relatively easy to implement elsewhere. Needless to say, I don’t make all the soup anymore, though my strong relationships with all of our chapter leads makes me feel like I have a small hand in each and every bowl.

Queer Soup Night is guided by a few simple principles:

QSN has touched lives in ways that I never could have imagined on that distressing morning in 2016. And I’m constantly leaning on our successes when I need a dose of optimism to keep me going. One of the most encouraging parts of this endeavor has been connecting with chefs who also felt the call to combine their values and convictions with their skill in the kitchen. QSN continues to learn from other chef-led initiatives happening all over North America.

Chef Kurt Evans, for example, started the End Mass Incarceration Dinners in Philadelphia in 2018 to raise funds and consciousness about the prison system and its effect on communities of color. These dinners created a unique space for conversation and have raised thousands of dollars for Philly-area organizations. Kurt is now culinary director of Drive Change.

Julia Turshen started Equity at the Table, a database of food industry professionals featuring only women/gender non-conforming individuals. This directory is meant to reset the disparity in the industry, and it has led to thousands of job connections, collaborations, and events.

What do all of our efforts have in common? They are part of a push by chefs to cultivate community based on shared values, and, in so doing, counter the polarizing, zero-sum attitude so prevalent in today’s news reports and political speeches. Coming together means more than simply sharing a meal, no matter what your political beliefs. It’s about how we set the table, welcome our guests, and sit down with our guests that really forges the change we need right now. QSN was born of a time of extremes, and we aim to swing the pendulum to a place where large swaths of our communities no longer feel actively threatened, and where each of us sees our successes bound with the successes of our neighbors.

My life has been profoundly transformed by soup, and I encourage my culinary colleagues to find your own symbol of resistance, make a big pot of it, and invite everyone you know.

Liz Alpern is the creator of Queer Soup Night, co-owner of The Gefilteria and co-author of The Gefilte Manifesto: New Recipes for Old World Jewish Foods. She is based in Brooklyn, NY. 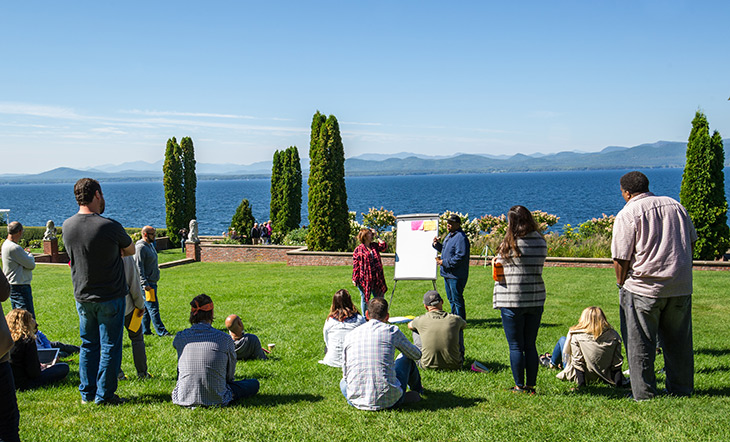